Stronger than expected tax payments this spring led the Governor’s Division of the Budget (DOB) to increase its personal income tax (PIT) revenue projections for the next four years by $8.5 billion above its April projections. That’s according to the office’s very belated release yesterday of its First Quarter (Q1) Update to the Fiscal Year (FY) 2022 Enacted Budget Financial Plan.

DOB revised upward PIT revenue projections by $2.15 billion for this year, and by $2.13 billion for each of the ensuing three years of the financial plan window. Those increases are atop the already-elevated levels DOB originally estimated to result under the April budget’s high-earner PIT rate hikes, which it forecast to raise revenue by $2.8 billion in FY 2022 alone.

The new DOB projections piggyback on a series of Comptroller’s monthly cash reports issued since April that show actual PIT receipts running billions ahead of projections for the first four months of FY 2022.

While surging PIT revenue bolsters the near-term budget outlook, these receipts remain extremely volatile and difficult to forecast, since they are so dependent on capital gains of top-earners, as well as fluctuations in the broader economy.  Continued Covid concerns and the potential of remote work to further increase out-migration of high earners creates even more uncertainty.

Most of the additional revenue estimated by the Budget Office ($5.7 billion out of $8.5 billion) in the Q1 Update is directed therein to “reserve” accounts. Unfortunately, only $770 million of that would be squirreled away in the state’s underfunded Rainy-Day fund. The majority would be “reserved” to fund public employee salary increases arising from labor settlements as well as general agency operating expenses. A total of $2 billion is used to reduce existing outyear budget gaps in FY 2024 and FY 2025.

Notably, almost half of the additional revenue expected this year is already offset by $1.1 billion in new spending, including $286 million for the retroactive portion of a July agreement with the New York State Public Employees Federation locking in a two-percent annual pay increase for each of the four years from FY 2020 through FY 2023.  More ominously, the Governor announced today that the hiring freeze on state employees is being lifted for the remainder of the year; new hires will create recurring costs that consume revenue both this year and for decades to come.

A summary box on page 10 of the report captures the key revisions in the Q1 Update: 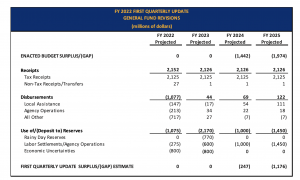 The state government received $12.7 billion in highly flexible general federal aid under March’s American Rescue Plan (ARP). The six-week reporting delay gave DOB plenty of time to use the Update as a vehicle to tell New Yorkers how that largesse will be spent over the next few years.  But DOB simply restates its original line that, “These funds are expected to be transferred to State Funds over multiple years to support eligible uses and spending.”

We still don’t know why the report was issued historically late.  But we know it wasn’t held up so that DOB could shed light on what may be the biggest spending mystery in the state budget.