The state government is suddenly flush with cash. It seems a distant memory that the Governor’s January budget contemplated significant spending cuts. Since then, an avalanche of Federal aid and a gusher of unanticipated tax revenue—most recently a $4 billion upside surprise in May’s tax receipts—put the budget outlook back in the black. A report issued by Comptroller Dinapoli last Thursday, however, flashes trouble ahead.

The dramatic reversal that shrank the state’s four-year budget gap from $38.7 billion in January to the current $3.4 billion occurred, incredibly, despite the Governor and legislature adopting a budget that increases state spending significantly in education and other areas. What turned the tide was a massive injection of federal aid—including $12.7 billion in no-strings federal aid awarded to the state in March under the American Rescue Plan—along with tax collections that defied earlier projections of vast, pandemic-induced revenue loss, and new tax hikes inflicted on high earners estimated to yield $2.75 billion in new revenue this year alone. As a result, the enacted budget financial plan the Governor’s budget office issued last month shows a balanced budget for this fiscal year and next. Even the red ink that starts accumulating in 2024 and 2025 looks manageable.

But looks are deceiving here. Extending the budget window—as does a chart on page nine of the Comptroller’s report, shown below—reveals large, yawning budget gaps growing from nearly $8 billion in 2026 to nearly $20 billion by the end of the decade. The dual expiration of American Rescue Plan funds in 2026 and a temporary hike in the PIT in 2027 sends the budget deep into the red. 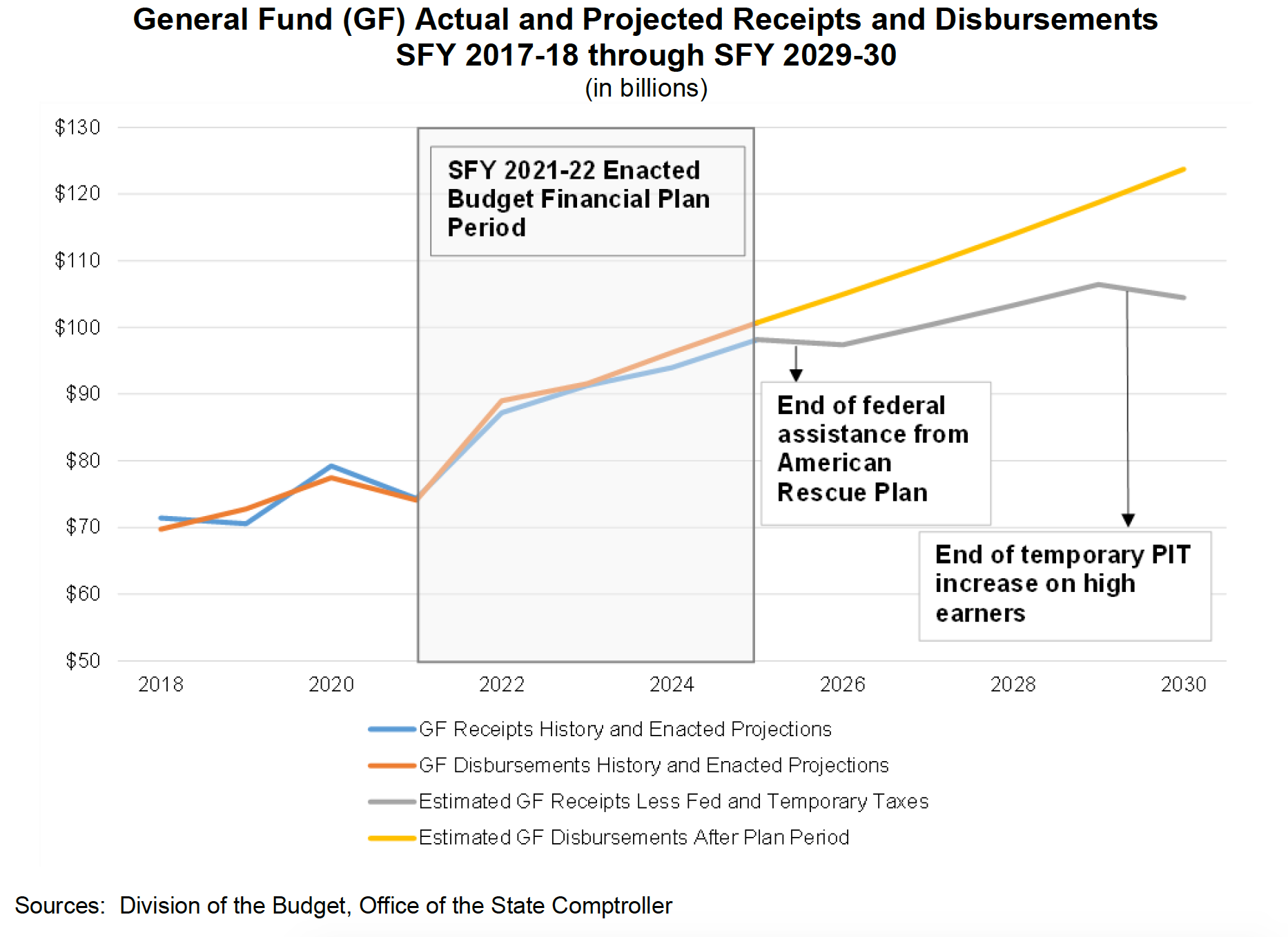 Even the nearer-term budget balancing act is a heavy bet on the PIT hikes, whose projected yield is highly uncertain. Data in the report explain why.

From 2015 to 2019, the 1.1 percent of New York taxpayers with $1 million or more in income paid 40-percent of the state’s PIT, and 30-percent of that cohort’s income from 2010 to 2019 came in the form of highly volatile capital gains. Further, the PIT hikes themselves risk accelerating the steady net out-migration of top earners the state has witnessed in recent years, depriving New York of the very revenue its budget increasingly relies upon: under the budget, PIT rises as a share of state revenue from 43.1 percent in 2011 to 55 percent in 2025.

The other dangerous assumption embedded in current budget projections is that Albany’s spending appetite will be sated by a temporary bonanza that quickly dissipates. The outlook assumes that overall spending from all sources by the state in 2025 will be lower—in absolute terms, not inflation-adjusted terms—than it is in the current year. For that to happen, New York would need to avoid backfilling expiring federal aid with state funds or extending its own “temporary” new initiatives. That’s a major test of fiscal restraint for a state with little demonstrated capacity.