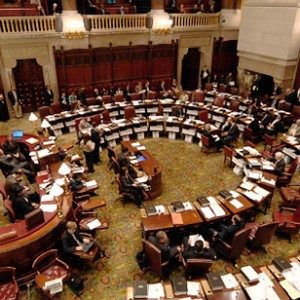 The property tax cap language in the 143-page Senate bill (S.5758) appears identical to the cap introduced May 24 by Assembly Speaker Sheldon Silver — except, in this case, the cap would be permanent, rather than linked to the effective date of New York City’s “temporary” rent laws.  The rent laws, in turn, would also be permanently extended.  By keeping all income, rent limits and other provisions related to “luxury decontrol” at current levels, rather than expanding them as proposed by Silver, the Senate approach would effectively phase out the impact of rent regs over the long term.

The bill would also, as summarized in the sponsor’s memo, “permanently authorize counties, cities, and school districts to impose sales and compensating use taxes at rates up to 3% and to preserve the current authority of counties and cities to impose such taxes at rates in excess of 3%.” These taxes are now temporary but are routinely extended by the state Legislature, so this would (it appears) effectively maintain the status quo, while depriving putatively anti-tax-hike state lawmakers of the headache of sponsoring them.

Then there’s mandate relief, which local governments insist should accompany the property tax cap.  On the one hand, the Senate sausage bill contains a few items that could help significantly reduce some pressure on local taxes, including a stronger “ability to pay” constraint on the rules governing compulsory arbitration of police and fire contracts, and a provision allowing counties to opt out of offering some optional Medicaid services. It would also modify the prevailing wage language used in public sector contracts in such as way as to make the playing field between union and non-union firms.

But the Senate avoids meatier proposals with wide support from school boards, counties and municipal leaders, especially repeal of the Triborough amendment.  It contains no pension reform to speak of.  And it actually imposes one costly new mandate on New York City, through the creation of a “421-L” property tax exemption for newly construction one-, two- and three-family homes worth up to $1 million, which would reduce the city’s tax receipts by $30 to $60 million when fully implemented.

The bill won’t be enacted, mind you.  Rather, it is most interesting insofar as it represents the furthest the Senate is willing to go on mandate relief, in particular. Which is both (a) much further than Assembly Democrats, and (b) not nearly far enough.