One out of every six police officers and firefighters retiring from state and local agencies outside New York City last year qualified for annual pensions of $100,000, according to state pension fund data posted today at SeeThroughNY, the Empire Center’s government transparency website.

The proportion of 2012 Police and Fire Retirement System (PFRS) retirees with six-figure pensions–a total of 202 out of 1,225 individuals–was the largest ever, according to an Empire Center analysis of data stretching back to 2000. As in previous years, the proportion of Employee Retirement System (ERS) members qualifying for $100,000 was much smaller—just 80 out of a total of 17,156, or 0.5 percent.

The pension for all employees retired in calendar year 2012 came to $69,379 for PFRS members and $24,855 for ERS members, including those who spent only a portion of their careers on government payrolls. However, newly retired PFRS and ERS members with at least 35 years of service were eligible for average pension benefits of $97,579 and $58,655, respectively, according to the system’s latest annual report.

Fully half of all PFRS retirees in 2012 qualified for a pension of more than $65,000 — meaning they can collect a retirement benefit larger than the salary for all private and public-sector workers.  The pension benefit is supplemented, in the vast majority of cases, by continuing taxpayer-subsidized health insurance coverage.

The pensions shown in the database are the maximum allowable benefits, which can exceed the amount actually collected by those retirees who, for example, opt to receive less in order to preserve some benefit for their survivors. Maximum benefits for the 376,509 retired state pension system members as of the end of fiscal year 2012-13 totaled nearly $8.9 billion – up nearly 6 percent from the $8.4 billion total in fiscal year 2011-12.

Click here for the full report including tables listing the top 100 pensioners and average pensions by retirement year and a graph illustrating growth of PFRS pensions. Click here to visit the database. 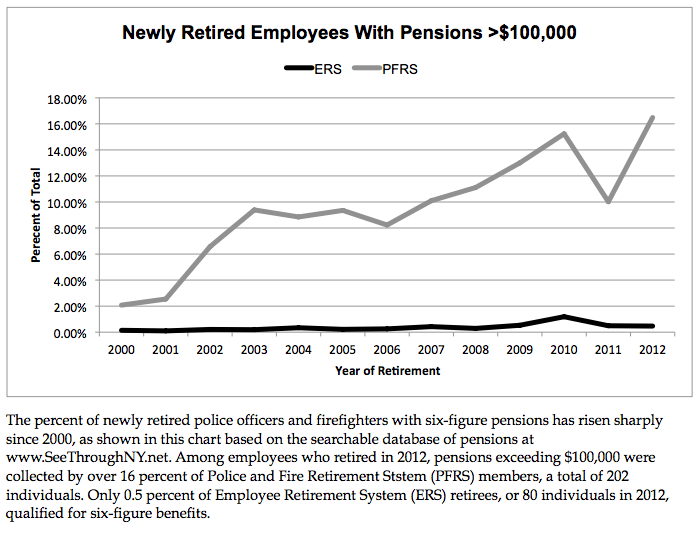 One in four NYSTRS educators earned six figures in 2018-19