The number of teachers and other school employees paid more than $100,000 by school districts outside New York City climbed to 49,834 last year, according to payroll data added today to SeeThroughNY, the Empire Center’s transparency website.

The number represents a 55 percent increase from 32,179 in 2008-09, the first school year for which data were posted at the SeeThroughNY site.

“Teacher pay is the largest component of school spending, and schools account for the biggest share of local property tax bills across New York,” said Tim Hoefer, executive director of the Empire Center. “Posting the pay of educational professionals helps taxpayers understand where the money is going, and to whom.”

SeeThroughNY’s searchable online database also has been updated to include the pay of 123,866 non-professional school district employees in 2014-15, including office staff, bus drivers and maintenance personnel. 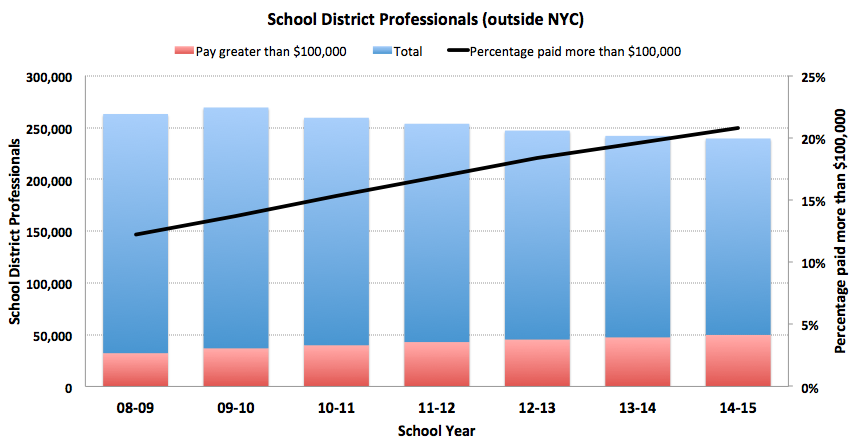 SeeThroughNY’s pay data are based on information reported by the districts to the New York State Teachers’ Retirement System, which covers all educational professionals employed outside New York City, and the New York State and Local Retirement System, to which other employees belong. While the highest pay generally goes to superintendents, the amounts also include added severance payments to retiring teachers and other employees.

The Empire Center is a non-partisan, non-profit independent think tank based in Albany. SeeThroughNY includes payroll and pension data for state and local government employees and retirees; detailed expenditure data for the state Legislature; comparative statistics on local government spending; a searchable database of state revenue and expenditures; and copies of all teacher union contracts and superintendent of schools contracts.