That was fast. Historically large budgetary surpluses inherited by Governor Hochul are now just a memory, with the state now facing projected budget gaps totaling $13.7 Billion over the next five years (FY 23 to FY 27), according to the First Quarter FY 23 Financial Plan Update assembled by the Division of the Budget (DOB) and announced at 6:59 pm last night by the Governor’s press office.

The new sea of red ink is due to an anticipated plunge in tax receipts resulting from the recent economic and financial market decline. Their creation of new budget gaps is shown in the table below, from page 11 of the DOB update: 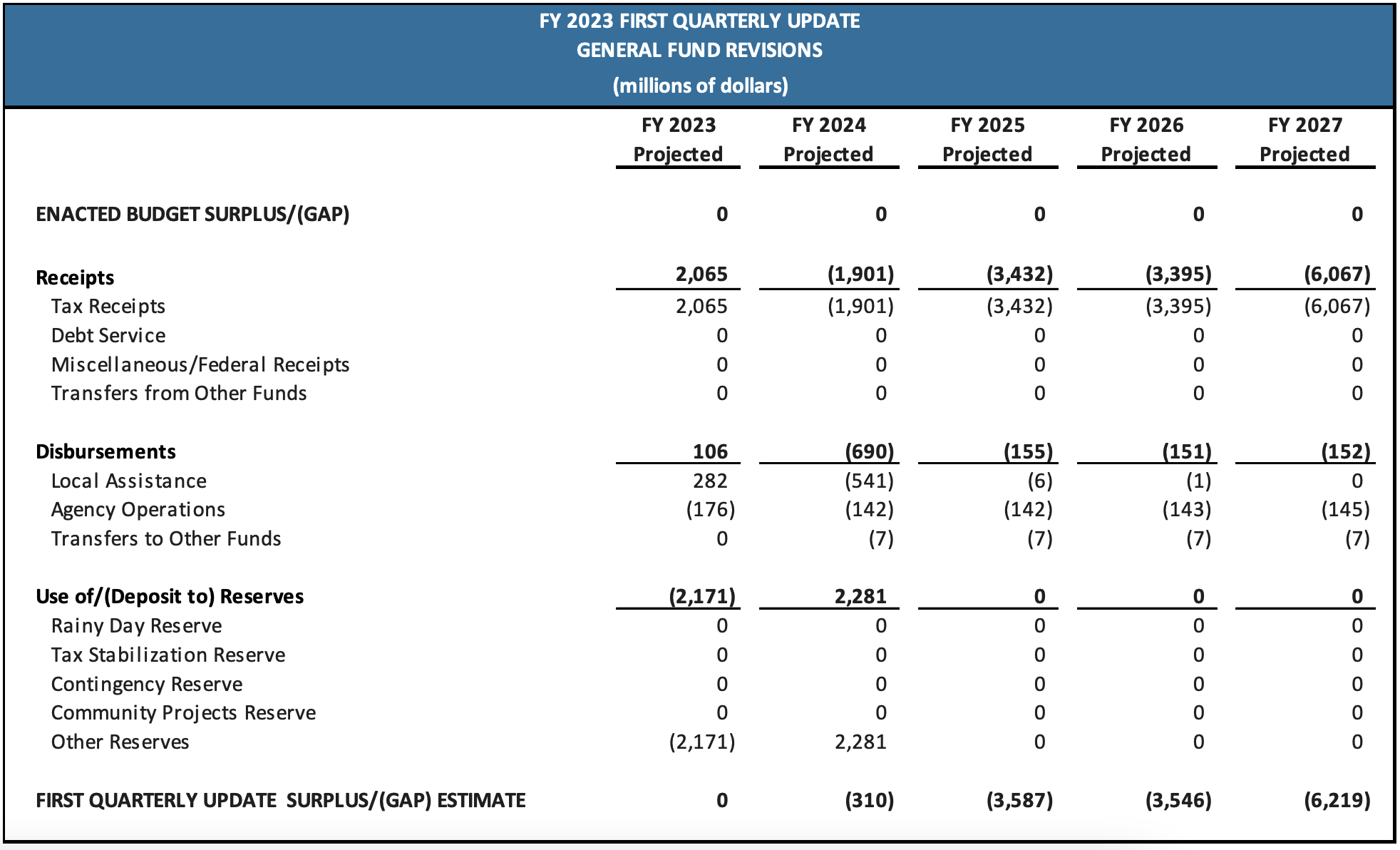 As recently as May, shortly after Albany leaders voted in April to adopt a swollen budget plan, DOB issued an Enacted Budget Financial Plan with a robust forecast. We warned at the time that its projections of multi-billion out-year surpluses and large annual reserve fund deposits were unlikely to come to pass, primarily because they were, “critically reliant on sanguine economic and revenue forecasts.” Still, the reversal in the state’s budgetary fortunes came at remarkable speed.

The nation is currently in a recession, under the common definition of two consecutive quarters of negative GDP growth. The major stock market indexes are down double-digits for the year (despite a modest bounce back last week). Consumer inflation increased 9.1 percent during the year that ended in June, the largest such increase since 1981.

As a result, DOB’s updated economic forecast reduces projected GDP growth for the U.S. from 3 percent to 1.6 percent in 2022 and from 2.4 percent to 1.2 percent in 2023. While the nation as a whole recently recovered from pandemic-related job losses, New York is not expected to do so until 2026, according to the forecast, which scales back anticipated job growth for the state in 2023 from 1.5 percent to 0.8 percent.

State budget revenue is increasingly derived from the highly variable bonus and capital gains income earned by top earners on Wall Street. It was a wellspring of cash that kept the state’s coffers overflowing during the pandemic. But New York’s heavy reliance on this revenue source is a double-edged sword. That’s why my colleague, E.J. McMahon, recently flagged the potential impact of the financial market declines on the budgets of New York State and New York City.

DOB’s update reduces expected finance and insurance sector bonus income by $4.3 billion for FY 2023. Though average wages across the workforce are expected to keep growing due to inflation, lower bonus income and lower employment across the broader workforce is expected to reduce overall wage growth in 2023 from 3.3 percent to 2.7 percent.

Over the longer term, estimates of personal income tax (PIT) payments (which include capital gains) are reined in, starting in FY 24. Fully $22.3 billion less in estimated PIT payments are expected from FY 24 to FY 27. That’s only marginally offset by a $1 billion annual upward revision of PIT withholding payments.

Where the economy and financial markets go from here is unknown. But in retrospect, it seems clear at least that the Governor and the Legislature should have showed more fiscal restraint in April. There’s still time for Hochul to go back and exercise some.

The fiscal implications of several bills adopted by the Legislature but as-yet unsigned by the Governor are not reflected in the DOB update. Foremost among these is the “Green Chips” bill the Legislature adopted just prior to adjournment. It authorizes tax credits for semiconductor manufacturers of half a billion annually, up to $10 billion over twenty years. Hochul is expected to sign it into law. If she does, it will be with full knowledge that it will deepen the deficits DOB now forecasts.