The image on the cover of New York State’s first quarter financial plan update is obviously meant to convey the sense that there’s not only a light visible at the end of the budgetary tunnel, we’re just about to emerge into broad daylight. But the report itself, released late yesterday by Governor Cuomo’s Division of the Budget (DOB), doesn’t “update” much at all, suggesting the state is parked in that tunnel. 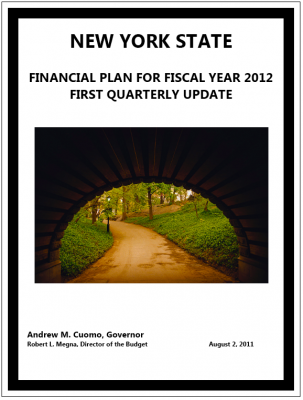 Two weeks ago, the comptroller’s cash report revealed that state tax receipts were $800 million above forecast during the three months ending June 30, and spending was well below projected levels during the period.

The latest DOB financial plan pours cold water on any celebrations these numbers may have sparked. The trends, it says,  “are believed to be timing-related and do not provide a basis for revising the annual estimates of receipts or disbursements at this time.” For example, it notes that state health care spending in the first quarter was nearly $600 below the April projection due to “timing changes of certain Medicaid managed care premium payments ($280 million), the required repayment of Federal overpayments associated with inpatient rate packages ($177 million), and processing delays of public health reimbursement to counties and providers for claims submitted under various programs ($135 million).”

As a result, the financial plan does not change the budget gap projections for the next three years, which range from $2.4 billion for 2012-13 to $4.6 billion for 2014-15. (Keep in mind that, under Cuomo’s revised budgeting practices, these figures no longer reflect highly inflated “current law” baseline assumptions about out-year Medicaid and education expenditures, in particular. So, measured in terms of political degree of difficulty, quite aside from revenue risks, a $2.4 billion at this stage represents bigger challenge than it would have been before this year.)

Interestingly, aside from the usual  caveats about “risks and uncertainties,” the quarterly plan also provides no detailed update of DOB’s economic projections, which in April reflected the consensus expectation of a steady if somewhat slow economic recovery nationally and on the state level.  Since then, the consensus has been adjusted downwards in light of the Eurozone’s economic shakiness, the sinking GDP outlook and the aftermath of the federal debt ceiling showdown in Washington.

“Worries about the global economy rippled through financial markets,” the Wall Street Journal reported today.  Similar worries should be rippling through Albany.