New York State’s tax receipts in November were a whopping $800 million above Governor Cuomo’s projections for the month—further evidence that the current-year budget gap is probably much smaller than Cuomo has been claiming.

Meanwhile, however, private employment in New York continued to recover only slowly in November—failing to increase at all across much of upstate, where employers are about to be hit with an increase in state-mandated minimum wage.

What the numbers say

The latest monthly cash report from state Comptroller Thomas DiNapoli showed November tax receipts coming in at $4.3 billion, 23 percent higher than the $3.5 billion projected in the Mid-Year Update to the Financial Plan, issued Oct. 30 by Cuomo’s Division of the Budget (DOB).

Continuing a trend from September, the receipts tally was boosted mainly by personal income taxes (PIT), the state’s largest revenue source. Albany’s November PIT haul was a net $2.57 billion—$693 million, or 37 percent, above the amount projected in the mid-year plan, and slightly higher than the amount collected during the same month in 2019. Sales and consumption taxes were also above projections at $1.33 billion, which was about $271 million (26 percent) above the mid-year forecast, although this categorically was very slightly lower than the November 2019 level of $1.41 billion.

Through the first eight months of the fiscal year, tax collections are $2.95 billion, or 5.8 percent, below the amount collected at the same point in fiscal 2020—which was the glass-half-empty negative spin that DiNapoli chose to emphasize in his news release on the cash report.

However, on the positive side, fiscal year-to-date tax collections are now running $2.3 billion ahead of Cuomo’s Aug. 13 First Quarter projections—and are still on track to hit DiNapoli’s prediction that they will end up a net $3.8 billion higher than DOB’s projection for the fiscal year ending March 31, which would nearly cut in half the $8 billion budget gap projected by Cuomo in his Mid-Year Update (although the governor in public continues to describe the shortfall as “$15 billion”). If correct, DiNapoli’s forecast means next year’s state budget gap is not $16.7 billion as most recently estimated by DOB, but no worse than $12.6 billion (and probably less).

Total taxes collected through November were $375 million above the adjusted year-to-date cash flow projections in the Mid-Year Update—in which, despite the upbeat trend of recent months, DOB significantly reduced the monthly tax receipts outlook for December through March. These customarily have been among the most bountiful months for the state treasury, reflecting year-end bonuses for many taxpayers and catch-up estimated payments by high earners in advance of the April filing deadline.

However, there was a slight regional disparity in the numbers. Total employment in upstate metro areas—which were not hit as hard by COVID-19, and suffered a slightly smaller peak job loss—was 10.3 percent below the 2019 level. This was essentially unchanged from the October difference of 10.2 percent. In the rest of the state, mainly New York City and downstate suburbs, the employment decline came to 13.3 percent, which was down a half percentage point from October.

As shown below, the net year-to-year decline in private employment in upstate metros was 183,700 jobs, slightly worse than the October net decline of 182,800. In the rest of the state, the net decline was 754,000 jobs, an improvement over the previous month’s 776,400. 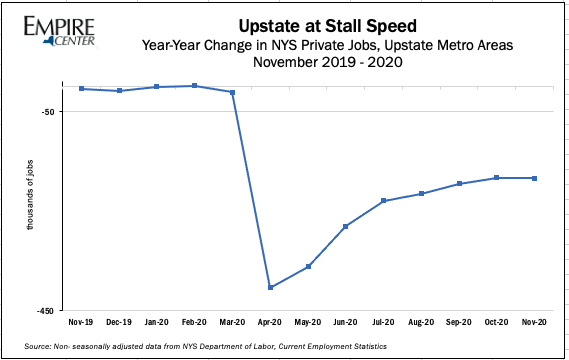 Earlier this week, the Labor Department said it would move ahead with a scheduled major increase in the minimum wage in areas outside New York City, where it has reached $15. On Dec., 31, the wage will rise from $13 to $14 in Westchester County and Long Island, and from $11.80 to 12.50 in the rest of the state including all of upstate.

The Cuomo administration could have postponed the increase but decided to plunge ahead with the higher wage mandate based on a dubious “analysis” by DOB.

DOB’s analysis acknowledged the obvious: the state’s economic recovery from pandemic restrictions remains “fragile” and “COVID-19 has dramatically changed the economic landscape, casting doubt on whether the capacity to absorb minimum wage increases without adverse impact can continue over the near-term.” Nonetheless, the report also asserted that a wage hike was justified on the grounds that “labor market recoveries in Long Island, Westchester, and the remainder of the Upstate are proceeding apace.”

As the latest numbers show, the “pace” of the labor market recovery upstate actually is more like a standstill, and downstate it is very, very slow—hardly grounds for optimism that employers, especially small firms in the struggling service sector, will simply shrug off increases of 5.9 percent (upstate) to 7.7 percent (downstate) in base wages for unskilled labor.

The statewide unemployment rate for November was estimated at 8.4 percent, down from 9.4 percent in October but still well above the national jobless rate of 6.7 percent. As shown below, the rate was lower outside New York City—but, in general, the drop in New York’s employment rate in recent months has reflected fewer people looking for work, rather than an increase in resident employment. 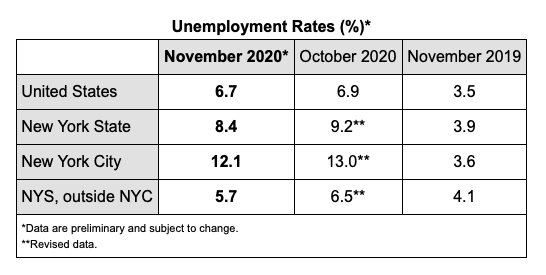