Taxing opioids once looked like the next big revenue opportunity for states. But while taxes on sports betting, marijuana, and vaping products have become common, only New York has followed through with an opioid tax, which partially backfired.

Two of the big forces behind the trend: First, most states are embracing a big, one-time payout through legal settlements with opioid manufacturers and distributors. Second, state tax and health care professionals have criticized levying what appears to be a “sin tax” on a medicine that fulfills a critical need for those who suffer from chronic pain.

“A tax on opioids isn’t like a standard sin tax,” Nicole Kaeding, vice president of Policy Promotion at the National Taxpayers Union Foundation said. “Excise taxes on substances like alcohol and cigarettes are meant to dissuade use, but many people need opioids, and obviously not everybody taking them is abusing them.”

And ultimately, the tax would be paid by patients, not by the drug companies, said Richard Auxier, a research associate at the Urban-Brookings Tax Policy Center.

“There’s this effort to try and get ‘Big Pharma companies’ to pay an additional excise tax on the production of opioids, but if pursued the tax would surely be pushed on the consumer, and that would be problematic,” Auxier said. “This isn’t like going to 7/11 to get a pack of cigarettes; this is medicine.”

Legal settlements totaling into the billions have surfaced in past weeks—$260 million in Ohio, $572 in Oklahoma, and a $3 billion Purdue Pharma, Inc. settlement spanning across 23 states among them.

Kaeding compared the wave of lawsuits to the Tobacco Master Settlement Agreement (MSA) of the late 1990s. In the MSA, attorneys general of 46 states won more than $200 billion in damages from the four largest tobacco companies, to be paid over the first 25 years of the agreement.

Auxier of the Tax Policy Center said he doesn’t expect more states to go after a similar law in the upcoming year. “If states were hesitant to do this in 2018, then they’ll still be hesitant in 2020,” he said.

Other states have considered an opioid tax as recent as this year—including Massachusetts, Maine, and Minnesota—but none have followed through.

Lawmakers from these state have not responded for a request for comment on specific factors contributing to the downfall of the proposed taxes.

The Problem in New York 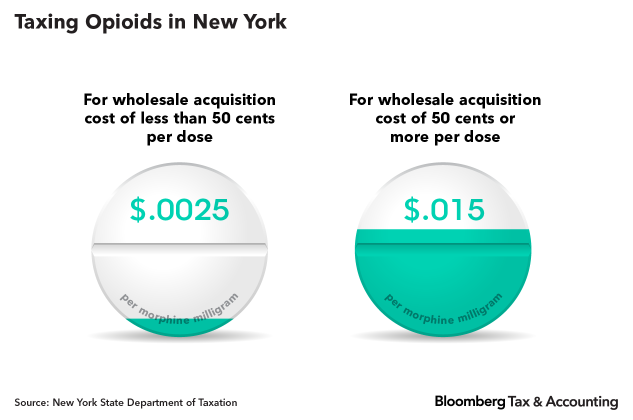 New York on July 1 became the first state to enact an excise tax targeting opioids. The New York experiment, however, has triggered some unexpected consequences.

“It is very unusual to tax medicine in this manner; a lot of people using opioids are using them legitimately” said Bill Hammond, director of health policy at The Empire Center, a conservative-leaning think tank in Albany, N.Y. “To go after a specific class of drug like this, I don’t think anything like this has ever been done in New York.”

“I think that in advancing this bill, the state saw Big Pharma as a ‘boogie man’ that they could try and tax without repercussions, but it clearly hasn’t played out that way,” Hammond said.

According to Hammond, New York has set a targeted goal of $100 million in opioid excise tax revenue per year.

Freeman Klopott, spokesperson for the New York State Division of the Budget, argued that the money generated from the excise tax would benefit patients.

“New York State is spending over $1 billion to deal with the aftermath of the opioid industry’s unscrupulous distribution of drugs across the country and the death and misery that has resulted in every community,” Klopott said in an email. “The State will work to ensure patients continue to have access to the medicine they need while this new tax is projected to generate $100 million to help offset these incredible costs.”

However, the new tax has triggered a business backlash. Some opioid manufacturers have already pulled out of the state, affecting those with opioid prescriptions and hurting revenue.

According to Kaeding, three manufacturers—Epic Pharma, AvKARE and Lupin Pharmaceuticals—discontinued opioid shipments to the Empire State soon after the law was effective. Two other manufacturers, Mallinckrodt Pharmaceuticals and Upsher-Smith Laboratories, are in talks over cutting ties with the state.

The state had passed a similar law in 2018, but that was deemed unconstitutional by a federal judge who said that it violated the Commerce Clause in the U.S. Constitution.