An updated searchable online database of earnings for 384,186 employees of NewYork State school districts outside New York City was posted today at www.SeeThroughNY.net, the transparency website sponsored by the Empire Center for Public Policy.

Now complete through the 2012-13 school year, the database includes pay for teachers, administrators and others, as reported for the 12 month-period ending June 30, 2013 to the New York State Teachers Retirement System (NYSTRS members). It also includes pay for other school employees, such as custodians, aides and bus drivers, for the 12 month-period ending March 31, 2013, as reported to the New York State and Local Retirement System (NYSLRS members).

Since 2008, coinciding with the start of the Great Recession, average pay for NYSTRS members has risen 11 percent statewide, the newly posted data indicate. Including part-time substitutes, NYSTRS members in Long Island schools had the highest average 2012-13 pay at $76,758, while those in the Mohawk Valley region had the lowest average pay at $37,591.

For the third consecutive year, the Scarsdale School District in Westchester county had the highest average educator pay at $120,786. Scarsdale was followed by Jericho (Nassau), Yonkers (Westchester), and Bronxville (Westchester). A list of the 50 highest paid districts is available here. However, the averages in many cases are depressed by the inclusion on the list of numerous substitute teachers and part-timers whose reported salaries came to only a few thousand dollars per year. 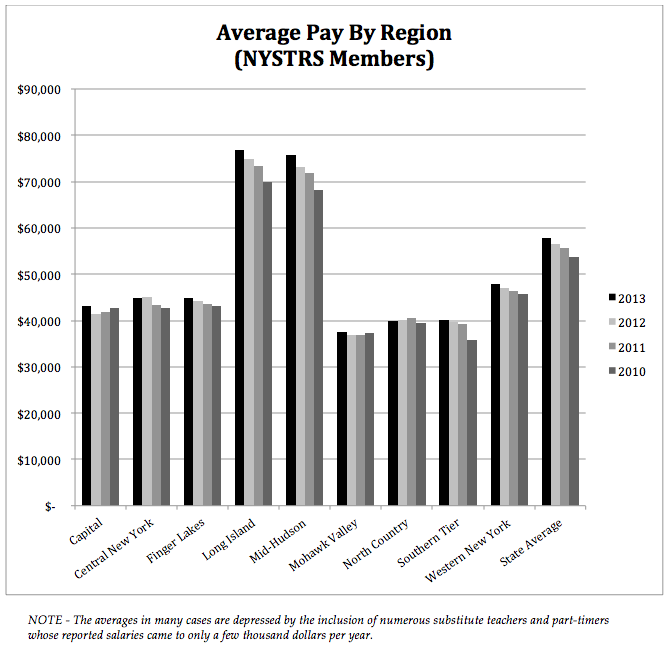 Empire Center Previews State of the State: People are Leaving