The main thing wrong with Governor Cuomo’s Medicaid budget is that it barely exists.

His executive budget proposes to reduce funding for the state’s biggest and most important program by 10 percent, or $2.5 billion, but omits any plan for making that happen. Instead, the governor is delegating details to a panel of industry insiders who haven’t yet been named and don’t have a clear deadline.

The state Constitution says the governor is supposed to start the budget process by presenting a “complete plan of expenditures proposed to be made.” The Medicaid portions of the executive budget are no one’s idea of complete.

These moves continue the administration’s recent pattern of withholding information and delaying action, which is what threw Medicaid’s budget so badly out of balance in the first place.

Rather than itemizing cost reductions, the executive proposal includes a crude placeholder: a clause in the Medicaid appropriation that effectively compels the Legislature to approve the full $2.5 billion in savings or trigger across-the-board cuts.

The one concrete policy change included in the plan – requiring New York City and the counties to shoulder any Medicaid spending increases beyond 3 percent a year – would not be a viable way to control spiraling costs, but to shift them onto local taxpayers.

It’s also troubling to hear the governor suggest that his Medicaid Redesign Team will consider “additional industry revenue” to balance the Medicaid budget. This raises concern that the state will resort to hiking its already burdensome taxes on health insurance – making coverage even less affordable for consumers and employers.

Unlike most deficits of the past, this Medicaid imbalance is driven not by a shortage of revenue, but by an excess of spending – which has been growing at two or three times the rate of medical inflation even as overall enrollment has stayed flat.

The state has not only failed to keep spending in check but pushed it up with policy choices tailored to benefit the health-care industry rather than Medicaid recipients or taxpayers.

Medicaid pays for the health care of millions of New Yorkers, including its most vulnerable citizens. It’s incumbent on state leaders to manage it properly. That begins with writing an honest, sustainable budget. In that spirit, it’s important to be clear about the true causes of the current crisis.

It’s often said, for example, that Medicaid’s spending increase reflects rising enrollment or declining federal aid. To the contrary, the post-Affordable Care Act sign-up surge ended in fiscal year 2016, and overall enrollment has been virtually flat since then. Federal aid is up by $12 billion or 31 percent over the past four years and remains higher than ever.

The governor has pointed blame at local governments for allegedly authorizing excessive benefits because their share of costs has been frozen by the state. Local officials play a role in screening applicants for long-term care, but their ability to control costs is minimal compared to that of Albany, which, after all, sets the rules the localities are implementing.

Another misconception is that the deficit was caused by the “global cap” on the Medicaid budget, which is seen as arbitrarily tight. This reality is just the opposite. The cap originally limited the growth of state Medicaid spending to the 10-year rolling average of the medical inflation rate. It worked well at first, especially during the governor’s first term. Over time, it has been weakened to the point that it allows the budget to increase far faster than inflation – and actual spending has risen even faster still.

In 2019, for example, the theoretical global cap was 3 percent, Department of Health Medicaid spending was budgeted to increase by 7 percent, and actual DOH Medicaid spending spiked by 15 percent – five times the medical inflation rate.

What clearly did contribute to the current crisis was a failure to enforce the cap. The administration did not flag overspending in monthly reports, as the law provides. Nor did it promptly take action to reduce expenses, as the law empowers it to do when necessary to stay on budget. Instead, it resorted in March 2019 to delaying a full month’s worth of payments to health plans and providers, in the amount of $1.7 billion, from one fiscal year to another.

That single maneuver – which was not disclosed to the Legislature or the public until after the fact – directly caused the $4 billion deficit in the current fiscal year.[1]

Among the major factors pushing up Medicaid costs are the minimum-wage hike of 2016, ongoing subsidies for money-losing hospitals and rate increases for hospitals and nursing homes that were awarded in late 2018. It should be noted that these policy choices were not about covering more people or adding benefits. Rather, they worked to the financial benefit of health-care providers and their employees.

The amount earmarked to defray providers’ minimum-wage costs – at $2 billion a year and rising, half of it state funds – is far higher than originally projected. The administration has not clearly explained how it calculates that amount. The Legislature should seek more details to assure that the expenditure is justified.

Another big cost driver is an unexpected surge in long-term care. Enrollment in managed long-term care plans has been increasing at double-digit rates since early 2016 and shows no sign of slowing down. The bulk of these enrollees are elderly and disabled people receiving home-based care, including the nonmedical services (such as cooking, bathing, dressing and housekeeping) known as “personal assistance.” 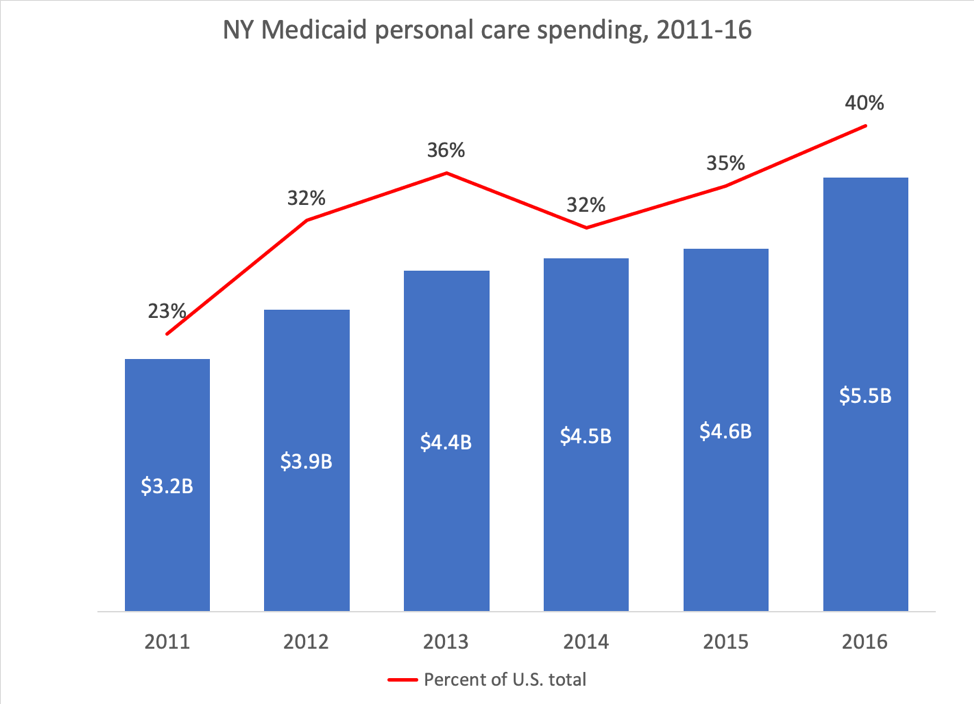 When the governor took office in 2011, New York’s spending on this optional Medicaid benefit was already extraordinarily high – accounting for 23 percent of the nationwide total (see chart). By 2016, that ratio had soared to 40 percent, and has undoubtedly climbed substantially since then.

This trend cannot be explained by demographics alone. From 2016 to 2018, New York’s over-75 population grew by 4 percent. During that same period, Medicaid managed long-term care enrollment jumped 31 percent, or almost eight times as fast.

Especially explosive has been the growth of the Consumer Directed Personal Assistance Program, in which Medicaid recipients hire and train their own caregivers, who can be family members and friends. This approach has many advantages, but it is also inherently vulnerable to fraud and abuse.

The share of New York residents receiving Medicaid, at 33 percent, is 20 points higher than the poverty rate of 13 percent, which is the widest disparity of any state. At least some of this is the result of mistaken or fraudulent enrollment, as multiple audits have confirmed.

The state has made it too easy for middle- or high-income New Yorkers to qualify for Medicaid long-term care coverage – particularly home-based care – by either transferring assets or putting them in trust. It has become the long-term care insurer of first resort instead of the last resort it was meant to be.

In addition to reimbursing providers for care, the state also makes heavy use of Medicaid funds for targeted grants, through the Disproportionate Share Hospital program and other pools. Much of this money is used to prop open institutions that are underutilized and unsustainable. The Indigent Care Pool, which is supposed to compensate hospitals for charity care, is distributed through a dysfunctional formula that overpays some wealthy institutions while short-changing many of the true safety-net providers.[2]

Finding $2.5 billion in savings between now and March 31 is no small challenge, but it’s worth remembering that this is not an exercise in cutting costs from year to year but slowing growth. Even after reductions of that magnitude, the program’s spending in fiscal 2021 would still be $2 billion or 8 percent higher than the amount you approved 10 months ago in the fiscal 2020 budget.

Here are recommendations for closing the gap:

Tighten enrollment procedures. Multiple state and federal audits have shown that New York’s Medicaid rolls include substantial numbers of people who don’t belong there – either because they don’t meet income guidelines, already have other insurance or, in some cases, are deceased. A recent federal audit found that 5 percent of enrollees sampled were clearly ineligible and another 11 percent were potentially ineligible. It extrapolated excess spending for the first group at half a billion dollars over six months.

Tighten eligibility standards. A significant share of long-term care enrollees are middle- or high-income people who have gamed the system by transferring assets or placing them in trust – and they are receiving some of the costliest benefits Medicaid covers. Medicaid is meant to provide a safety-net health plan for the poor, not estate protection for the well off.

Rescind the 2018 rate hike. In October 2018, amid signs of a burgeoning deficit, the Cuomo administration ordered across-the-board rate hikes of 2 percent for hospitals and 1.5 percent for nursing homes. Last February, the governor briefly proposed canceling that increase to save $222 million, a modest step that’s even more warranted now.

Overhaul personal care. New York’s per capita spending on this optional benefit is six times the average for the 33 states who offer it. If New York could match the spending rate of the second-highest state, Massachusetts, its costs for this program area would drop by 40 percent, saving on the order of $1 billion.

Reduce provider subsidies. In February, the Cuomo administration estimated that a modest reform to the Indigent Care Pool – capping grants for a subset of large, financially strong hospitals – would save a quarter-billion dollars, half of which would accrue to the state. Similar reforms to other subsidies could also achieve substantial savings.

Restore accountability and transparency. The Cuomo administration has acknowledged manipulating the timing of Medicaid payments – a tactic that concealed the true level of spending – dating back several years. The Legislature should demand a full accounting of these transactions and act to prevent such deferrals in the future. It should also insist that the Department of Health resume posting monthly updates on Medicaid spending and enrollment.

Preserve the local freeze. The share of Medicaid already paid by New York City and the counties – about 10 percent of total expenses – is already the highest in the country. This puts an unfair burden on localities with higher concentrations of poverty and weaker tax bases, and if anything should be further reduced. Since local jurisdictions have limited control over Medicaid, few if any would be able to keep growth under 3 percent, as the governor’s proposal would require, resulting in a large and unwarranted cost-shift from Albany to local taxpayers.

Reject higher taxes. New York already imposes $5 billion in taxes on health insurance, making it the state’s third largest source of revenue. The “covered lives assessment” adds $573 to the cost of a family policy in New York City, and a separate “payor surcharge” adds almost 10 percent to every hospital and clinic bill – a rate far steeper than the standard sales tax. New York has the highest premiums in the lower 48 states. Albany should be working to eliminate those levies, not hiking them and making coverage even less affordable than it already is.

[1] For more details on how the global cap has functioned, for better and worse, see the Empire Center’s October 2019 report, “Busting the cap: Why New York is losing control of its Medicaid spending again.”