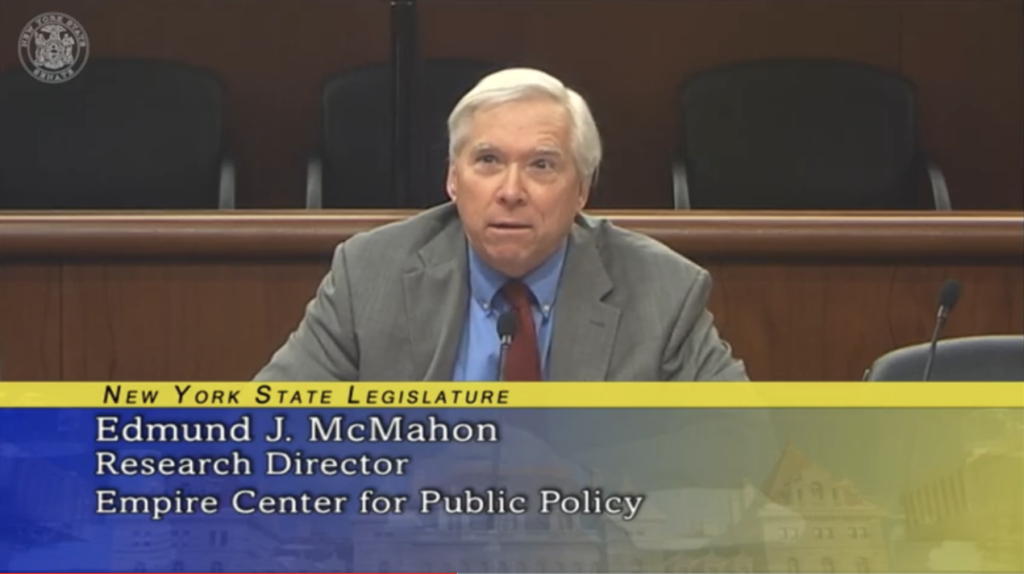 Among the very few tax law changes proposed in the FY 2021 Executive Budget are two on which I will focus briefly today—a proposed expansion of the Empire State Child Credit, and changes to the state Film Tax Credit. I will then turn to some of the questions raised by current legislative proposals for major tax increases, which the governor has publicly rejected but which obviously enjoy some support in both the Senate and Assembly majorities.

On the first item, the governor’s proposal to allow families with incomes under $50,000 to claim the credit for children under four is laudable – as far as it goes. But it could and should go much further. To repeat a proposal I made here in the past, you should consider fully recoupling to the federal child credit, which has now been doubled, and allow the maximum state credit to rise from $333 to up to $666 for children aged 5 to 17.  And you should finance the $500 million cost of this expansion by repealing the sales tax exemption for clothing purchases under $110.

While the sales tax exemption was touted as “easing the burden on working families,” it is a crude and inefficient tool for accomplishing that goal. It doesn’t just shave a few dollars off the cost of a poor child’s winter coat—it also gives a tax-free pass to everything from $100 Brooks Brothers neckties to overpriced souvenir tee-shirts sold to Times Square tourists. Shifting the sum spent on this broad tax break to the child credit would more directly help working parents. (As for the lost tax break, you’d have to buy $4,000 worth of clothing in $110 tax-free batches to replicate a qualified family’s savings from a $333 increase in the tax credit for a single child.)

In contrast to the child credit expansion, the governor’s proposed “reform” of the Film Tax Credit is not a step in the right direction. The proposal would reduce the credit from 30 to 25 percent of qualified production costs in the metropolitan New York City area, and from 35 to 30 percent upstate, and extend the entire $420 million credit program by one more year, through 2025. There is also some proposed tightening of the definition for TV shows eligible for the credit.

The governor’s bill memo provides no explanation for these changes, but it seems apparent that as New York becomes even more popular as a production site, a longer line of producers is clamoring for this taxpayer subsidy. The budget bill would cut a $420 million pie into slightly smaller pieces so there’s more to go around.

Unfortunately, this so-called “reform” would preserve and extend the most generous program of its type in the country—needlessly subsidizing untold numbers of productions that would be made in New York without it.  This program has now cost us billions. Far from enacting these changes, it’s high time to call a “wrap” on the film credit in its entirety.

Turning now to other proposals on the tax front: as you know, various groups advocating higher spending on education and health care have been calling for a combination of various new taxes and tax increases aimed at “millionaires and billionaires,” including new taxes on stock buybacks, a tax on accumulated wealth, and the so-called pied-a-terre tax on high-priced second homes.

The most relevant proposal—a version of which has been passed as part of the Assembly’s one-house budgets for the past several years—would further increase tax rates on multi-million-dollar earners.

Advocates of such tax increases often find a historical precedent in New York’s own history of higher income tax rates, which peaked at more than 15 percent during the final years of the Rockefeller administration.  However, it’s important to note that those taxes were fully deductible from a higher federal tax rate, which reached as high as 77 percent during the period. When New York’s tax rate reached 15.375 percent in the 1970s, its effective, post-deductibility cost to top-bracket households was only 4.6 percent. A decade later, during the Reagan era, the 1986 federal tax reform very significantly broadened both the federal and state tax base—meaning that each percentage point on the state rate actually raised more in revenue than it had previously. In fact, at least half the savings attributed to tax rate cuts in New York’s 1987 Tax Reform and Reduction Act were necessary merely to prevent an automatic “windfall” tax increase.

The game-changing importance of the SALT cap cannot be over-emphasized. For the highest earners, deductibility effectively vanished with the enactment of the new federal tax law. Prior to 2018, every dollar in added state and local income taxes was effectively discounted by about 40 percent.  Now, however, every added dollar in state income tax costs a full, non-deductible 100 cents.  The net cost of state and local taxes has risen steeply for the highest earners, and so has their incentive to reconsider living, working and investing in New York.

In fact, even before the new federal tax law, the high end of our tax base already had been shrinking in relative terms, like a slowly melting glacier. To repeat a data point I cited in my testimony last year, the resident share of millionaire earners in New York’s PIT base has been getting smaller since 2000, including decreases every year since 2008.[1]

The salient facts are these: between 2008 and 2016, according to state tax data for both years, the number of New York resident taxpayers with incomes above $1 million increased by 28  percent. In the nation as a whole during the same period, the number of federal income taxpayers in the same income brackets increased by 32 percent.[2]

There is a more striking difference when you look at how much income these filers were earning. Between 2008 and 2016, the New York adjusted gross income (NYAGI) of income millionaires living in New York increased by 14 percent, from $146 billion to $166 billion, according to state tax data. During the same period, according to IRS data, the federal adjusted gross income of millionaire earners in all 50 states increased much faster—by 26 percent, from $1.1 trillion to $1.4 trillion.

What explains this discrepancy? One clue can be found by looking at the adjusted gross incomes of the fastest-growing portion of New York’s high-earner tax base—residents of other states who have some New York source income and thus are required to file New York State personal income tax returns as full-year nonresidents.

From 2008 to 2016, New York State’s tax base added more than 15,000 nonresident income millionaire filers, an increase of 53 percent, according to state tax data. Total nonresident gross incomes in this bracket, rose from $125 billion to $222 billion, and their average incomes increased by 16 percent, from $4.3 million to $5 million. How much of that increase consisted of former New York residents who had moved away to escape our tax burden? The data don’t tell us.  But the pattern certainly does not indicate that higher rates don’t matter, or that New York can raise “millionaire taxes” with impunity.

How many of those outbound Manhattanites were motivated by a desire to save money on taxes, rather than seeking warmer weather, or a more relaxed quality of life, or a combination of all of the above? Again, the data don’t answer that question. But they certainly don’t lend support to the claim that taxes don’t matter.

The personal income tax does not represent the only added New York cost factor for higher-income households. New York is now one of only a dozen states that impose a separate estate tax in addition to the federal estate tax. There certainly are grounds for arguing all sides of the debate over whether estate taxes should be raised or lowered on the federal level.

But on the state level, there is little doubt that as long as we impose our own estate tax, we are providing a strong incentive for wealthy households—including owners of businesses in New York—to sell their assets here and move to any one of the 38 states that will not subject them to added tax.

New Yorkers can and will reasonably differ on the appropriate levels and purposes of state spending on a wide variety of programs. But a bottom-line consideration in state tax policy should be sustainability. Tax policies should be designed not just to raise revenue in the short term, but to sustain a revenue base that is stable as possible given the vagaries of the economy. Over the past 45 years, New York has been increasingly dependent on its personal income tax—now fully two-thirds of state tax revenue, up from 50 percent a quarter-century ago—and roughly 40 percent of the income tax is paid by the highest-earning 1 percent of taxpayers. But the incomes of the wealthiest New Yorkers, derived heavily from capital gains, are far more volatile than the paychecks of the middle class. Between 2007 and 2009, we saw a 40 percent decrease in taxable incomes among the highest-earning 1 percent of New York filers. It took five years, and a supposedly temporary 29 percent tax rate hike, before the tax liability of these filers recovered to 2007 levels.

The state’s current fiscal challenge is caused by excess spending, not insufficient taxes. The governor’s projection of PIT receipts—which apparently have recovered from the post-tax reform disruption in the final quarter of fiscal 2019—assumes a steady continuing uptick in revenues across the next four years, despite the continuing phase-in of significant “middle class” income tax cuts through 2025.  But this could prove overly optimistic.

Raising taxes on the highest incomes to raise revenues in the short term will only accelerate the erosion of our tax base in the long run, ultimately undermining funding for the very programs the Legislature wants to protect.