Should New York’s temporary personal income tax hike on high-income households be extended beyond its scheduled expiration at the end of this year?  Former state Assemblyman Richard Brodsky and I took opposite sides on this question in a segment on YNN’s “Capital Tonight” with Liz Benjamin on Friday evening. 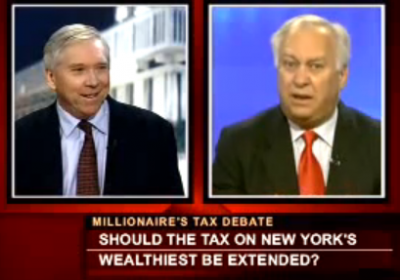 At the risk of paraphrasing someone who is particularly good at making his own case, Brodsky argued that the income tax increase (which he preferred to describe as a tax cut) was justified as an “ethical” matter, to raise needed funds to prevent spending cuts that, in his view, will cause too much harm to too many New Yorkers.

This at least points the debate closer its essence: is it better to knowingly give up (or risk giving up) some economic growth than to reduce spending as Governor Andrew Cuomo proposes?

Other proponents of retaining the tax increase tend to go much further, implying that budgetary policy in New York State went off the rails more than 30 years ago, when three successive governors (two of them Democrats) began steadily reducing the marginal tax rate to its current permanent level of 6.85 percent from its 1977 high of over 15 percent.  Extending the temporary tax increase — which boosted the top rate to 7.85 percent on single filers earning as little $200,000, and to 8.97 percent for those earning over $500,000 —is just a first step towards restoring the Rockefeller-era tax model, in the view of the tax hike’s main advocates.

What they’re not mentioning is in the summed up in this City Journal article. “Thanks to the interplay of federal and state tax rules, Albany’s share of all income taxes paid by New York’s wealthiest residents has actually been rising since the 1970s,” Josh Barro and I wrote.  At the time the article was written, President Obama has just proposed a budget calling for a significant tax increase in upper-income brackets.  That tax hike has been postponed for two years by congressional Republicans, but the impact of future federal tax increases remains a frequently overlooked topic in discussions of proposed tax increases here.