New York’s economic performance over the past decade was mediocre — but its future looks worse,  according to the 5th annual Rich States, Poor States report, just issued by the American Legislative Exchange Council (ALEC).

The report — co-authored by the noted supply-side economist Arthur Laffer;Wall Street Journal editorial board member and economics writer Steve Moore; and Jonathan Williams, director of ALEC’s Center for State Fiscal Reform — ranks states on both a backward-looking index of Economic Performance for 2000-2010, and a forward-looking Economic Outlook index.

New York achieved a middling-to-fair rank of 21st in per-capita income growth and 24th in payroll growth during the past decade, but its overall Economic Performance rank came in at 40th, due to a last-place ranking for domestic migration.  (New York’s loss of population to other states has been documented by the Empire Center here, and here.)

Looking ahead, however, Rich States, Poor States assigned New York a ranking of 50th — dead last — based on 15 equally weighted policy variables, including tax rates and tax burdens, public employees as a share of population, government debt service, and unionization. The index does not include policy developments effective since 2011, so perhaps the enactment of Governor Cuomo’s 2 percent property tax cap (tax limitations being one of those 15 variables) will boost us back to 49th in the report’s sixth edition. Here are the full rankings: 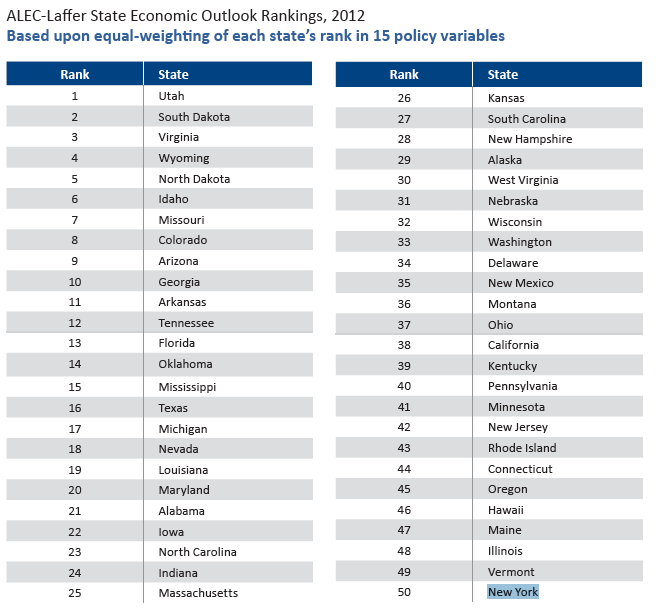