Since the late 1960s, New York’s primary export to the rest of the nation has been people, as reflected in federal data tracking population flows within and between states.

The Empire State has lost a net 1,585,770 residents to the rest of the country since 2010, the largest outflow of any state in both absolute terms and as a percentage of 2010 base population, according to the latest U.S. Census Bureau estimates. This does not include the migratory flows reportedly touched off by the pandemic in the past year; it remains to be seen how many of those moves were temporary and how many were permanent.

In the years leading up to the pandemic, where were outbound New Yorkers headed? What were their average household income levels once they settled in their new home states?

Some answers can be gleaned from the Census Bureau’s primary source of migration data: the Internal Revenue Service (IRS), which can track the movement of tax filers based on the residence listed on their tax forms. The IRS has compiled that information for all states in pairs of years, starting in 2011-12, and the latest data, for 2018-19, were released this week.

Updating our January 2020 report focused on the seven-year period from 2011-18, the Empire Center has mapped 2018-19 interstate movements of New Yorkers on a statewide, regional and county level, as shown below (with average incomes as reported for returns filed in 2019).

For a second consecutive year, the leading destination state for outbound New Yorkers was New Jersey, which attracted 67,131 former Empire State residents. Second most popular was Florida, to which 59,881 New Yorkers moved.

One of the more striking trends in the latest data was the continuing increase in the incomes of New Yorkers moving to Florida. In 2018-19, the average incomes of Florida-bound New York out-migrants rose to $135,000, up from $120,000 the previous year. As shown below, this continues a trend that dates back to the 2011-12, the first year in the current IRS Migration Data series. 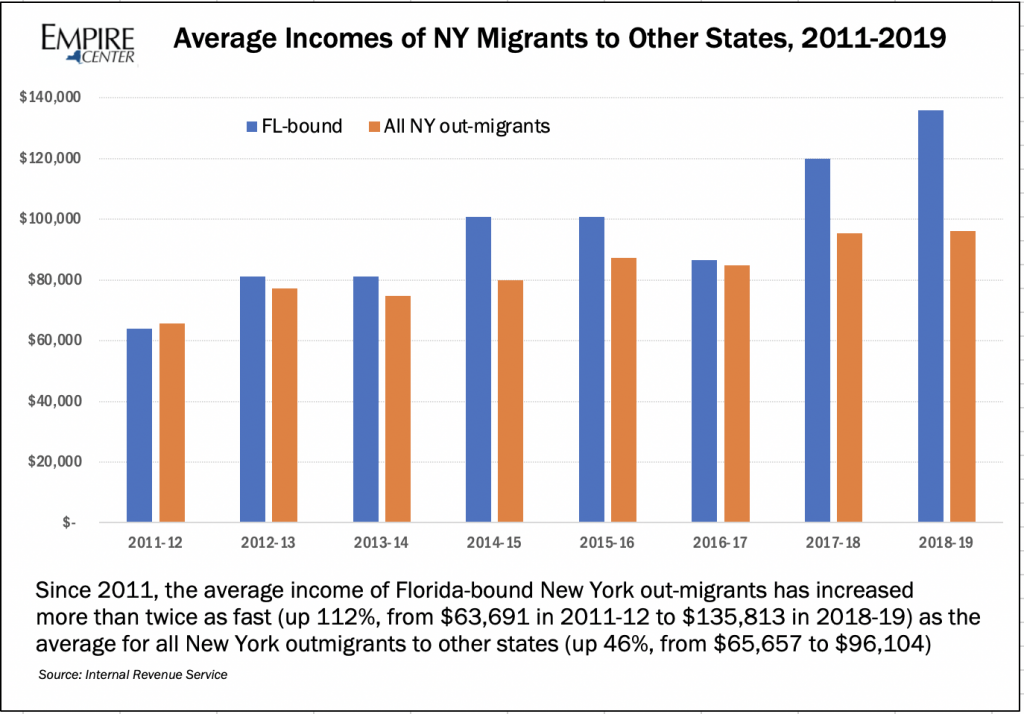 Only two states, Utah ($140,649) and Wyoming ($187,734), drew New Yorkers with higher average incomes—but together accounted for barely 0.2 percent of New York’s net migration outflow. In contrast to New Jersey and Connecticut, whose smaller number of taxpayer migrants to New York State made six-figures incomes from their New York addresses, the average Florida migrant to New York between 2018 and 2019 reported incomes averaging $72,492.

Keeping in mind that the tax returns filed in each year reflect income reported for the previous calendar year—i.e., returns filed in 2018 are based on incomes for 2017—the IRS migration data for New York proceed from the following top-level figures:

The difference between the outflow and inflow is net migration, which in New York’s case was a net outflow of 154,046 people.

The IRS data also shows the number of interstate and intrastate moves on the county level. The total adjusted gross incomes (before deductions) for all taxpayers are reported for both years; in the data shown in our map, the average incomes are for 2019, the year following the move.

The Census Bureau’s estimate of net domestic out-migration from New York State for 2018-19 was larger, at 183,857. The number differs because the Census Bureau estimate covers a different period (the 12 months ending July 1) and because it uses different methods that take account of other factors not caught by the IRS return data, such as cases in which spouses file a joint return in one year and two single returns in another, and in which people claimed as dependents in one year and as non-dependent single filers in another.