The Internet has made it easier than ever for government to share current information with the general public. Yet, 25 years after the invention of the World Wide Web, relatively few New York local governments have effectively tapped the potential of the most pervasive and democratic mass communications medium ever invented.

Most of the 500 local government and school district websites we reviewed between July and September of 2014 need major improvements before they will be providing citizens with all the public information to which they are entitled. Fortunately, as highlighted in this report, there are some good examples to follow.

The Empire Center ranked websites in 10 informational categories, assigning point totals based on the availability of basic information and the ease of navigation.1 Those point totals were converted into letter grades. Everything above F is considered passing. Of the 500 websites ranked, 426 failed to receive even a minimum passing grade of D (see Appendix A for the scoring rubric).

As shown in Figure 2 (below), the majority of local governments could muster a passing score in only four categories; one of which, the posting of public meeting notices, is required by state law.2 Dozens of localities effectively violate the law by failing to “conspicuously” post meeting notices on their websites.

At the other extreme, just five local websites achieved a passing grade for posting information on contracts, including deals collectively bargained with employee unions.

Only 28 percent of local government websites received a passing grade for ease of navigation—i.e., the process of moving around and finding information on a site. 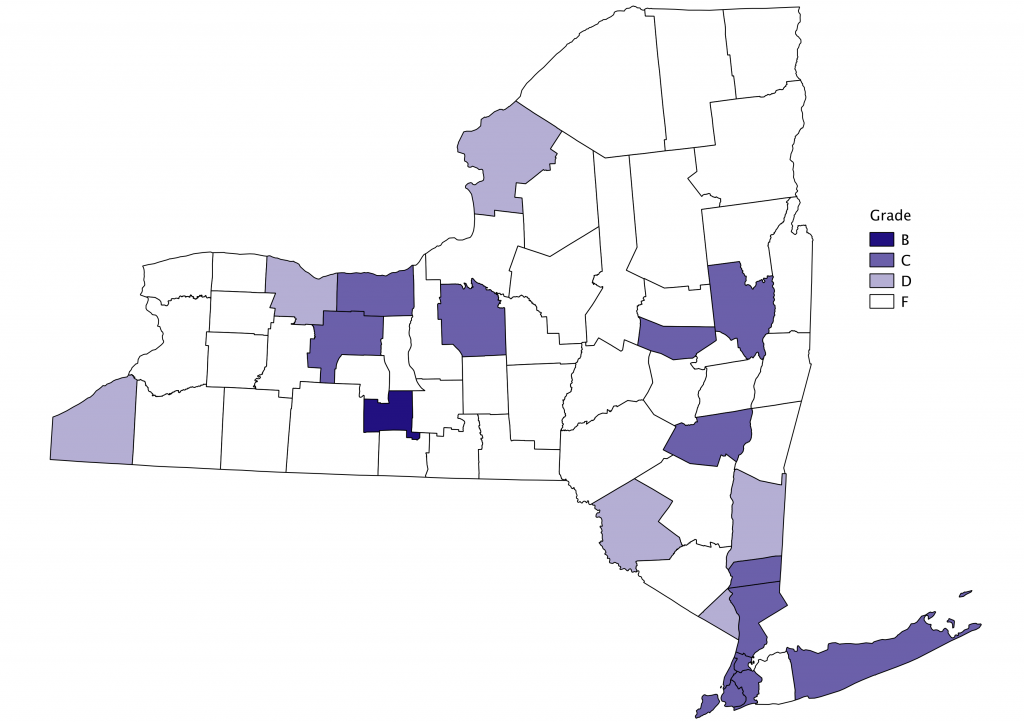 Some F-graded websites were worse than others.

Two villages—Ballston Spa in the Capital Region and New Square in the Mid-Hudson region—were assigned scores of zero because they did not have websites at all during the review period. 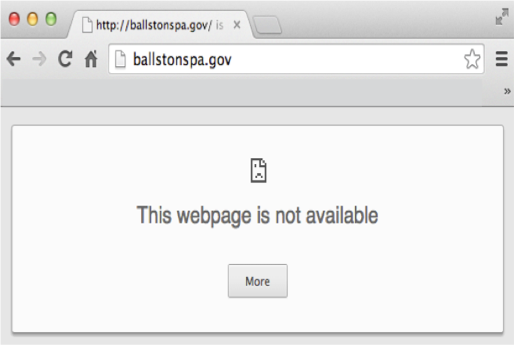 A few other websites were not much better.

For example, the village of Colonie posts only the most basic contact information online, earning just 15 out of a possible 146 points in our rating system. The city of Corning provides visitors to its website with no information on budgets, taxes, contacts, the schedule of public meetings, or municipal services. Essex County posts some information on government contacts and scored a decent 12 out of 16 points for online public meeting disclosure—but offers practically no other useful information on its website.

The most common shortcoming among all websites was a lack of financial information, including budgets, taxes and fees, and expenditures.

The highest ratings of the websites we reviewed belonged to: the Southern Tier’s Schuyler County, New York City, the town of Wilton in the Capital Region, the town of Penfield in the Finger Lakes and the Clarkstown Central School District in the Mid-Hudson valley.

Standout features of the Schuyler County site include a robust document center that includes over 20 years of county budgets and 10 years of audited financial statements. The site also includes contact information for county officials and key employees, clear access to and contact information for Freedom of Information Law requests, meeting agendas and minutes, and an e-services section.

Most notable, however, is the intuitive and thorough web page sidebar (see Figure 4), which includes direct links and menu options to the most important information for taxpayers. The sidebar shows up on every page of the web site, providing consistent and easy access.

New York City’s website provides an unusually rich array of budget, audit, contract and expenditure data. Nonetheless, despite its massive technological and financial advantages, the city‘s grade was undermined by its failure to post and provide easy access to contact information, public meeting notices and other basic public information. With 125 points, New York City earned a B on the Empire Center’s SeeThrough Government ratings. 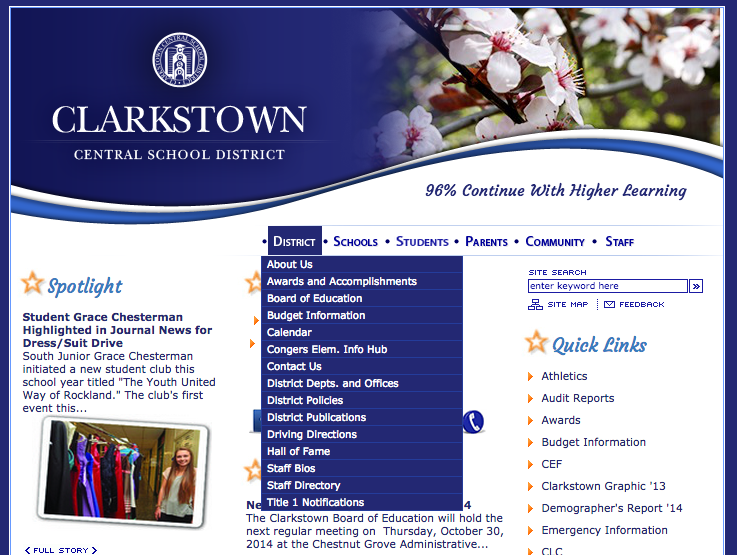 The towns of Wilton and Penfield also scored well, earning points for easy-to-navigate websites that have most of the information a taxpayer would need to make informed opinions about the town’s financial performance and information making it possible to know who their local officials are and how to contact them. Wilton and Penfield both earned a B on the ranking.

The Clarkstown School District earned a high overall grade for ease of navigation. A ‘quick links’ bar on the homepage and multiple intuitive drop-down menus (as shown below) help set this web page apart from others that scored lower in the statewide rankings. Clarkstown earned a B on the rankings with 120 points.

While many local governments did well on the rankings, none ranked well enough to earn an A.

Local government officials regularly make decisions that will have ramifications long after they’ve left office. Municipalities can incur bonded debts lasting decades, and under New York’s Triborough law, taxpayers can be on the hook for contractual employee pay increases (called step increases) in perpetuity, even for employees who haven’t yet been hired.[3] Taxpayers have a right to know the full details of these decisions and their ramifications both before and after they’ve been voted on.

In a 2008 report, “Lifting the Shroud of Secrecy,” [4] the Empire Center documented numerous instances in which the public was kept in the dark about costly labor agreements until it was too late for taxpayers to contact their elected officials.

As that report highlighted, a proper vetting of contracts by the public can even prevent costly mistakes: in a 2008 incident in Johnson City, village trustees secretly negotiated and approved a contract that they thought would give firefighters a generous 33 percent raise. In actuality, they were putting taxpayers on the hook for a 41 percent pay increase, and without any public vetting of the contract, the agreement had already been enacted before the taxpayers knew anything of it.

Unfortunately, the vast majority of local governments and school districts fail to post any information about their union contracts online—before, during or after the deals are negotiated and ratified. Since employee compensation makes up the largest category of local government and school expenditures, the online posting of full contract documents and summaries of contract provisions should be routine on all local websites.

Except for a small—but notable—group of outliers, local governments and school districts are not providing clear or comprehensive or even the most basic information on their websites. What could and should be useful, powerful tools for taxpayers are very much underutilized. 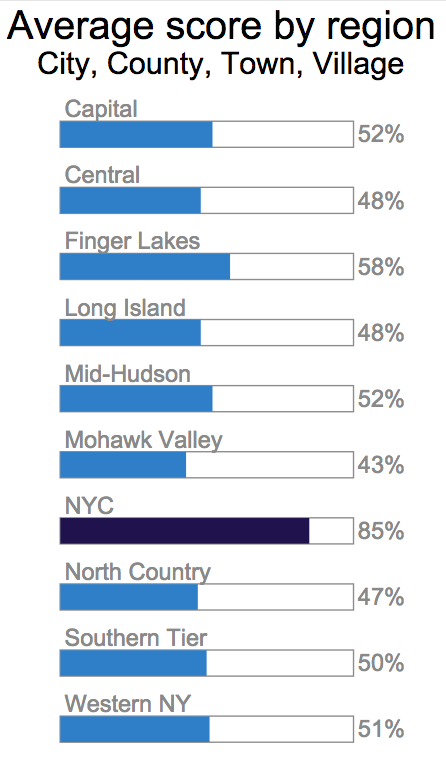 Earning a passing score on the 10-point transparency checklist is not an unreachable goal, even for those entities that failed on the first go round. A website would earn a nearly passing 62 percent by simply posting the documents as outlined in the checklist.

The Empire Center undertook this project not to place blame on any individual local government, rather to highlight the need for advancement in how and when data and information is presented on websites. With no real guidance for what makes a good website, the SeeThrough Government Rankings should provide a basis and a benchmark by which local governments can see how websites stack up from one municipality to the next.

By implementing changes based on the results of this assessment—most, if not all of which can be achieved at little or no cost—local governments of all sizes can greatly increase the usefulness of their own websites and better connect taxpayers to the range of information to which they are entitled.

View the results, organized by municipal type through the links below:

The Empire Center evaluated the websites of all of New York’s 62 cities, the 57 counties outside of New York City and the state’s most populous 103 towns, 98 villages, and 180 school districts using the criteria on the following pages. This approach was adapted from one developed by the Illinois Policy Institute, in consultation with national transparency advocacy groups, for its 10-Point Transparency Checklist.

Websites were reviewed between July and September of 2014. Initial scores and grades were shared with the governing head and information access officer of each entity providing email address on their websites. These officials were given seven days to respond with comments or objections. A small number of revisions were made to reflect some of those comments.

To evaluate each website, the Center started from the government entity’s homepage and continued on to all pages linked from the homepage. Points were subtracted when basic information was not available without using a search function, or required several clicks to reach.

Letter grades were given using the scales below.

View the scoring rubrics through the links below: