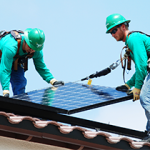 For a second consecutive year, the state Public Service Commission (PSC) has deeply slashed the amount of renewable energy that utility companies are forced to buy under Governor Andrew Cuomo’s Clean Energy Standard (CES). The move casts further doubt on the governor’s goal of having renewables supply 50 percent of the state’s electricity by 2030—while reinforcing the CES program’s status as primarily a bailout for money-losing upstate nuclear plants.

The commission quietly voted Friday to approve the CES “Phase 2 Implementation Plan,” which reduces from 1.1 percent to 0.15 percent the share of electricity that utilities and large-scale electricity users—together known as “load-serving entities”—must obtain from renewables during 2018. Last fall, the commission made a similar reduction to the 2017 requirements, cutting it from 0.6 percent to a minuscule 0.035 percent.

The cuts were necessary because the commission used overblown estimates of what renewable energy sources would be available during its rushed implementation of the standard—as noted in the Empire Center’s October 2016 “Green Overload” report. The standard, after all, was written explicitly to prohibit renewables, such as Canadian hydropower, that might compete with the solar panels and wind turbines envisioned for (but not yet installed in) upstate New York.

The PSC is once again assuming that renewable generation will jump enough in the future to meet Cuomo’s goal. However, the growth from the current level of nearly 24 percent to 50 percent must now be compressed into 12 years instead of 14. And while the hike from 0.035 percent to 0.15 percent may appear small, it indicates the PSC is counting on a more than four-fold increase in the amount of renewables eligible for CES subsidies in the year ahead.

The CES was originally a product of Governor Cuomo’s “50-by-30” efforts. However, the program was transformed midstream into a bailout for Exelon Corporation, the owner of three money-losing nuclear power plants. Under the standard, Exelon will receive $483 million during the first full year of subsidies which began April 1, 2017, and billions more over the next several years. The money comes from ratepayers paying a higher price for electricity, as load-serving entities must purchase CES credits, the proceeds of which are distributed to renewable generators—and to Exelon.

The repeated cuts to the renewable requirements mean that by the end of 2018, based on 2017 credit prices, the Clean Energy Standard will have cost ratepayers $851 million—of which $845 million, or 99.3 percent, will have been turned over to Exelon, leaving the program on pace to become one of, if not the biggest corporate subsidies in state history.