Economists at the Federal Reserve Bank of New York have issued an analysis suggesting that New York’s minimum wage increases from 2013 to 2018 had little impact on employment in counties bordering Pennsylvania.

The Fed’s economists compared employment in two low-wage sectors in the 19 contiguous border counties of New York and Pennsylvania—implicitly assuming that the counties as a group must be comparable because they are next to one another.

But a slightly closer look at the Fed’s numbers reveals a couple of basic flaws with this approach:

Excluding Orange, Sullivan and Tioga counties from the comparison, 2013-2018 job growth in the two sectors studied by the Fed turns out to have been lower on the New York side than on the Pennsylvania side. To be sure, this doesn’t necessarily prove a negative effect from the minimum wage increase—but it also undermines the claim that the minimum wage had no impact on jobs.

As illustrated by the following map at their (studiously non-tendentious and consistently informative) blog, Fed regional economists Jason Bram, Fatih Karahan and Brendan Moore compared employment and average wages in two sectors assumed to have been most affected by the minimum wage—leisure and hospitality, and retail trade—for all 19 of the contiguous New York and Pennsylvania counties.

We use minimum-wage policy differences along the New York-Pennsylvania border to identify the effect of New York’s minimum-wage increases. This “border county” strategy relies on the idea that contiguous counties share a lot of features that are important determinants of wages and employment, but differ in terms of wage policies as they are located in different states. This minimum-wage discontinuity allows us to identify its effect on labor market outcomes.

So far, so simple. The Fed folks drew their numbers from the federal-state Quarterly Census of Employment and Wages (QCEW) dating back to the end of 2009 and indexed to a starting point of 100 as of the fourth quarter of 2013, after which New York’s minimum wage began to move in steps much higher than Pennsylvania’s.

They compared the growth trends through the end of 2018. For the leisure and hospitality sector, that produced this chart: 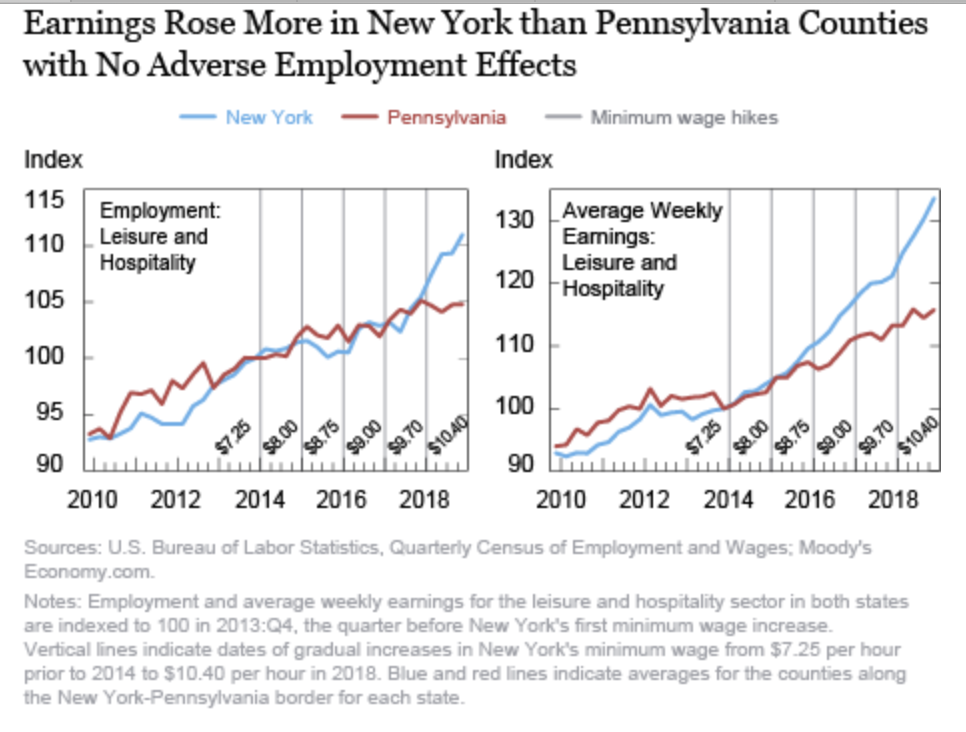 “These trends suggest that the minimum-wage increases had the intended effect of boosting worker pay in low-wage industries, without negatively affecting jobs,” the Fed economists contend.

But the increase in average earnings is hardly a surprise; in fact, it would be headline news if average earnings in a low-wage sector had failed to rise markedly at some point in the state that ultimately increased its minimum wage by 43 percent during this period.

The part of the Fed analysis that will draw the most media and political attention is focused on the job count. The headline over the chart actually understates the result. The trend lines don’t just indicate “no adverse employment effects”: they actually show employment on the New York side of the border increasing twice as fast as in Pennsylvania.

But notice how the blue line, representing the New York side, shoots up in the last year of the data series?  That’s a clue to what’s wrong with this approach. In fact, two noteworthy events—unmentioned in the Fed analysis— happened during those last five quarters:

Casinos are counted in the leisure and hospitality sector.

Then there’s the Orange County factor. The more heavily populated eastern half of Orange is in the heart of the Hudson Valley, part of a regional economy that’s been experiencing a tourism-related boomlet, further boosted by rural gentrification bankrolled by New York City emigres and weekenders.

In addition to sizable tourist attractions such as West Point and the Woodbury Commons Outlet malls, Orange County also benefits from daily commuter flows to and from the nation’s largest wealthy urban area.  The Pennsylvania counties in the border group are, by comparison, mostly small and rural; only Pennsylvania’s Erie County, on the northwestern tip of the Keystone State, has even a mid-sized urban concentration (the city of Erie, pop: 97,000) within its borders.

In fact, the relative wealth of tourists and shoppers in Orange County, and the opening of heavily bankrolled, well-paying casinos in Sullivan and Tioga counties, would explain why New York wages surged even higher after 2016.

Drawing from the same QCEW databased used by the Fed, here are the raw leisure and hospitality employment numbers and 2013-18 changes for all 19 counties, grouped by state—including, importantly, a breakout of New York that excludes the three inflating counties. 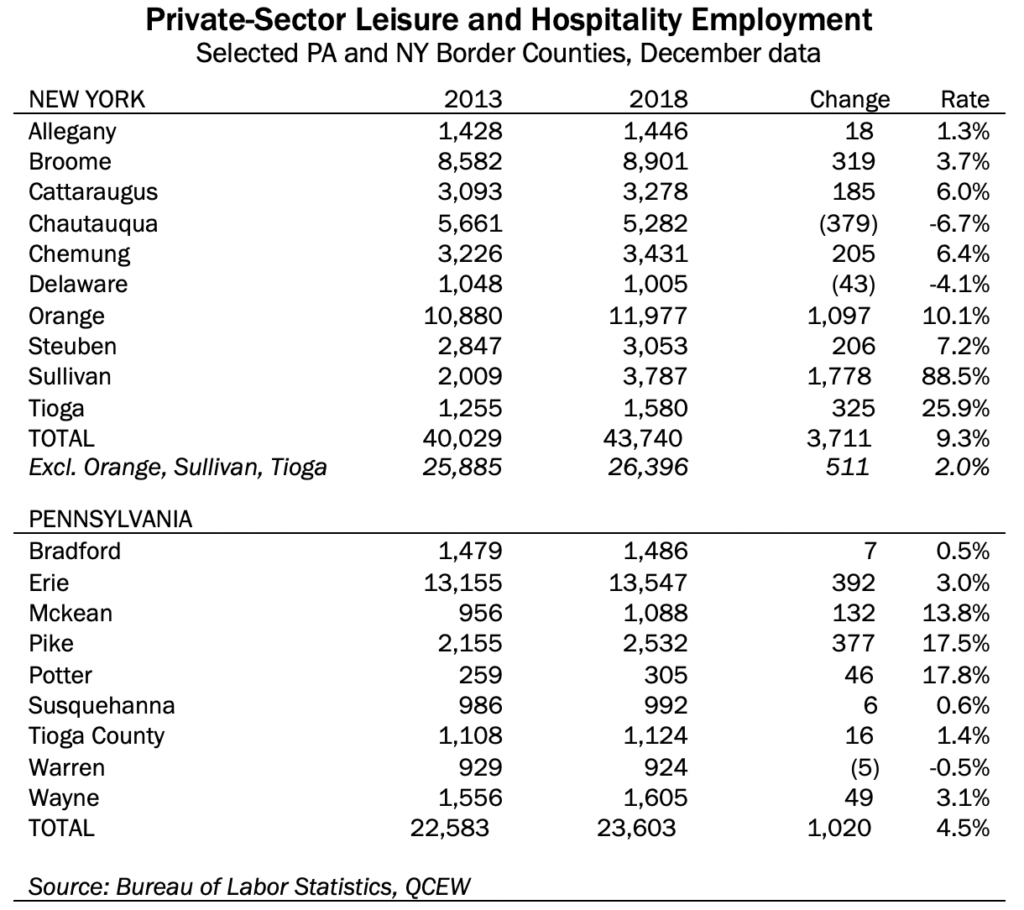 As shown, the change in leisure and hospitality in employment in New York counties was more than 9 percent during the period in question. But that number sinks to 2.0 percent when Orange, Sullivan and Tioga are excluded.

The quarterly data for the retail sector are a little harder to come by; they are not posted at the Bureau of Labor Statistics site and require digging on the respective state websites.  However, a quick check of New York data alone for the border counties in question indicates that excluding Orange, Sullivan and Tioga increases, by about one percentage point, the loss of retail jobs on the New York side of the border, making it slightly worse than the total suggested by the Fed’s chart for Pennsylvania.

Cross-border comparisons became a popular tool among economists for assessing the effects of minimum wage increases following the much-cited Card-Krueger study of New Jersey’s 1992 minimum wage hike. Princeton economists David Card and Alan B. Krueger used survey data to compare employment by fast food chain restaurants (and fast-food outlets only) in all of New Jersey with employment in neighboring eastern Pennsylvania, and not just in counties that lined up along the border.

But while contiguous counties tend to “share a lot of features,” as the Fed economists wrote, such counties also can differ in significant respects that have a bearing on employment growth.

Subsequent studies inspired by the Card-Krueger methodology have been more mathematically elaborate. The Fed’s quickie cross-border analysis was simplistic by comparison—although that won’t stop advocates of higher minimum wages from citing it as if it were slam-dunk, peer-reviewed proof of no impact.

The Fed economists’ blog ends with an appropriate cautionary note. For one thing, even using their method, it’s possible that minimum wage increase reduced the numbers of hours worked, they acknowledge. (Hard hours-worked data at the county and sectoral level are not published by the state Labor Department.)

Finally, as the Fed economists point out, “longer-term effects, if any, remain to be seen.”

“It is certainly conceivable that minimum-wage differentials may affect decisions on firm location, business investment, lease renewal, and the like over a longer time horizon,” they conclude.

That much, at least, is undeniable.