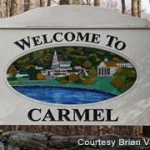 Two local governments have inadvertently turned back a corner of the blanket of silence cloaking the process the state is using to dole out pieces of a $1.1 billion capital project slush fund.

The Village of Warwick in Orange County uploaded, along with its meeting minutes, a 2014 letter (page 18) from state Senator John Bonacic announcing he’s secured funding for the replacement of a park bandshell.

The Governor’s office will consent to this grant, provided it meets the Eligibility Criteria for the State and Municipal Facilities Capital Program.

Meanwhile, the Town of Carmel in Putnam County has given us a glimpse at the final stage of the application process: a blank application to the state Dormitory Authority attached to its request for $200,000 in funding for town park improvements.

The law governing the program does not require any specific process for application or approval of grants, but the Warwick documents imply the requests are flowing through the governor’s office prior to disbursement by the Dormitory Authority, which is borrowing money to cover the costs. It does not explain the breakdown of the funds between the governor and the legislative leaders. The letter is, however, accompanied in the minutes by the following list of eligibility requirements (page 19) which generally track budget appropriations language. The list lays out three previously undisclosed requirements:

The requirements, received by the village in February 2014, predate the Legislature’s expansion of the program’s requirements to include “economic development projects” and other potential recipients in the FY2015 and FY2016 budgets passed in March 2014 and April 2015, respectively.

Note: such documents are not being made public by the Legislature or the governor’s office. Nor is there any suggestion that applicants must demonstrate they have no overlapping interests with sponsors of the projects who are not even identified on the final-stage application.