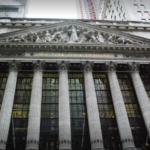 New York City’s five municipal public pension funds ended their 2019 fiscal year with an aggregate investment gain of 7.24 percent, slightly above their 7 percent assumed rate of return, according to a preliminary estimate by city comptroller’s office.

The pension funds’ performance was revealed by Comptroller Scott Stringer yesterday in his report on the city’s adopted budget for fiscal 2020, which he summarized at the annual meeting of the state Financial Control Board.

Because it is used to “discount” the pension funds’ projected future liabilities, the assumed rate of return on pension investments—also known as the “actuarial interest rate,” or AIR—is the crucial determinant of how much money must be extracted annually from city taxpayers to cover promised (and constitutionally guaranteed) benefits to city retirees in decades to come. The higher a pension fund’s discount rate, the lower the contribution required to fully cover liabilities.

The New York City pension funds beat the 6.79 percent average return for all U.S. public funds with fiscal years ending June 30, according to an estimate reported in the Wall Street Journal earlier this week. They also beat the two largest California public pension funds, Calpers and Calstrs, which reportedly had returns of 6.7 and 6.8 percent, respectively.

New York City’s five pension plans (like most of their counterparts across the country) invest 60 to 70 percent of their assets in domestic and global corporate equities markets. During the first half of the 2019 fiscal year, stock market arrows were all pointed downward, with the S&P 500 plunging more than 12 percent by mid-December.

Even after a strong market rebound in the first quarter of the year, New York State’s Common Retirement Fund, which finances pensions for state and local government retirees outside New York City, reported earning just 5.23 percent during its fiscal year, which ended March 31. The city pension funds’ combined return was below 4 percent as of May, based on preliminary figures reported by the comptroller’s office.

Then Wall Street delivered a June boon: a 7 percent rise in stock prices in the final month of the pension funds’ fiscal year, which helped boost overall portfolio values sufficiently to hit the funds’ assumed annual return target before the books were closed on June 30.

Since then, not so good. After moderate gains in July, stock prices have dropped sharply in reaction to various factors including the trade war with China, threats of currency devaluations and interest rate cuts by central banks. After a wild ride yesterday, the major indexes closed 2 to 3 percentage points below their July 31 levels. (As of mid-morning today, they had recovered by roughly a percentage point.) Bond yields, reflected in the value of the pension funds’ fixed-income portfolios, also have dropped.

Over the past 20 years, New York City pension fund returns have experienced some wild ups and downs, which all works out to a compound average annual return of 6 percent, as illustrated below. 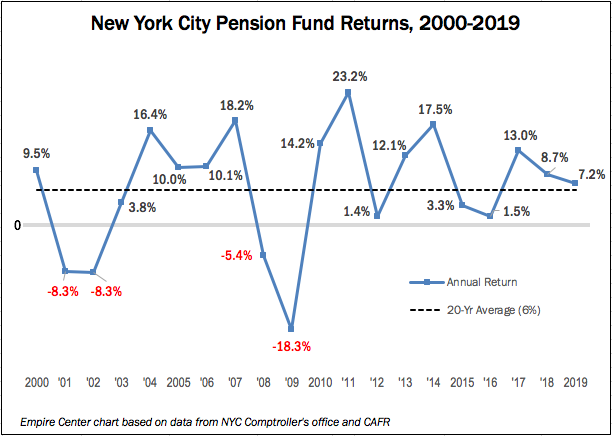 Past results are no guarantee of future performance, of course. But, reflecting the broad consensus of actuaries and financial analysis’s (those not employed by public systems, that is), it would be more prudent for the city to reduce its assumed rate of return. At the very least, it should go down a smidgeon, to 6.75 percent level recommended in 2015 by the city’s own actuarial consultant. As Josh McGee and I wrote in our June 2017 Manhattan Institute report, “The Never-Ending Hangover”:

Even that slight change of 25 basis points would add $655 million a year to pension contributions, according to the consultants’ estimates. That’s still a lot of money. But chipping away faster at the enormous unfunded pension liability is the only way to reduce what other- wise looms as a serious threat to New York’s future.

As of fiscal 2018, the latest year for which an estimate is available, the city pension funds had a combined net liability of $48 billion—meaning they were $48 billion short of what they’d need to meet all obligations vested as of last year. When the 2019 CAFR is issued in the next month or so, that number will probably be lower. But it also will be misleading—since it is based on the assumption of continued annual returns averaging 7 percent, which former Mayor Mike Bloomberg once compared to a promise from Bernie Madoff. Applying a 6 percent discount rate, the 2018 liability would be $23 billion higher, the city reported last year.

The other big New York State pension fund with a June 30-June 30 fiscal year is the New York State Teachers’ Retirement System (NYSTRS). But NYSTRS doesn’t release its pension fund returns until its October board meeting. Based on the city’s experiences, NYSTRS might—just barely—meet its 7.25 percent assumed rate of return.  If it matches the national norm, it will fall short.