It’s all well and good that Assembly and Senate leaders have agreed on a “roadmap” towards adopting a budget by April 1, including a March 15 deadline for passing one-house budget resolutions and forming conference committees, and a March 28 deadline for issuing joint conference committee reports. But when state lawmakers reach the end of the road, how will they know where they are?

Lawmakers won’t know what they are actually voting to spend, or how these figures compare with what the governor proposed, unless they are presented with an updated financial plan before taking up the budget bills.  In the absence of such a plan, it will be impossible to say for sure whether the 2011-12 budget agreement has added to the shortfalls initially projected by Governor Cuomo for fiscal years 2012-13 through 2014-15.

In its most basic form, the financial plan consists of tables detailing projected spending and revenues in major categories, further broken down by fund type.  The governor issues such a plan when he presents his Executive Budget. The Division of the Budget (DOB) customarily updates the plan 30 days after the budget is adopted. (See sample table at bottom of this post, from the Enacted Budget Report. Ideally, there would be one table each for General Fund, State Operating Funds, and All Funds.)

Unfortunately — incredibly, when you come right down to it — state lawmakers do not have this crucial information available to them when they vote on budget bills.  The Senate has occasionally taken a stab at producing a financial plan summary, but the format has been incomplete and inconsistent. In some recent years, the Assembly has distributed to members (but not the public) its own summary rundown of major changes to the governor’s budget proposal.  But there never has been an agreed-upon financial plan table clearly breaking down the final and proposed budget, much less projecting adjusted amounts of spending and revenues for the three out years of the plan.

The Legislature’s consistent failure to produce an updated financial plan to accompany final budget bills is a major shortcoming of the state’s budget process. The need for such information has become even more important now that Governor Cuomo says he wants to discard the traditional financial plan model, which projected automatic spending increases in future years based on a continuation of “current-law” formulas.

Cuomo should pledge to have DOB help the legislative fiscal committee staffs generate a preliminary plan update based on the agreed-upon budget bills. And if the legislative leaders won’t commit to producing a financial plan update, he should order DOB to do it anyway–before the vote. 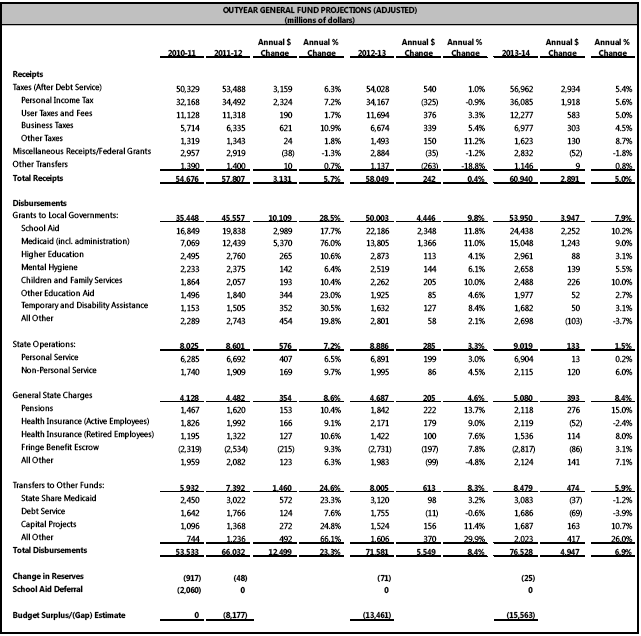