As part of his plan for allocating $5.4 billion in one-shot windfall funds, Governor Cuomo wants to spend $500 million to expand the availability and capacity of broadband Internet access across New York. But given pressing traditional infrastructure needs, should broadband rate a high priority? Do we really need it? The governor’s case, on closer inspection, is less than compelling.

Cuomo’s State of the State presentation in January included a map (see below) purporting to show that 90 percent of the state lacks “adequate” broadband, defined as download speeds of 100 megabits per second (Mbps). 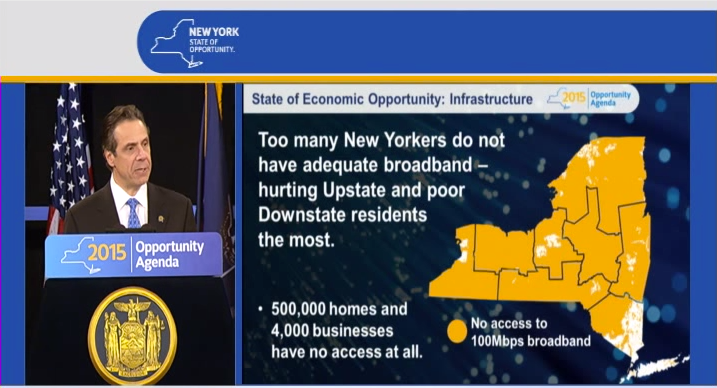 The map isn’t completely accurate, however. For example, it suggests that the entire Rochester area lacks 100 Mbps broadband—when, in fact, the high-speed connections that the governor describes are available from several providers there, such as this one.

Cuomo’s talking points on the issue aren’t entirely accurate, either. For example: “To understand just how slow six Mbps is: it takes approximately 1.22 hours to download a 6 gigabyte movie at that speed. The same movie would only take 49 seconds to download at 100 Mbps.” In fact, at 100 Mbps, downloading a 6 gigabyte movie would take 8 minutes, or almost 10 times as long.

It’s also unclear how Cuomo arrived at 100 Mbps as his broadband benchmark, which is substantially more than most users need. Netflix, for example, recommends a 3 Mbps connection for streaming its content, while Skype recommends a 1.5 Mbps link for high-definition video calls. Typical home connections now range from 2 to 30 Mbps, depending on provider and availability.

Given the relatively low bandwidth requirements for popular consumer products, it’s unclear whether residential customers would opt to pay more for faster Internet access even if the state made it available.

There’s a similar dearth of demand on the commercial side. As Wall Street Journal columnist Holman Jenkins recently pointed out, customers who paid for 100 Mbps connections rarely exceeded even half the available download capacity. In a 2012 study by the National Federation of Independent Businesses, small business owners ranked “access to high speed internet” 73rd most important out of 75 potential “problems” about which they were surveyed.

The relatively few customers needing bandwidth of at least 100 Mbps have, for decades, had the option to purchase high-bandwidth Dedicated Internet Access (DIA) from providers.

Cuomo’s proposal also lacks an important disclaimer: high download speeds are only useful if users connect to a server capable of matching it. Downloading the hypothetical 6 gigabyte movie at lightening speed would only be possible if the host—for example, Netflix or Amazon—is uploading at the same speed. Building an information superhighway with posted speed limits of 100 mph won’t mean much to people driving cars that don’t go faster than 30 mph.

The only clear beneficiaries of this program will be cable and internet providers, who will have a new state subsidy to expand their footprints into areas in which their competitors have demonstrated an inability to operate profitably.

If the legislature wants to see more homes and businesses connected to the Internet, there are better ways to make it happen that don’t involve giveaways to providers. For one thing, the state could repeal its law forcing cable companies to sign a contract with every municipality in which it wants to offer service. The franchise does little more than offer the municipalities the ability to extract payments from the providers. Those costs are typically passed on to consumers, adding to the high cost that the governor is looking to reduce.

Scaling back New York’s regulations would make it easier for providers to enter un-served areas; it would also make it easier for them to enter their competitors’ markets. The big winners there would be the consumers, who would have more choices and presumably lower prices. Keeping the state out of the expansion process would also spare providers from potentially having to comply with prevailing wage and other mandates, which would otherwise drive up costs and make the service less affordable to the very people it’s trying to reach.

“Infrastructure today is less about roads and bridges, in my opinion, and it is more about broadband,” Cuomo said in his State of the State address.  “A state that doesn’t have broadband is not going to be economically successful going forward.”

But for all the hype about the “Internet of things,” people can’t physically transport themselves or their goods on fiber-optic lines. And Cuomo offered no evidence that New York’s economic growth actually has been impeded by a lack of broadband.  In fact, the National Broadband Map (see below) indicates that New York’s most populated areas, like most of the northeast, generally have access to broadband speeds of greater than 25 Mbps. (Note that Texas, growing much faster than New York, is depicted with less land area broadband coverage in this range) 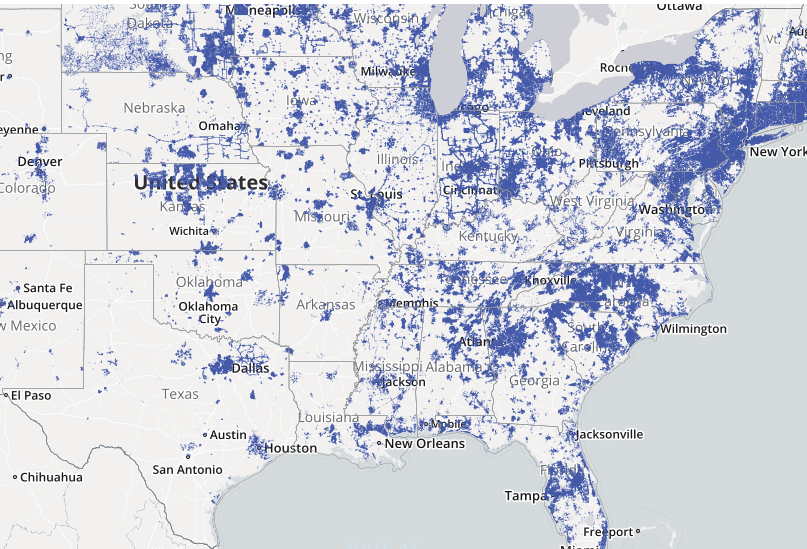 Universal Internet access at much higher speeds than most New Yorkers now need, want or can even use may have a pleasantly futuristic ring. But committing $500 million for that purpose would divert a lot of money from more urgent, basic infrastructure needs.