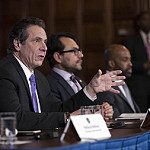 The largest revenue-raiser in the just-completed state budget, worth $2 billion over four years, is not a tax or a fee or even a legal settlement. It takes the form of semi-voluntary “grants” squeezed mostly out of a Catholic Church-affiliated health insurance plan.

In an unusual side deal with Governor Cuomo, the state’s Catholic bishops agreed to provide the state with $1.4 $1.5 billion in proceeds from their pending sale of Fidelis Care, also known as the New York State Catholic Health Plan. The buyer, Centene Corp., is putting in another $600 $500 million.

These payments were crucial to balancing the state’s $168 billion budget, but they were not formally mandated in the “big ugly” revenue bill approved early Saturday or in existing law. Instead, the bishops and Centene executives are effectively buying their way out of a high-pressure standoff with Cuomo and the Legislature.

Fidelis, with 1.6 million members, is the largest provider of the major state-funded health plans for poor and low-income New Yorkers—Medicaid managed care, Child Health Plus and the Essential Plan. It’s also the single biggest seller of federally subsidized “Obamacare” coverage through the state’s insurance exchange.

In September, Centene agreed to buy Fidelis’ assets for $3.75 billion, and the bishops announced they would put the money into a charitable foundation to support health care for the needy.

In his January budget proposal, however, Cuomo argued that state government, as the source of most of the company’s revenues, was entitled to most of the sale price. He cited the precedent of Empire Blue Cross Blue Shield, which converted from non-profit to for-profit status in the mid-2000s with 95 percent of the proceeds going to the state treasury.

But that transaction required a change in the state’s insurance law that was tailor-made to one transaction. As an HMO incorporated under the public health law, Fidelis did not technically need the Legislature’s approval for its deal.

But the sale to Centene did require approval from two state regulators—the Departments of Health and Financial Services—which the Cuomo administration threatened to withhold. Meanwhile, Cuomo targeted Fidelis with a pair of budget proposals: The first entitled the state to claim 80 percent of proceeds if it went through with the sale; the second empowered the state to skim hundreds of millions of dollars in supposedly “excess” reserve funds if Fidelis continued as a non-profit.

Those provisions were not guaranteed to pass the Legislature—or stand up in court—but neither did lawmakers of either party signal opposition to Cuomo’s plan.

Finding seemingly no allies in Albany, the bishops and Centene submitted to a compromise with Cuomo. The first $1 billion is to be paid by the end of July, contingent on DOH and DFS approving the sale to Centene.

The bishops were left with $3.2 billion for their foundation—including the remaining proceeds of the sale and several hundred million in Fidelis reserves.

A statement from Cardinal Timothy Dolan, as quoted by Politico, accentuated the positive: “My brother bishops and I are excited to create a $3.2 billion charitable foundation, which will be the state’s largest foundation supporting the poorest and most vulnerable New Yorkers and one of the largest charities in the country. This is an extraordinary result that will improve the health and well-being of New Yorkers of all faiths, or no faiths at all, from all corners of the state.”

A press release from Cuomo’s office said the state’s $2 billion would go into a “Health Care Shortfall Fund,” where it would be used “to ensure the continued availability and expansion of funding for quality health services to New York State residents and to mitigate risks associated with the loss of federal funds.”

However, the actual budget legislation calls it a “Health Care Transformation Fund” and says the fund will be used “to support health care delivery, including for capital investment, debt retirement or restructuring, housing and other social determinants of health, or transitional operating support to health care providers.” It makes not mention of the possible loss of federal aid.

The state is asserting the right to claw back money it pays to private companies for services rendered—without even an allegation of wrongdoing.

Plus, the state is effectively making its regulatory approval of the Fidelis-Centene deal—affecting the health care of 1.6 million New Yorkers—contingent on the payment of a 10-figure sum.

Also concerning is how the $2 billion is to be spent: Part FFF of the revenue bill, as ratified mere hours after it became public, provides that the funds “shall be available for transfer to any other fund of of the state as authorized and directed by the director of the budget”—in other words, at the discretion of a gubernatorial appointee.

The Assembly and Senate, which ostensibly control the purse strings of state government, can be notified as much as 15 days after the fact.

UPDATE: This post has been updated to correct dollar figures in the second paragraph.