This is the latest installment in a special series of #NYCoronavirus Chronicles by Empire Center analysts, focused on New York’s state and local policy response to the Coronavirus pandemic.

But Comptroller Thomas DiNapoli has just estimated that state tax revenues in the fiscal year starting April 1 will be at least $4 billion to $7 billion lower than Cuomo had projected. Balancing the next budget without raising taxes on struggling individuals and businesses—which Governor Cuomo to his credit, appeared to rule out again today—won’t be accomplished by simply freezing spending.

Cuomo’s $106 billion SOF budget called for a net spending increase of about $2 billion. To line the budget up with revenue reality, total spending will need to be reduced by $2 billion to $5 billion below the FY 2020 level. 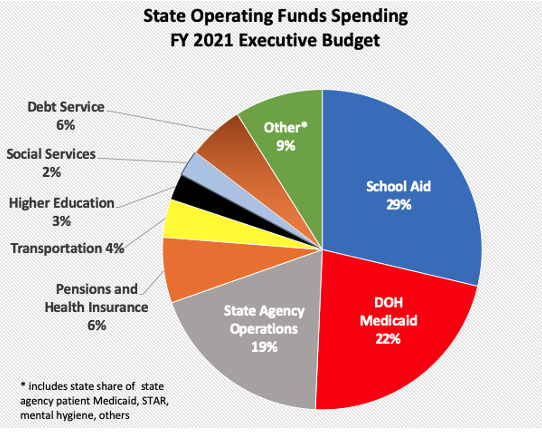 At roughly $30 billion, school aid is the biggest single piece of the pie. Department of Health (DOH) Medicaid, second-largest at $23 billion, is messily intertwined with federal reimbursements and regulations, and further complicated by the coronavirus response.

The spending totals in Cuomo’s budget already assumed $2.5 billion in Medicaid savings would be enacted based on the recommendations of his Medicaid Redesign Team, just now beginning to emerge. Budget cuts affecting state agency operations, the third largest category, are inevitable, but won’t be significant unless they include layoffs on a level the state government has never seen.

A bottom-line New York budget truism: it simply is not possible to even freeze state spending, much less reduce it, without freezing or reducing school aid.

As it happens, this is the time of year when school superintendents and school boards are focused mainly on planning their budgets for the school fiscal year that starts July 1. With the temporary cancellation of classes and suspension of most public meetings, one of the numerous issues preoccupying school officials now is whether the early May date for school budget votes and board elections will be pushed back for at least a few weeks. No one has yet made a formal proposal for a delay, but it’s probably coming.

The Legislature and Governor Cuomo may prefer to sweep it under the rug for now, but the bottom-line issue won’t go away. The state doesn’t have the funds to freeze school aid at current levels, much less increase it next year.  Local school officials need to start cutting their own budgets, now.

If the governor and Legislature concoct some funding gimmick to temporarily prop up current levels of spending—deficit borrowing, say, based on the premise of a hoped-for federal bailout—they will simply be postponing the inevitable.

Sooner or later, sometime in the next few years, state school aid will need to go down, as it last did (by $1 billion) in Cuomo’s first year as governor. In all likelihood, the longer a school aid cut is delayed, the bigger it will need to be in the end.