The pandemic-driven decline in sales tax revenues accelerated in May, when the local share statewide was down 32 percent from last year’s levels, the state comptroller’s office reported today.

And as if their fiscal predicament wasn’t bleak enough, municipalities across the state also were slapped by Governor Cuomo with a potentially costly new executive order requiring them to develop sweeping local police reform plans.

Given the broad economic shutdown imposed by Cuomo’s March 22 “New York State on PAUSE” order, the decrease in sales taxes is no surprise. Nonetheless, seeing the numbers in black and white still is no doubt a sobering experience for county executives, mayors and town supervisors already struggling to mop up pools of budgetary red ink.

Sales tax collections for counties and cities in May, the second full month of the lockdown, came to $918 million, which was down $437 million from the May 2019 total of $1.355 billion, Comptroller Thomas DiNapoli announced. He added:

“The sharp decline in revenues was widespread around the state, ranging from a drop of 19.5 percent in Westchester County to a 41.5 percent decline in Tioga County. Nearly every county in every region of the state saw a large drop in overall collections. New York City experienced a 31.9 percent decline, amounting to $196 million in lost revenues for a single month. One major influence is consumers’ online spending, now largely subject to the sales tax. Detail on this activity is not currently available.”

“We anticipated that sales tax revenues would continue to drop because of COVID-19 but the May sales tax figures show just how deep it is cutting into municipal finances,” DiNapoli said. “Sales tax revenues are vital funding not only for the state but for municipalities like counties and cities as well. The federal government needs to step up and provide financial help to states and local governments hit hard by this virus to avoid severe cuts to critical services.”

As depicted in this chart from the comptroller’s release, the percentage decrease in May was even larger  than the one in April, the first full month affected by Cuomo’s New York on PAUSE order. 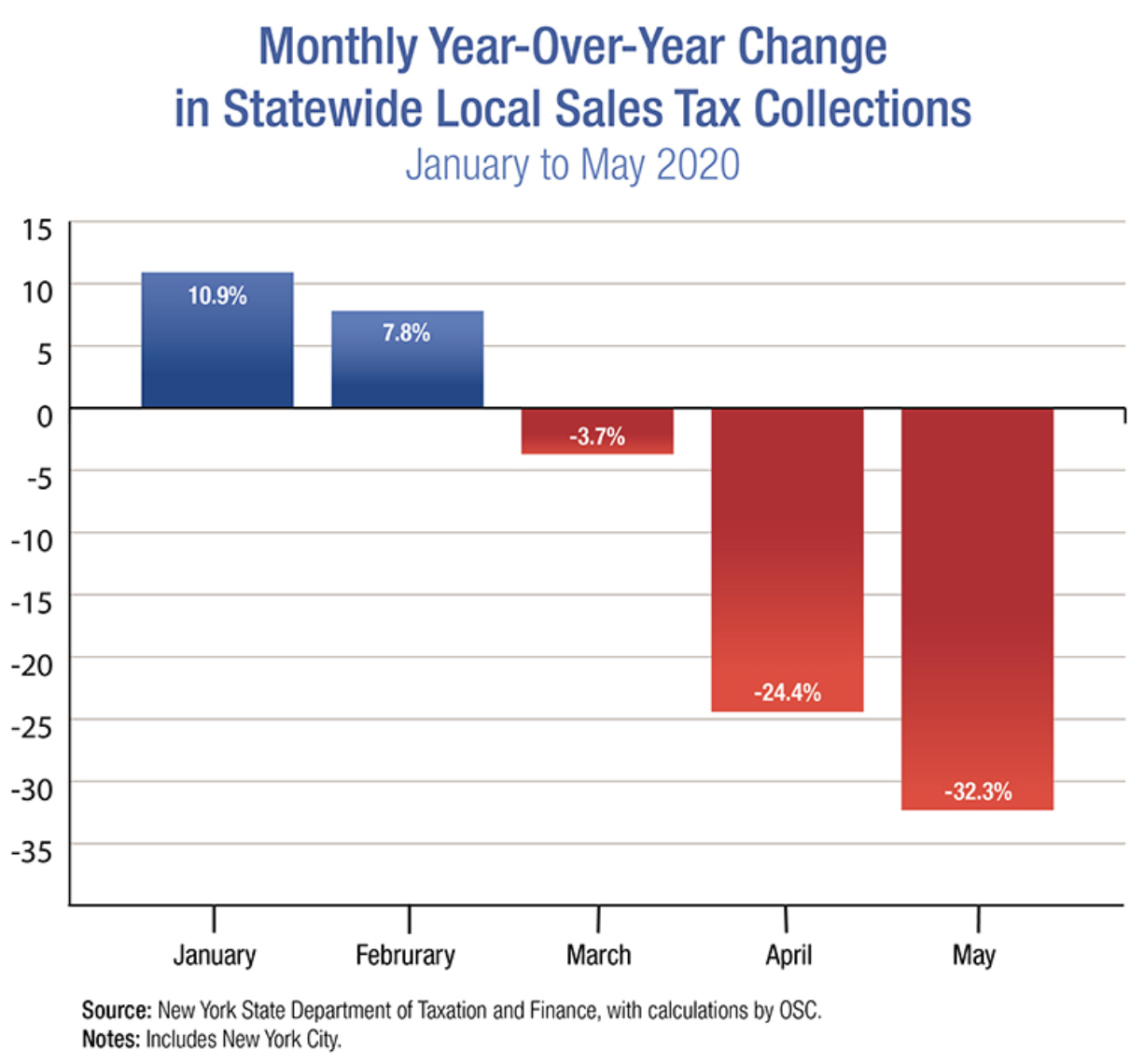 Sales tax revenues were especially vulnerable to the coronavirus lockdown, which shuttered restaurants, hotels and entertainment venues during the normally busy spring season. But local governments dependent on property taxes can’t rest easy, either, especially if they’ve depended for years on the bounty from regional shopping malls. In a brick-and-mortar sector already weakened by the explosive growth of online sales, familiar mall tenants such as J.C. Penney, J Crew, the Gap and Pier 1 Imports are among the national retail chains filing for bankruptcy in the wake of the coronavirus pandemic. Sooner or later, the property taxes assessed against regional malls, longtime local government cash cows, will also fall.

In trying to deal with the economic and fiscal fallout of the pandemic, the 500 New York localities with police agencies—including virtually all cities and villages, most large suburban towns, and three of the state’s largest counties—will find it difficult to rein in their public safety costs, thanks to inflexible collective bargaining agreements further protected by the ability of police and firefighter unions to invoke binding arbitration of contract impasses.

And now all of those employers face an added challenge, courtesy of Governor Cuomo.

At a media briefing where he signed into law a set of police disciplinary reform bills just passed by the Legislature, Cuomo announced he would be signing an executive order mandating what the called the “New York State Police Reform and Reinvention Collaborative.”

The text of the order itself wasn’t immediately made public, but a press release from the governor’s office said all local governments with police departments would be required to “to develop a plan that reinvents and modernizes police strategies and programs in their community based on community input.” Further, the release said, every plan “must address policies, procedures, practices and deployment, including, but not limited to use of force.”

In his extemporaneous remarks, Cuomo said that such plans must be enacted as local laws by next April 1, and “if it’s not done by April 1, if it’s not passed, they’re not going to be eligible for state funding, period.” The subsequent press release from his office was a little cagier on that point, saying only that “if [a] local government does not certify the plan, the police force may not be eligible to receive future state funding.” [emphasis added]

In fact, local police agencies across New York generally don’t receive direct funding from the state to begin with. Pending further details of the order, Cuomo’s threat might have been aimed at AIM—i.e., the general and unrestricted flow of Aid and Incentives for Municipalities funding to most of the cities, villages and towns that have police departments.

Cuomo’s legal authority to unilaterally restrict or withhold a statutory aid stream is questionable. The April 1 deadline, coinciding with the start of the next fiscal year, indicates the governor might be planning to seek language in the FY 2022 budget to back up the order.

Adding insult to the fiscal injury for local officials, Cuomo framed the order as a response to decades of  “systemic discrimination and injustice in this nation,” requiring “systematic reform of police departments”—and went on to imply that people throughout New York State, without exception, do not trust their local police departments.

He did not offer any evidence that a lack of trust for police—much less systemic discrimination or brutality—is a problem throughout New York State. As even a cursory study by the governor’s office would have determined, many of the larger urban agencies affected—including the New York Police Department—no doubt already have policies touching upon some or all of the areas covered by Cuomo’s order. Nonetheless, as municipalities grapple with the worst economic and fiscal crisis since the Great Depression, the planning and public consultation requirements of Cuomo’s order will at best be a time-consuming distraction.

The governor’s order conveniently sidestepped the issue of police unionization and collective bargaining rules that actually do impair accountability and transparency of disciplinary practices in many localities.

When the issue was raised during the media question-and-answer period, the governor said the planning process required by his executive order “is a reinvention, [so] they can do whatever they want.” He continued:

A the governor surely knows, or should know, it’s not actually that simple. The flexibility to reorganize police agencies is greatly restricted under the Taylor Law, which regulates public-sector labor negotiations and contracts in New York State. When the issue of police union power was raised, Cuomo replied:

When you talk about ending unions … that is a cruel irony. If you’re going to end police unions, do you end other public sector unions, right?

Now there’s a question worth pondering.