The more time passes since the spring 2020 Covid-19 outbreak, the more New York stands out among all states for the weakness of its post-pandemic employment recovery.

As of December, seasonally adjusted private employment in New York was still nearly 237,000 jobs below the February 2020 level, according to preliminary federal and state estimates. Only 18 other states were below their pre-pandemic job counts by that measure—and New York’s shortfall of 236,600 jobs was by far the largest. In percentage terms, only Hawaii, Vermont and North Dakota had bigger job deficits.

By contrast, at the other extreme, private employment in Texas and Florida was up 6.7 percent (740,000 jobs) and 6.6 percent (527,000 jobs), respectively. Even in California, whose pandemic lockdown restrictions rivaled New York’s for duration and severity, private employment was up 0.9 percent (143,000 jobs) from the pre-pandemic level. The 50-state pattern is illustrated below.

As shown below New York had roughly matched the U.S. private-sector job growth trend from the end of the Great Recession in 2010 until late 2019, when it began to fall behind the national pace. Starting in March 2020, New York’s severe Covid-19 outbreak and then-Governor Cuomo’s emergency lockdown orders were followed by a near-vertical plunge in job totals, which bottomed out much further below the all-U.S. total. The Empire State’s recovery path remains roughly parallel to but well below the national trend, as shown below.

Based on the state Labor Department’s monthly jobs report, December saw a continuation of a regional imbalance that began to emerge in mid-2022: New York’s job rebound is now concentrated downstate, which was also hardest hit by the pandemic and its associated economic disruptions. As shown in a table, below, from the Labor Department’s release, New York City’s private job growth rate of 5.1 percent on a year-to-year basis was considerably above the national pace of 3.2 percent, and even further above the sluggish pace of job creation in most other metro areas within the state.  In upstate New York, the only labor market to exceed (slightly) the statewide and U.S. employment gains was Binghamton, which in the longer term has been among the most economically stagnant metro areas in the Northeast. 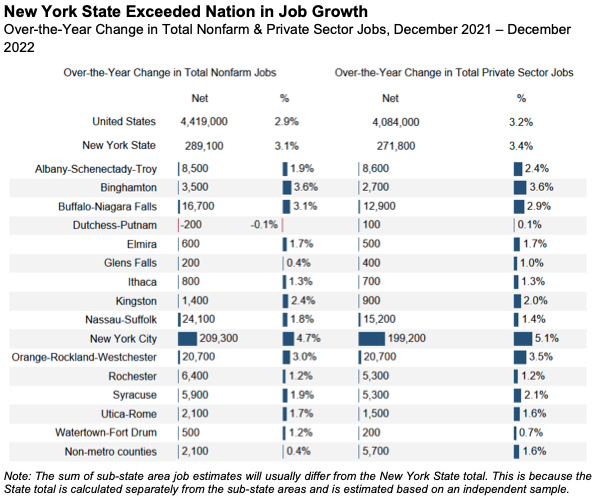 Looking at industrial sectors, the biggest job gains were in leisure and hospitality, which was hardest hit by the pandemic, and education and health care, which also reflects a recovery from an exceptionally steep drop in 2020.

It’s important to note that the December figures are not final. The Labor Department is now engaged in its annual “benchmarking” exercise, adjusting the monthly estimates of payroll jobs based on statistical sampling to reflect actual Unemployment Insurance filings for the entire universe of New York employers. This always produces some change in the numbers for the preceding months of April through December—in some years, pretty big changes, of magnitude if not direction—which will become apparent when the annually adjusted numbers for 2022 are released in early March.

New York’s monthly unemployment statistics—reflecting employment based on the residence of workers, as opposed to the location of employers—showed a somewhat different trend, with joblessness rising in New York City (to 5.9 percent) even as it declined slightly in the rest of the state (t0 an ultra-low 3.2 percent), as shown by this Labor Department chart. By comparison, the national unemployment rate was down slightly, to 3.5 percent, the lowest level in 50 years. 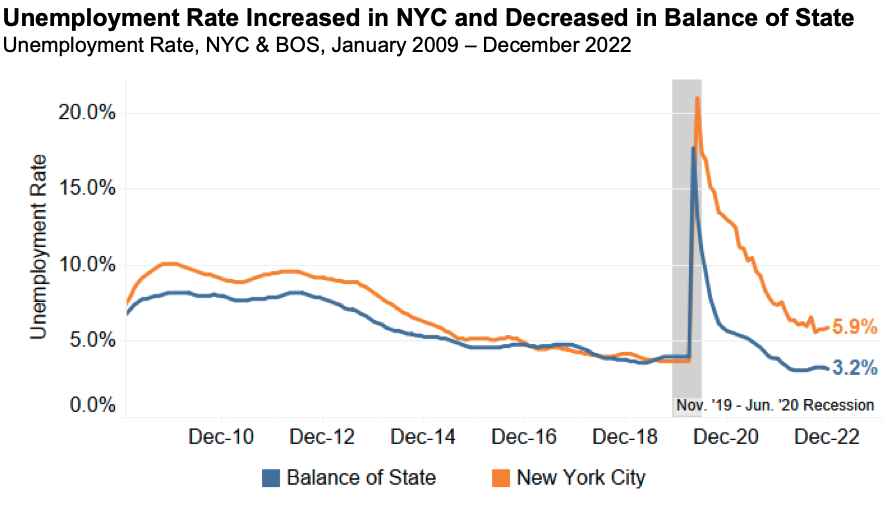