The Empire State’s private-sector employment gains over the past year have been increasingly concentrated in New York City, which was a national epicenter of job losses following the Covid-19 outbreak in 2020.

While the pace of New York City’s recovery has been accelerating, the rate of employment growth has been slowing in upstate metro areas, the latest state Department of Labor (NYSDOL) data indicate.

On a year-to-year basis, the statewide private jobs count in June came to just over 8 million, according to the NYSDOL’s monthly report. That represented an increase of 5.7 percent from a year earlier, compared to a 4.8 percent gain for the nation as a whole during the same period.

Upstate, by contrast, the combined year-over-year gain of 76,000 jobs represented a growth rate of just 3.5 percent. Among the largest upstate metro areas, only Buffalo-Niagara Falls was able to match the national growth rate of 4.8 percent.

Back to the starting line

Another way of comparing the job rebounds on a regional basis is by looking at year-over-year differences in total private employment starting in January 2020, just before the pandemic hit. 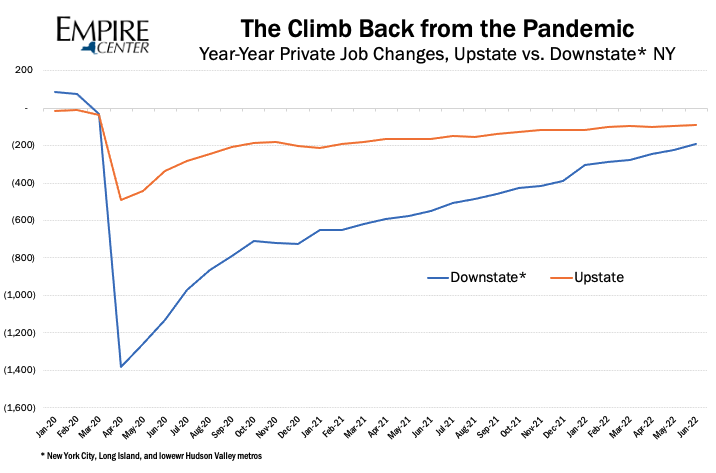 As shown above, private employment in New York City and its suburbs dropped by nearly 1.4 million jobs in April 2020, accounting for three quarters of the total statewide decline after the initial Covid-19 outbreak and the lockdowns mandated by Governor Cuomo’s New York State on PAUSE order.

In 25 months since that low point, however, the downstate region has closed relatively more of its 2020 job gap. Last month, New York City and its suburban counties were within 194,000 jobs (3.2 percent) of their combined June 2019 job total, while upstate as a whole was still 90,000 jobs (3.8 percent) short of its last pre-pandemic June count. Meanwhile, private employment in the nation as a whole was back to 1 percent above the June 2019 level.

Sluggish job growth upstate dates back well before the pandemic. In fact, the private job count for the region was down slightly on a year-to-year basis in January 2020, two months before Covid hit.