IMPORTANT: See correction update at end of this post.

As of February, job counts in 15 states had surpassed their pre-pandemic employment levels, according to federal Bureau of Labor Statistics data released today. The nation as a whole had recovered 19.6 million of the 21 million jobs lost in the spring of 2020, placing it within 1.1 percent of fully recovering from the pandemic based on seasonally adjusted estimates.

New York, however, was still 5.4 percent below its pre-pandemic employment level. On a percentage basis, only Hawaii was worse off.

State COVID-19 lockdowns and other restrictions alone don’t seem to provide much explanation for these differences. The neighboring states of New Jersey, Connecticut and Massachusetts were also hit hard and early by the COVID-19 outbreak of March 2020, yet all three were much closer to fully recovering their lost jobs in February. California, which imposed similarly tight restrictions on normal business and public activities, was 1.6 percentage points below its February 2020 total; with an employment base nearly twice as large as New York’s, California was only 243,000 jobs below its pre-pandemic employment level.

During the month of February, employment in Texas and Florida—which had less stringent Covid restrictions—continued growing to new all-time highs, 2.2 percent and 2.4 percent, respectively, above their pre-pandemic level. Two years earlier, Florida had 399,499 fewer private-sector jobs than New York; but as of last month, private employment in the Sunshine State had grown to 244,000 jobs above the New York level. The Southeast and Mountain West states, with few exceptions, have recovered from the pandemic recession more quickly than the Northeast and Upper Midwest.

One a non-seasonally adjusted basis, comparing February 2022 to February 2020, the U.S. was a single percentage point below its pre-pandemic employment total while New York State as a whole was still 5.5 percent short of the mark.

Unsurprisingly, the state’s employment loss has been concentrated in New York City, the epicenter of the pandemic, which was still 282,700 jobs, or 6.9 percent, below the employment level of two years’ earlier. However, all but one of New York’s 14 other metro areas also trailed well behind the national jobs recovery rate. The exception was the smallest, Watertown-Fort Drum, where employment as of February was up 1.4 percent from 2020. 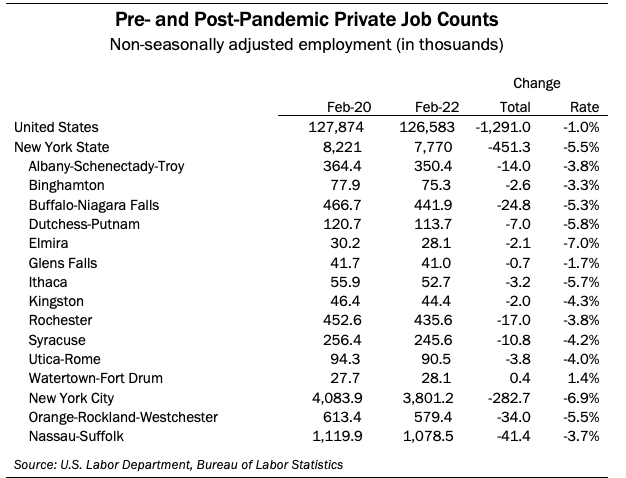 In response to the especially severe impact in New York, the federal government over the past two years has flooded the state with wave after wave of aid, totaling more than $270 billion. The state’s senior U.S. senator, Majority Leader Chuck Schumer, has boasted that the influx of federal money “enabled us not only to overcome Covid, but to get out of the ditch and begin to move forward again.”

But as the employment figures continue to show, the Empire State’s forward progress since the Covid outbreak has been exceptionally slow—suggesting it will take more than federally subsidized government spending to ignite the economic growth New York needs.

Due to a data transcription error by the author, the original version of this post, including the rollover map of the 50 states, contained inaccurate percentage values for changes in seasonally adjusted employment for New York and other states from February 2020 to February 2022 (the percentages as originally reported were erroneously calculated from a March 2020 starting point).

The map has been updated with correct percentages, and percentages updated in this post are indicated with boldfaced type.  Also updated, as indicated in boldface, is the number of states that as of February had exceeded their pre-pandemic employment levels (the correct number is 15).