New York’s preliminary employment numbers for August were a near-repeat of July: private-sector job creation in the Empire State trailed the national average, with nearly all the net gains concentrated in New York City and its surrounding suburbs.

On a year-to-year basis, New York State as a whole added 120,400 private jobs between August 2015 and last month, a growth rate of 1.5 percent during a period when private employment nationally grew by 1.9 percent, according to today’s state Labor Department report. A whopping 96 percent of the state’s net new jobs were created downstate, including 89,400 in New York City alone, which translated into a healthy annual gain of 2.4 percent for the city.

Buffalo-Niagara Falls turned in the strongest performance of any metro area upstate, gaining 7,900 private jobs over the past year for a 1.7 percent growth rate. The Albany-Schenectady-Troy, Rochester and Syracuse areas all lost private-sector jobs during the period—as did Binghamton and Elmira in the sickly Southern Tier. 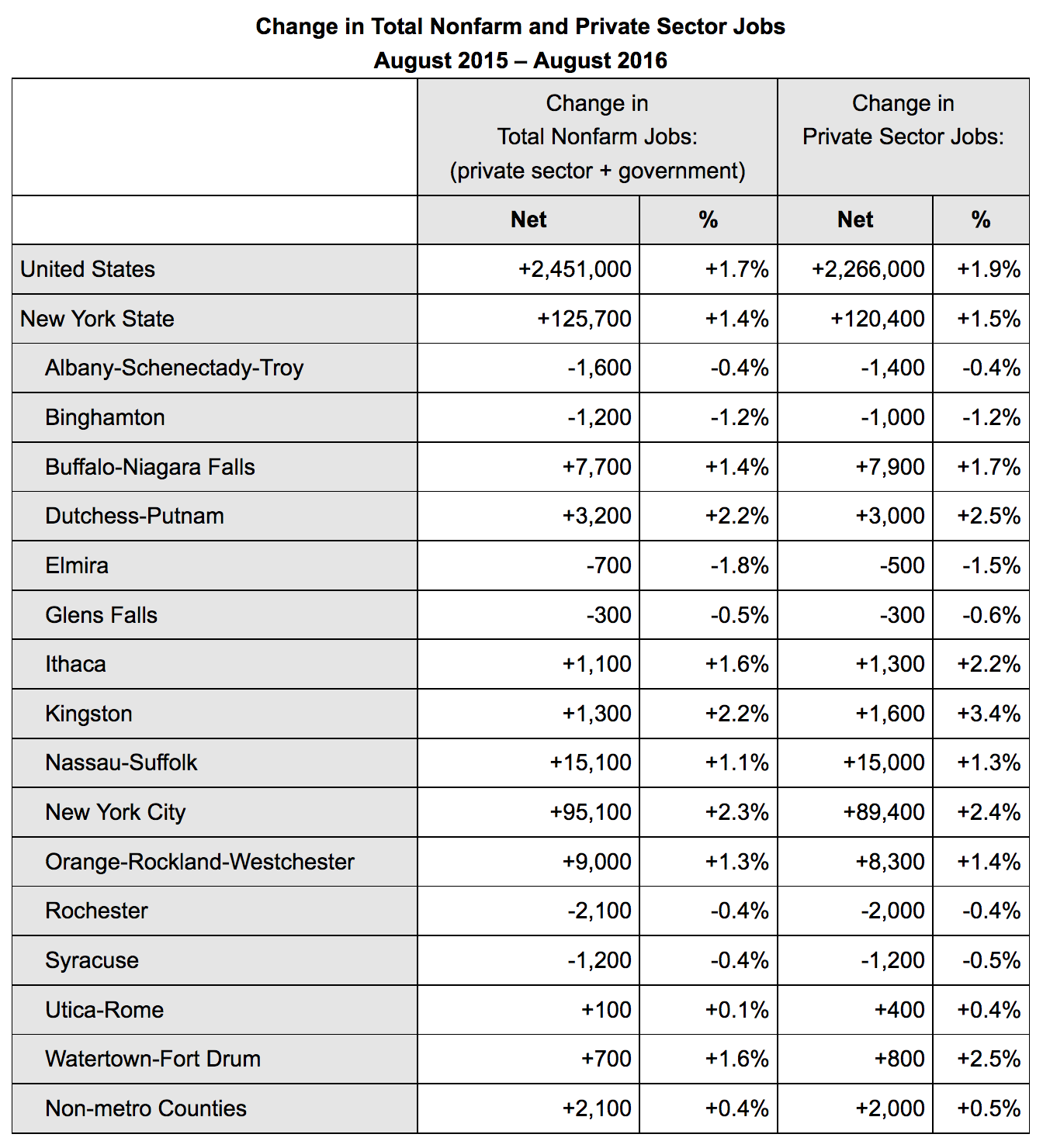 Mirroring a national trend, New York’s seasonally adjusted statewide employment rate increased very slightly, to 4.8 percent in August from 4.7 percent in July.  That increase was concentrated entirely in  New York City, where the rate rose to 5.4 percent from 5.2 percent. Based on previous trends, it seems likely the New York City uptick reflected a continuing increase in the number of people entering or re-entering the workforce, while the flat-to-declining unemployment rates in upstate regions are due mainly to stagnation or decline in the number of people looking for work.

Meanwhile, in other economic news, firms responding to the Empire State Manufacturing Survey reported a slight decline in business activity in September. The research staff of the Federal Reserve Bank of New York, which conducts the survey, said 22 percent of respondents reported that business conditions had improved over the month, while 24 percent reported that conditions had worsened. The respondents were more optimistic about conditions six months down the road, but future expectations measured by the survey have not always strongly correlated to actual results in the past.