New York State residents pay some of the highest local taxes in the nation. To help New Yorkers compare some of the basic fiscal measures for local governments, the Empire Center for Public Policy has calculated effective property tax rates and per-capita values for the spending, debt and tax levels of counties, cities, town and villages throughout the state, excluding only New York City.

Derived from statistics gathered annually by the Office of the State Comptroller, the result is a database of measurements that taxpayers can use as benchmarks for evaluating local governments.

Businesses have long known the benefits of benchmarking – measuring performance against standards set by competitors and peers. Benchmarks in isolation may say little about the quality of management or public services in different communities; however, by spotlighting differences and trends, the benchmarks in this report provide a framework for evaluation. And they provide goals for improvement for governments that need to compete more effectively to attract jobs and promote economic growth.

Our statewide findings, displayed in Table 1 on page 4, provide high, low and average benchmarks for the major categories of spending, taxes and debt. We further break down findings for small, medium and large jurisdictions.

Here are just a few examples of what the data show:

To further empower taxpayers to dig beneath the summary numbers, we have created a searchable online tool, including categorical breakdowns of spending, for 2,297 counties, towns, cities, villages and school districts in the state. Benchmarking NY at SeeThroughNY.net lets users rank and compare spending, tax and debt levels for local governments. Including the 2013 fiscal year data, there are now eight years of data to explore in Benchmarking NY.

Considered on a statewide basis, the data reflect vast differences in the cost of living and in property values between upstate and downstate regions. Downstate communities have below-average effective property tax rates (but above-average per-capita taxes), while effective property tax rates tend to be highest upstate. Even allowing for such differences, however, grouping local governments by region and size reveals significant differences among peers.

For example, the city of Glens Falls spends 50 percent more than the similarly-sized city of Cohoes. The northern Westchester County town of Yorktown spends twice as much per-capita as the neighboring town of Cortlandt. In Central New York, the city of Oswego spends 76 percent more per capita than the city of Cortland. The data offer possible answers for such disparities (among other things, Glens Falls spends more than most on transportation, while Yorktown spends heavily on public safety and sanitation). Local officials can undoubtedly add some explanations of their own.

The purpose here is not to stigmatize, but to raise questions— and to promote a more-informed public discussion of the forces driving high local taxes in every corner of New York.

The sluggish economic recovery in the aftermath of the Great Recession has only intensified the urgent need to reduce taxes at every level of government.

Governor Cuomo has focused on shared services and consolidation as a response to high local spending and taxes. To be sure, there are opportunities in this area, as the Empire Center has highlighted in two reports. [i] The good news is that there already are many cases of service-sharing arrangements involving different government entities throughout the state. These arrangements can be expanded or serve as examples for more jurisdictions.

However, consolidations or service-sharing arrangements are not a panacea. [ii] It’s time to start seriously scrutinizing our local governments’ bottom lines. It’s time to demand appropriate actions to reduce costs, improve efficiency and make our communities more affordable and competitive. Benchmarking fiscal outcomes is a necessary first step towards achieving these goals. 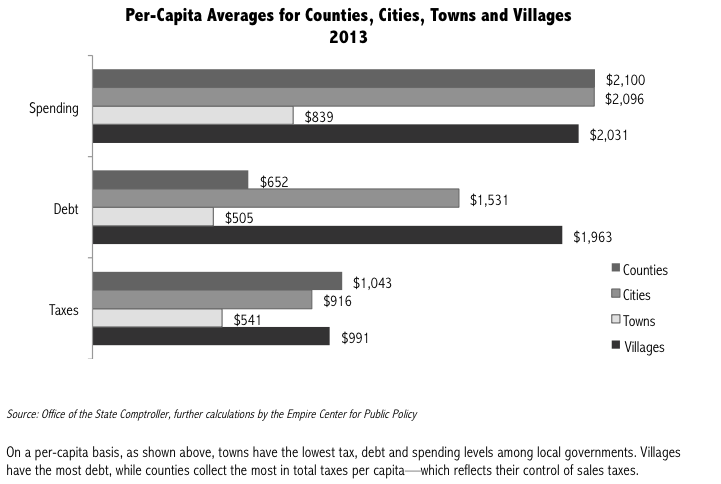 Local governments and school districts report their expenditure, tax and debt data in annual reports compiled by the Office of the State Comptroller (OSC), which in turn posts the data on the Internet.

To allow for more meaningful comparisons, the Empire Center recalculated the OSC data on taxes, debt and spending as per-capita values—i.e., relative to population. Property tax burdens were recalculated as effective rates, based on OSC estimates of assessed property values converted to full value based on equalization rates. Local governments also were organized into population size bands—small, medium and large—based on population. Finally, they were grouped by area and by economic development region.

A searchable database of comparative tax and spending data for local governments has been posted at SeeThroughNY.net/benchmarking-NY.

The database allows users to generate a single benchmark report; a comparison of several local governments; or a ranking of local governments for different measurements of taxes, debt and expenditures. Users can also download the complete spreadsheets used to generate the reports. 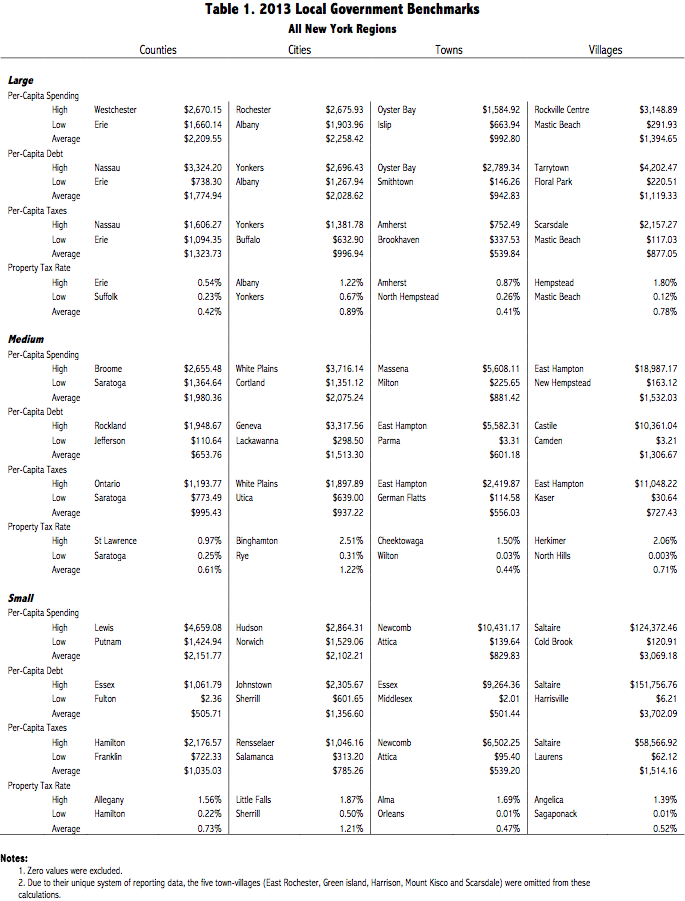 1  See, for example, Cox, Wendell Government Efficiency: The Case for Local Control. Albany, New York: The Association of Towns of the State of New York (2008).