The past year has taught a painful lesson about the importance of public health defenses, not just in terms of preventing sickness and death, but also preserving our economy and way of life.

When the novel coronavirus struck in early 2020, only a handful of countries were fully armed against the threat with well-organized strategies for disease surveillance, testing, contact-tracing, quarantining and infection control.

Most places, including the United States in general and New York in particular, were caught tragically unprepared—in part because they had allowed their public health systems to languish for lack of attention and resources.

You have heard testimony today about the ways in which Governor Cuomo’s executive budget would cut certain parts of Medicaid. In spite of the current fiscal crisis, however, his proposal calls for Medicaid spending as a whole to increase by $4 billion, or 4.7 percent—which is consistent with the faster-than-inflation pattern of the past six years.

The state’s allotment for core public health functions is tiny by comparison, a fraction of 1 percent of the Medicaid budget. And that share of the state budget has been flat or declining for the past decade, at least in terms of what the public can see.

Take the example of the Wadsworth Center, one of the world’s foremost public health laboratories—whose recent accomplishments included quickly developing an alternative coronavirus test when the CDC’s test proved unusable.

Similarly, the branch of the Health Department whose portfolio includes managing infectious diseases, the Center for Community Health, has seen its budget stay virtually flat at about $175 million since 2011, a period when the consumer price index rose 16 percent.

Staffing for these functions suffered correspondingly. According to employment data from the Budget Division, Wadsworth has lost 415 full-time equivalents since 2011, a 66 percent drop, and the Center for Community Health has lost 118 FTEs, a decline of 19 percent.

These downward trends came in spite of increasing support from Washington. Federal support for the Health Department’s operating budget has jumped 120 percent since 2011, from $1.7 billion to $3.8 billion, even as the state’s contribution dropped 33 percent, from $2.5 billion to $1.7 billion. 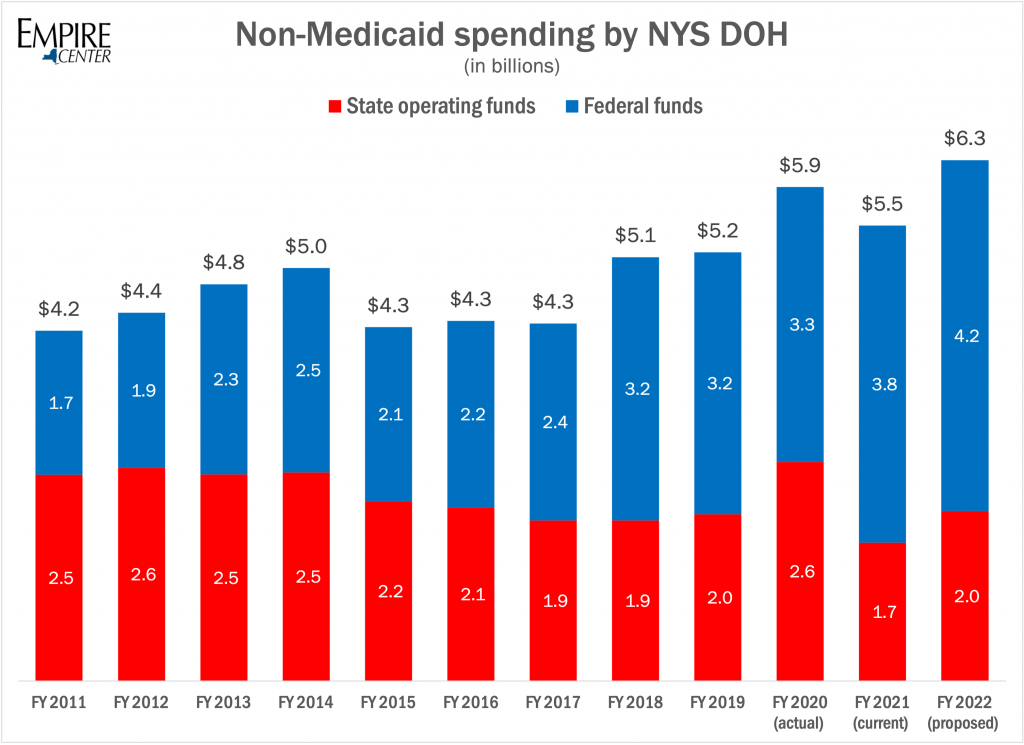 The above figures come with a significant caveat: They do not reflect the activities of Health Research Inc., a quasi-governmental entity established to handle research funding on behalf Roswell Park Cancer Institute that has morphed into a de facto adjunct to the Health Department.

HRI’s finances are not included in state budget documents even though its tax forms show $1.3 billion in expenditures during fiscal 2020. It also employs an unknown number of people who function as state personnel. Since it appears to be playing a large and growing role in public health and other core state functions, the Legislature should insist on full transparency from this organization.

HRI’s role notwithstanding, there is little doubt that New York allowed its public health infrastructure to shrink, both in terms of funding and personnel, in the years leading up to the worst public health crisis in at least a century.

This was a historic mistake. Every negative effect of the pandemic—the massive loss of life; the disproportionate impact on the elderly, the poor and people of color; the devastation for small businesses; the disruption of schools; the infringements on freedom—could have been prevented or minimized by a more effective public health response.

Even as state leaders for years pinched pennies on public health, they spared no expense on the downstream portions of the health-care system: hospitals, nursing homes, clinics and other acute-care providers. 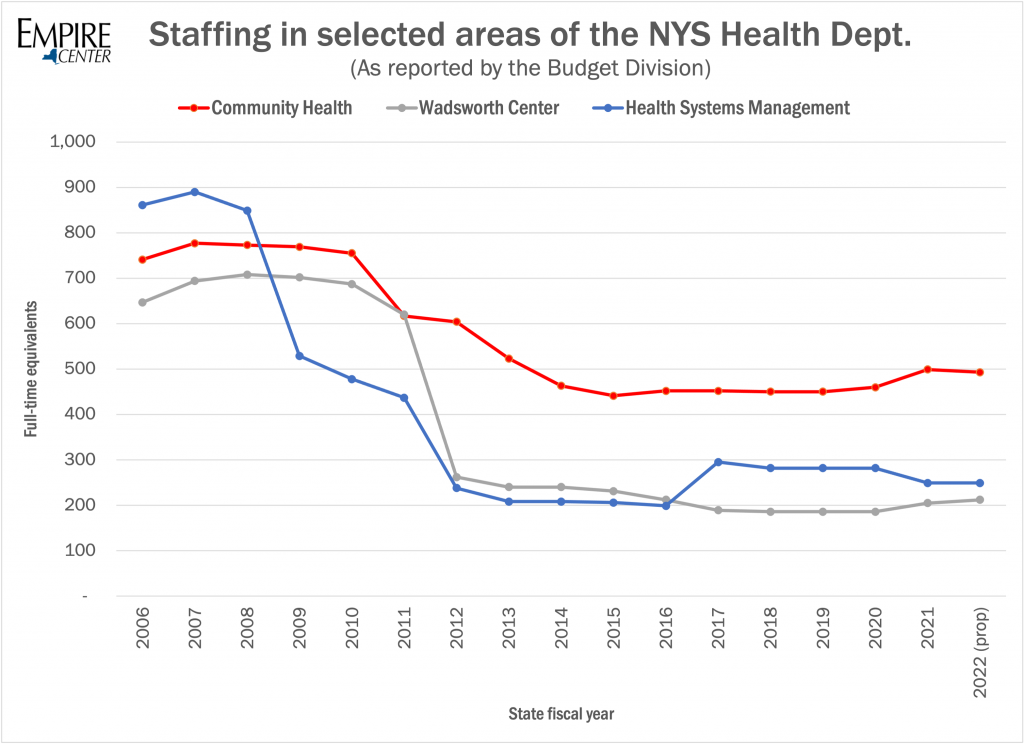 The program that dominates the health-care budget—and much of the debate in Albany—is Medicaid, which finances the acute and long-term care needs of lower-income and disabled residents.

New York’s per capita Medicaid spending is an outlier—more than double the national average and 29 percent more than the second costliest state, which is Alaska.[i] Even from that high level, there is constant pressure to spend more, and costs have repeatedly and substantially exceeded the budgeted amount in recent years.

Rather than moving effectively to contain this unsustainable growth, the Cuomo administration has contributed to it. The administration has disregarded its own inflation-based cap on Medicaid spending, dropped monthly financial reports, concealed burgeoning cost overruns and delayed billions in payments rather than confronting deficits.[ii]

The underlying fiscal imbalance in Medicaid, which dates back years before pandemic, remains unresolved to this day.

Last year, the Legislature approved $2.5 billion worth of cost-cutting changes recommended by the Medicaid Redesign Team, which would have slowed the program’s growth. But many of those changes have not come to fruition, either because implementation has taken longer than planned or because they were stymied by “maintenance of effort” rules that Congress imposed on its coronavirus relief funding.

Other MRT changes seem likely to backfire—such as the drug “carve out” which would remove pharmaceutical benefits from the control of Medicaid managed care plans and put them under the direct supervision of the Department of Health.[iii] This would reverse one of the most effective reforms of the governor’s original Medicaid Redesign Team, which led to a dramatic drop in per-prescription costs.[iv]

This year’s executive proposal makes little effort to grapple with Medicaid’s spiraling costs. Instead, it anticipates a 4.7 percent increase in total spending that will be financed almost entirely by a pandemic-related infusion of temporary federal matching funds. That funding is due to expire as soon as the pandemic emergency is declared over, which will leave New York with even more gaping budget hole to fill.[v]

Meanwhile, the governor is proposing real year-to-year cuts in public health funding. The Health Department’s total state operations budget would fall 7 percent, from $3.5 billion to $3.3 billion. Wadsworth would lose 38 percent—more than a third of its appropriations—going from $78 million to $48 million. One modest exception is the Center for Community Health, which is slated to gain 5 percent, from $176 million to $184 million.

By the usual rules of Albany’s budget process, public health struggles to compete for limited resources. Medicaid is an $83 billion program that finances a major portion of the state’s economy. The businesses and organizations that draw revenue from it are well organized and command a legion of representatives at the Capitol. The public health lobby is thoroughly outgunned and too often ignored.

Yet public health is the ultimate form of preventive medicine. As we know from the recent experiences of better prepared countries, a relatively small strategic investment in pandemic preparedness has the power to save countless lives and avoid massive disruptions to the economy and normal life.

New York should make that strategic investment. Doing it properly starts with a thoughtful examination of how the state’s public health infrastructure performed during this pandemic, and an honest assessment of where it needs improvement. An investigation by independent experts should be commissioned.

Bolstering the state’s public health system also requires at least some money—most likely a mere fraction of the annual increase in Medicaid.

The governor’s proposal would continue the long-term disinvestment and disregard of public health that left New York vulnerable to the worst natural disaster of modern times. It’s up to the Legislature to change that direction.

[i] See “New York Has Widened Its Lead in Per-Capita Spending on Medicaid,” empirecenter.org, July 31, 2020. https://www.empirecenter.org/publications/new-york-has-widened-its-lead-in-per-capita-spending-on-medicaid/