This testimony therefore focuses on the implications of maintaining the existing regime. A few specific tax-related proposals in the budget also deserve comment, however, and that is provided at the close of this statement.

A spike in tax revenue in the immediate aftermath of a historic increase in PIT rates on millionaires may invite further testing of the limits of tax progressivity. But a closer look shows New York’s propensity for “taxing the rich” has cost the state — and that those costs are likely to rise. High stakes gambling on an inherently unstable revenue source also puts the state’s finances at increasing risk.

For the 2019 tax year, the lower half of earners among New York State tax filers paid net zero income taxes to the state. Most of these filers had negative tax liability, due to receipt of refundable tax credits. 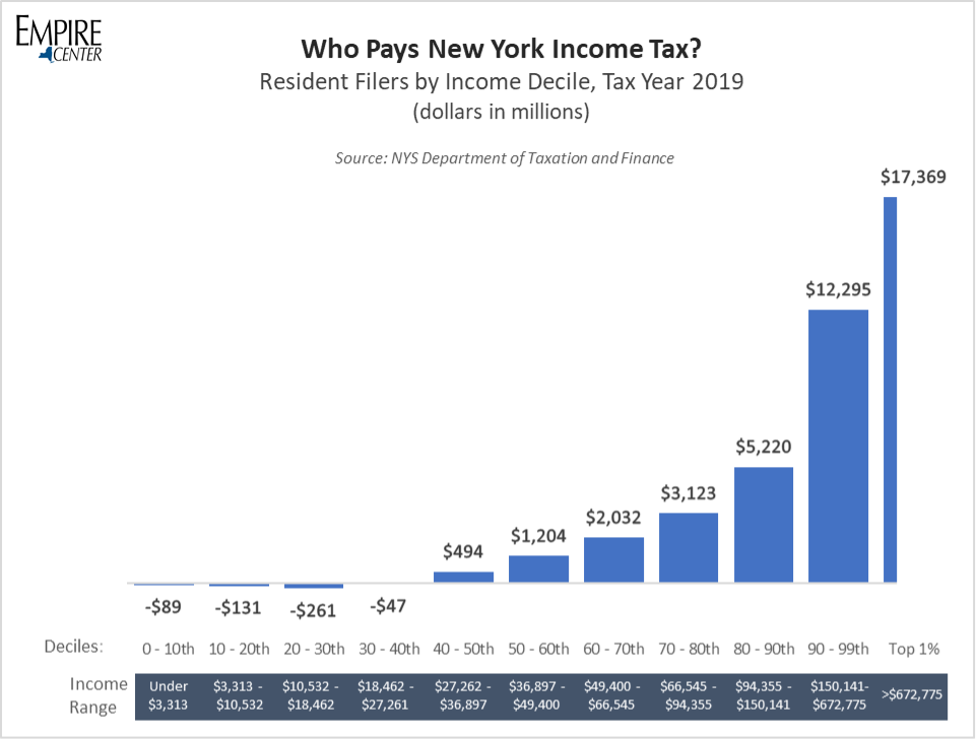 That top earners contribute well more than their income share helps explain why a widely used measure of tax progressivity, the Reynolds-Smolensky index, rates New York’s as the most progressive state income tax.ii

That was the case prior to last year’s PIT increases, which were entirely aimed at millionaires, increasing further their tax share and the code’s progressivity.

As a result, top earners in New York City, with its separate 3.9 percent top rate, now pay the highest combined state and local income tax rate in the United States, at 14.8 percent, well surpassing California’s 13.3 percent top bracket. That means New York City is now the least tax-friendly place in the nation for millionaires to locate.

And New York State’s share of millionaires was declining even prior to the April hikes.

As Empire Center’s E.J. McMahon recently pointed out, as of 2019, “New York’s share of the nation’s total millionaire earner population dropped to 9.9 percent, down from 12.7 percent as of 2010, the year after the state enacted a supposedly temporary and ultimately permanent higher rate on millionaire earners.”iii

How many more top earners New York loses due to last year’s tax hikes we can’t yet know.  Adopted less than a year ago, the increases were made retroactive to the start of 2021, making the initial hit tough to avoid.

And permanent moves don’t necessarily happen overnight. They can take months or years to plan, prior to packing bags and saying goodbye to friends.

Another reason to fear the future impact of the rate hikes is that so many of New York’s top earners already have at least one foot out of the Empire State. The Comptroller included a breakdown in his review of last year’s enacted budget showing that the majority of those impacted by the new hikes are either part-year residents or nonresidents.iv

These individuals pay New York income tax on their state-sourced revenue, but not on their other income, including capital gains. Those living in income-tax free Florida, for instance, could lower their tax bill much further if they can manage to source their income to the Sunshine State, which is not coincidentally trying to attract more financial services firms to headquarter there.

The financial services industry accounted for 18 percent of New York’s entire tax revenue in state fiscal year 2021. Those working in finance in New York City earn more than $400,000 on average and account for many of the state’s millionaires. But Wall Street’s share of the industry’s jobs is declining.v Financial services professionals are among the most mobile in the entire workforce since their jobs tend to be so conducive to remote work. Under existing incentives, the risk of further tax-induced flight seems quite high.

As noted, the top one percent of earners in New York were contributing more than 40 percent of income taxes prior to the April hikes that targeted them alone. The PIT itself is expected to rise as a share of state revenue from 43 percent in 2011 all the way to 55 percent in 2025. That means increasing reliance by the state going forward on an inherently unstable revenue source consisting largely of bonuses and capital gains that can fluctuate wildly based on market movements and other industry-specific variables.

That means windfall revenue for the state when markets are riding high, but risk of a very hard landing when markets fall.

The greater risk, of course, is that the more the state squeezes its top earners, the more likely they are to leave permanently, creating the hardest of landings for a state that relies on them to finance a large and ever-expanding public sector.

First is the acceleration by two years of an already-scheduled phase-in of middle-bracket tax rate reductions originally enacted in 2016. Broad-based tax reductions are laudable, but the budget proposal is itself merely cosmetic. Relative to current law, tax rates in these brackets will briefly (for two years) dip slightly (less than ¼ of a percentage point). The revenue relief will total no more than a few hundred dollars per family, while it briefly lasts.vi Adjusting the state tax brackets for inflation would provide more lasting relief to middle class taxpayers anxious about the future.

The Governor’s most expansive “tax” relief, a $2.2 billion property tax rebate, is not really a tax proposal at all. Homeowners making less than $250,000 will get a check mailed to them, under the guise of a tax “rebate.”

We certainly believe that taxpayers in the state should be permitted to keep more of what they earn.

But issuing arbitrary rebates on a political whim is the worst kind of tax policy. The checks won’t encourage people to remain property owners in New York, or to move here. One-shot rebates won’t alter expectations about the property tax burden going forward. No one is going to buy a house or stay in one in the hopes that this Governor or the next one is going to deign to send them another check.

New Yorkers need tax rates that are reasonable, reliable, and predictable. That’s the best way to allow people to plan for the future and make informed decisions in the best interests of themselves and their families. In the long run, it’s the best hope for the state.