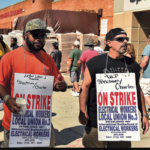 A bill passed by the state Senate last week could shift millions of dollars in costs from labor unions to the state’s unemployment insurance (UI) program while making employers indirectly subsidize union strikes.

Unlike nearly all other states, New York lets striking workers collect unemployment insurance (UI). However, while other workers who lose their jobs need wait only one week before collecting UI benefits, striking union members cannot collect until they’ve been off the job for a total of eight weeks.

Legislation (S4573/A6592) sponsored by Senator Tim Kennedy (D-Buffalo) and Assemblyman Sean Ryan (D-Buffalo) would let striking workers collect benefits a week after the start of a walkout. The bill passed the state Senate last week 48-14, with seven of the chamber’s Republican members siding with the Democrats. The measure is awaiting a vote in the Assembly Labor committee.

Since its inception during the Great Depression of the 1930s, the fundamental purpose of the joint federal-state unemployment insurance program has been to provide benefits to “eligible workers who become unemployed through no fault of their own,” as the U.S. Labor Department puts it. Striking union workers, by contrast, have always been treated differently because they choose to stop working as a lawful labor bargaining tactic.

So what’s the justification for changing New York’s law to treat strikers the same as laid off workers? The bill memo filed by Kennedy and Ryan offers a few sentences of straightforward advocacy that could have been written in AFL-CIO headquarters:

Requiring workers on strike to wait seven weeks before they are eligible to claim UI benefits places an undue financial hardship on workers exercising their legally guaranteed rights to organize, bargain collectively, and strike. By aligning the amount of time that a UI benefits claimant on strike must wait with the waiting period applicable to other claimants, the financial hardship experienced by striking workers will be lessened.

In other words, unions will have less of a disincentive to strike.

The bill would not apply to state and local government employees covered by the Taylor Law, which prohibits strikes under a 1973 Court of Appeals ruling, but public services could still be affected.

A broader view of private-sector work stoppages suggests that the time-delayed flow of UI payments has increased strikers’ incentives to return to work, and paying them sooner could prolong strikes. Looking at the 23 NY-centric major work stoppages (those occurring solely in New York and involving more than 1,000 workers) since 1997, only one (a 102-day strike in 2005 by the International Union of Elevator Constructors) lasted long enough for strikers to begin collecting.

The UI benefit expansion would also be a big financial favor to the unions themselves, which are now often obligated to provide “strike pay” to their members. (The United Auto Workers, for instance, pays each striker $250 per week.) Unions relieved of their strike-pay obligation could use the savings for other purposes—including campaign contributions. The resulting rise in unemployment insurance premiums would fall on employers.

The law would make New York even more of an outlier in terms of extending special privileges to labor unions. New Jersey extended UI benefits to strikers last year, but still makes them wait 30 days longer than beneficiaries who are involuntarily without a job, and case law in Vermont gives benefits to strikers in certain circumstances.

P.S. Unemployment benefits paid out to displaced Long Island Railroad and Metro-North employees are governed by the federal Railroad Unemployment Insurance Act, not state law. Unlike New York UI benefits, they are paid to strikers after two weeks but are capped at $361 per week.