A huge majority of New York City residents believe it’s likely the non-Indian gambling casinos authorized by Proposal One on next week’s ballot will bring in “significant new revenue for New York state and local governments”—including a full one-third who think it’s “very likely” that casinos will be a big money maker, according to a New York Times-Siena poll released today.

Apparently, they’ve accepted at face value the spin embedded in the ballot proposition language, which says the casino expansion will achieve the purpose of “promoting job growth, increasing aid to schools, and permitting local governments to lower property taxes.”

But if that’s really what New Yorkers expect, they’re in for a rude awakening. Yes, a few more casinos will create some jobs and generate some added revenues. But in a statewide context, the projected fiscal and economic impacts of new casinos won’t be “significant” by any stretch of the imagination. The jobs will be relatively few, the new school aid will be minimal and the impact on property taxes in most of the state will be almost imperceptible.

Moreover, experience in other states indicates that, once new gambling facilities come on line, the revenues they generate won’t grow much.

Let’s consider the claims one at a time …

NY Jobs Now, the labor-business coalition campaigning for a “yes” vote on Proposal One, says passage of the amendment will lead to the creation of “more than 10,000 new, permanent jobs for New Yorkers.” It’s not clear whether the estimate relates to the initial four upstate casinos authorized by the Proposal One enabling statute, or the seven that can be in operation once the New York City region is opened to full-blown casinos after seven years.

The state Gaming Commission has estimated that the four upstate casinos alone will create 9,600 jobs, including 6,700 temporary construction jobs and just 2,900 net additional permanent positions. Even the higher figure of 10,000 would boost total upstate private-sector employment by only 0.4 percent.

The Gaming Commission jobs estimate is attributed to a REMI model that also cites a 30 percent “displacement” effect, which suggests that new upstate casinos are actually expected to destroy 1,200 existing jobs while creating 4,100 new ones. Added indirect employment gains from casinos will depend heavily on the extent to which they attract customers from outside the areas in which they are located. But how many people are likely to flock to a “world-class destination gaming resort” in, say, Tioga?

Governor Cuomo and other casino expansion backers have asserted that the new jobs will be “good paying,” without quantifying that phrase (much less explaining what “good paying” has to do with good grammar).

It’s worth noting that, in the wake of a favorable arbitration ruling doubling their pay, the 1,375 unionized workers at the Resorts World Casino in Queens (”highest-grossing slot machine parlor in the country”) will now earn an average of $40,000. Tips could boost the total for some, but it seems safe to predict that upstate casinos won’t replicate the $57,000 average wage for upstate manufacturing jobs.

By way of further comparison, the state has projected that under an “average development scenario,” regulations clearing the way for high-volume hydraulic fracturing operations in upstate New York would result in the direct creation of 17,634 construction jobs and 7,161 production jobs, indirectly promoting creation of more than 29,000 jobs in other sectors.  If Pennsylvania’s experience is any guide, the average fracking job in New York would pay about $62,000—assuming they are ever created, that is.

Of course, what matters to the labor unions bankrolling the pro-amendment campaign is not the number of jobs casinos actually will create, but the fact that the Proposal One enabling statute effectively requires that they be union jobs. Organized labor now essentially subsists on state-mandated unionization of work linked to government contracts or government licenses.

The Division of the Budget (DOB) has estimated that, when fully operational, the Upstate New York Gaming and Economic Development Act, enabling statute for Proposal One, will generate $238 million in new revenues for state aid to K-12 education. That would add just a sliver to the state school aid pie—the equivalent of 1 percent of current revenues supporting education—as illustrated below.

But even this figure is deceptive, because the Gaming Act also authorized up to 1,000 electronic slot machines each at facilities run by the Nassau County and Suffolk County Off-Track Betting Corporations (OTBs), which DOB expects to generate over $100 million. The net school aid gain from the new upstate casinos in isolation will be less than $200 million, assuming only one-third of the new revenue from OTB slots (which will go forward with or without Prop One approval) is effectively diverted from Resorts World.

Including all the additional school aid cited by DOB, total added local revenues from casinos will equate to 1.2 percent of total property tax revenues outside New York City as of 2011, based on a combination of DOB estimates and the state Comptroller’s latest data for property taxes collected by all levels of government. On a regional basis, the impact will range from a low of 0.6 percent of property taxes in Long Island and the Catskills/Hudson Valley to 2.4 percent in Central New York/Mohawk Valley. A regional and county-by-county breakdown can be downloaded here.

In the best-case scenario, casinos will make it easier for most local governments and school districts to hold their increases in property tax levies below the state’s 2 percent tax levy cap–for a single year.

The biggest revenue boost from expanded gambling in New York has already occurred, in the form of $880 million in revenues generated by electronic slots, also known as video lottery terminals or VLTs, at nine racinos first authorized  by the state 10 years ago. Seventy percent of this money comes from two downstate facilities: Resorts World, adjacent to Aqueduct Racetrack, and Empire City at Yonkers Raceway. Meanwhile, receipts from traditional Lottery games have barely risen over the past decade, as shown below. 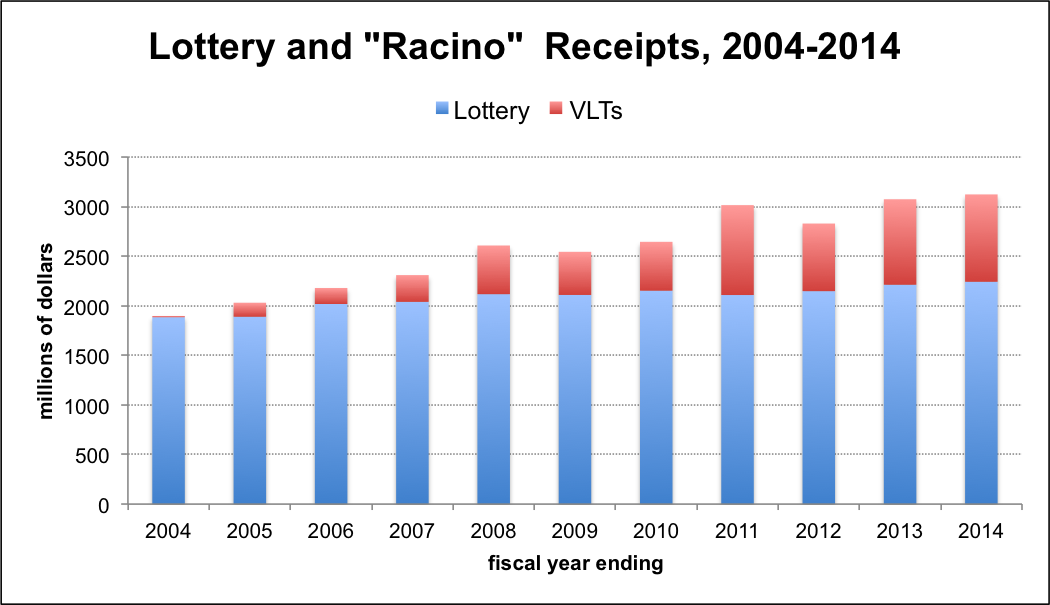 Whatever else can be said of casinos—and there are plenty of negatives—Proposal One clearly will not be an economic or fiscal game-changer for the state as a whole, or even for upstate New York alone. Outside the immediate “host communities” of new casinos, the vast majority of New Yorkers will experience no improvement in their personal economic prospects and little if any difference in their property taxes or school funding, in the short or long term.