The official 2020 U.S. Census headcount of New York State’s population—topping 20 million for the first time—is significantly larger than previous estimates. While the news headlines from yesterday’s Census Bureau release focused on the Empire State’s narrow loss of one congressional seat, the census count also has potentially more significant implications for the political balance of power and influence within the state.

The official decennial census count also exceeded the 2019 estimate by 762,190 people, a difference of 3.9 percent. In percentage terms, the only state with a bigger change from its 2019 estimate was New Jersey, whose 2020 census population count was 4.6 percent higher than its estimate for a year earlier.

In the years between each decennial census—i.e., years not ending in a zero—the annual estimates of state and local populations as of July 1 are compiled from components including public records of births, and deaths, Medicare enrollments of those 65 and older, and taxpayer migration as tracked by the Internal Revenue Service. The constitutionally mandated national census every ten years is based on a more thorough (but not complete) headcount as of April 1.

The sharp difference between the 2020 Census count and the estimated trend for New York is illustrated below. 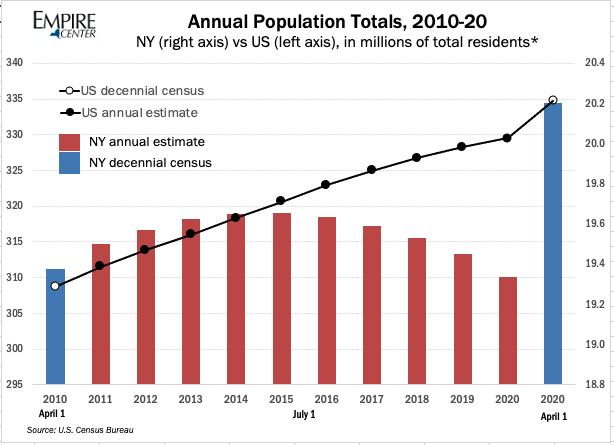 Where are all those people?

These factors don’t explain the trends in all immigrant-intensive states, however. For example, the difference between Census estimates and the 2020 official Census in California, Florida and Texas were tiny at 0.2 percent, 0.4 percent and 0.6 percent respectively. New Jersey, on the other hand, had the largest percentage difference between its 2019 estimate and 2020 census count: 4.6 percent.

Such differences—much larger census counts than previous estimates in New York and New Jersey, but little difference at all in other large and well established immigrant-portal states—suggest local factors played a larger role in boosting the 2020 count here.

A final, huge factor was the coronavirus pandemic. Broad lockdowns and shelter-in-place orders took effect in late March, just as millions of residents were filling out their census forms. At the end of March, hundreds of thousands of students at New York colleges and universities left their dorms and off-campus apartments and returned to their homes. For many resident students at SUNY and private college campuses upstate, “home” is downstate, or elsewhere in the northeast.

The decennial census normally includes resident undergraduate and graduate students in the towns and cities where they live during the school year; and the Census Bureau’s estimates and decennial counts are aided enormously by access to college resident student rosters, room counts and off-campus landlord registers.

But, as noted, by the end of March 2020, dorms and rented apartments in college towns and cities across New York State had nearly emptied. How many of their previous occupants were nonetheless counted by the census as on- and off-campus student residents, and how many were included on their parents census forms at home in, say, Long Island and New York City?

We’ll have a better idea of the answer to that question when block-level census data are released to government and private researchers in August.

In the meantime, without even considering the pandemic factor, it seems a safe guess that most of the 762,190 people not included in the last census estimate will turn up as residents of New York City and its inner suburbs.

If that’s the case, the census data will translate into a net shift of  up to four Assembly seats and up to two state Senate seat to the downstate region (defined as the 12-county metropolitan commuter transportation district including New York City, Long Island and five counties of the lower Hudson Valley).  Currently, 22 out of 63 Senate districts are upstate, including one (S.D. 42) located partially in downstate Orange County; and 50 of 150 Assembly districts are upstate, also including one (A.D. 100) partially in Orange County.

P.S. — As it happens, next Tuesday, May 4, is the scheduled release date for annual Census Bureau population estimates for states and counties as of July 1, 2020, including components of change such as births and deaths, and domestic and foreign migration. The data will remain interesting for purposes of tracking likely trends but will need to be taken with an enormous grain of salt, since the total estimated state population as of July 1, 2020, will not reflect the 2020 census result, and thus is likely to be much lower than the 2020 census figure.

P.P.S. — One reader, Bill Mahoney of Politico’s Albany bureau, immediately pointed to another possible explanation for the estimate-decennial census disparity: perhaps the 2010 census was actually a big undercount of New Yorkers, in which case the subsequent annual estimates would have been made off a base that was too low to begin with.  (Then again, if that’s was the case, it would also suggest the net change in state population since 2010 was actually small, and that much larger gains occurred between 2000 and 2010, although Great Recession would have squelched that in the last third of the decade.)

This blog post was revised to reflect an updated estimate of the possible shift in legislative seats from upstate to downstate, assuming the state’s population growth since 2010 occurred entirely in the downstate region.