For decades, “Kill Urstadt!” was the rallying cry of New York City tenant activists and their political allies favoring more stringent rent control. The slogan referred to chapter 372 of the Laws of 1971, better known as the Urstadt Law, through which Albany barred the city from adopting rent limitations “more stringent or restrictive than those presently in effect.”

If those two changes had marked the extent of his impact on public policy, Urstadt would have been among the more consequential state officials in New York’s history. Beyond that, however, he also was instrumental in creating the state Urban Development Corp. and Battery Park City, the planned community on the western side of Manhattan’s southern tip, built starting in 1980 on 92 acres of landfill that had been dredged up from construction of the Verrazano Narrows Bridge and the original World Trade Center.

Urstadt, who died at his Bronxville home this week at 92, was lastingly proud of the rent deregulation policies that made his surname an epithet in some quarters—and bemused to have been targeted by calls for his (figurative) demise. As he put it in a 2014 interview:

“I can’t tell you how many State Assembly members and city politicians have come up to me over the years to say, “Thank you.” They don’t want to be responsible for what happens when taxes, water and electricity go up, but the rent doesn’t—and then the buildings go into foreclosure. Secretly, they’re happy with the law, but many of them are getting votes for being unhappy.

The tenant activists never managed to “kill” Urstadt, but last year they successfully lobbied Governor Cuomo and the Legislature to do the next worst thing: making permanent the city’s temporary “rent emergency” law, ending vacancy decontrol of higher-priced apartments, and extending the rent reg option to communities across New York. No one can say Urstadt, among others, didn’t warn about the inevitable long-term consequences: less housing investment, and ultimately less of the quality affordable housing the advocates say they want.

After leaving his government service in 1979, Urstadt returned to private real estate businesses, which (his obit notes) “included ownership of the residential firm of Douglas L. Elliman Co. and the commercial brokerage Pearce, Urstadt, Mayer & Greer. He was named CEO of Hubbard Real Estate Investment Trust in 1989 and redirected the company to focus on investing in neighborhood community shopping centers in the suburban New York region. The company was later renamed Urstadt Biddle Properties and currently owns 82 properties containing approximately 5.3 million square feet of space.”

Charles Urstadt also was an early and enthusiastic supporter of the Empire Center—boosting our fledgling non-profit with both annual checks and regular infusions of upbeat encouragement. (His vigorously cheerful personality might be seen as a testament to the benefits of exercise; the former Dartmouth swim team captain was still competing and setting world age-group records in his 80s.)

Deregulating rents and restoring a bountiful free market to multi-family housing was just one of Charles Urstadt’s good ideas. Another—still out there for the taking—had to do with Battery Park City. For most of the past 20 years, Urstadt repeatedly and publicly urged the city government to take a step that would have resulted in the instant elimination of the patronage-rich Authority, whose board he chaired as recently as 2010.

In a 2009 New York Times op-ed, Urstadt and former Battery Park City public information director Avrum Hyman pointed out that a little-noticed provision of the 1979 agreement creating Battery Park City gave New York City the option of taking the title of the entire development for just $1.

With just $1, the city would reacquire the land; the authority would no longer control Battery Park City; and the development would become a neighborhood the same as almost any other in Manhattan. Its income would be New York City’s, solely.

The city would, of course, be obligated to assume the $1.1 billion in bonds issued by the authority. But these bonds could be satisfied by the sale of the income from the commercial leases at Battery Park City. The revenue from that sale would total at least $2 billion, leaving plenty left over after the bonds had been taken care of.

Here we come to another budgetary truth. The authority’s current operating expenses are approximately $30 million a year, even though the development has been virtually completed and the city already provides all police, fire, educational and sanitation services. Driving up the operating expenses of the authority even more are the ever-growing health insurance and pension contributions for a staff that is far larger than the authority requires.

Still a visionary well into his 80s, Urstadt also called for landfilling Battery Park City’s vacant South Cove, something he estimated could be done for $20 million. The new land area, he and Hyman wrote, “could be used for an iconic 2-million-square-foot building that would both mark the entrance to New York Harbor and net the city what we estimate would be $480 million in land value and $20 million per year in additional payments in lieu of taxes.”

These ideas have obvious appeal. Maybe someday the city will have a mayor who actually gets it. In the meantime, someone ought to get around to at least naming a street after a man who never stopped trying to think up ways to unleash what he saw as New York’s still-unfulfilled potential. 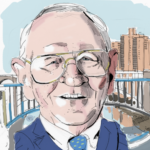