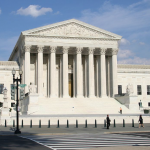 The case focuses on a provision of the Illinois collective bargaining law requiring state and local employers to collect “agency fees” in lieu of union dues from public employees who are covered by union contracts but have chosen not to join as members. New York’s law has a very similar provision, Civil Service Law section 208(3)b, which says recognized unions “shall be entitled” to have agency fees collected from paychecks on their behalf.

The plaintiff in the case, Mark Janus, argues that paying an agency fee to the American Federation of State, County and Municipal Employees (AFSCME) constitutes “compelled speech” and thus violates his First Amendment rights.

Lower courts have previously upheld the constitutionality of compulsory fee collection based on a 1977 Supreme Court ruling in Abood v. Detroit Board of Education. There the court held that agency fees could be collected as long as workers had a choice to have the “ideological” component used for political activity rebated to them (though unions, particularly AFSCME, have made that rebate process notoriously complicated to discourage people from attempting it).

In recent cases, however, the court has signalled it would revisit Abood: a pair of narrow rulings in 2008 (Knox) and 2014 (Harris) took issue with the Abood court’s handling of the differences between how First Amendment objections should be treated in the private and public sector. Public-sector unions, Janus argues, use every dollar to influence government in one form or another.

A similar challenge had been brought by a group of California teachers challenging that state’s statute. The court deadlocked in that case, Friedrichs vs. California Teachers Association, after the death of Justice Antonin Scalia, leaving the lower court’s ruling in place. For Janus, Justice Neil Gorsuch represents the swing vote, as the other eight justices had previously ruled on a similar if not identical challenge in Friedrichs.

New York public employees covered by union contracts have for decades been presented with a one-way-or-another option when hired: pay dues to the union and receive certain member perks, or pay agency fees of similar or equal value. If government unions are suddenly unable to present new hires with that ultimatum, it is less likely they will sign up. What’s more, workers who have already signed union membership cards will have a choice about continuing to pay dues, which can exceed $1,000 a year.

Data suggesting how many of New York’s more than 1 million unionized government workers would exercise newfound “Janus rights” is scant. After a judge stopped the MTA from withholding dues and fees automatically from Transit Worker Union Local 100’s membership after its illegal 2005 strike, more than half of employees stopped paying.

Some unions, such as the New York State United Teachers, are already under financial stress due to their internal spending practices, and federal disclosure data suggests NYSUT’s largest local, the United Federation of Teachers, “has at least a temporary cash flow problem.”

New York unions have attempted to dull the potential impact of the Janus ruling by lobbying to abolish a decades-old worker protection that lets employees stop dues withholding by notifying their employer directly, and would let the unions impose terms setting narrow time periods for opting out, among other things. The measure passed the state Assembly but did not come to a vote in the state Senate.

Ken Girardin is the Empire Center’s Policy Analyst, performing detailed analysis of data and public policy in support of the Center’s research work.