In his push for massive (additional) federal aid to deal with the economic fallout of the coronavirus shutdown, Cuomo repeatedly has claimed New York has “a $13 billion deficit.”

Recently he’s been upping the ante. At his briefing in Watertown yesterday, the governor spoke of a “61 billion gap,” and later answered a reporter’s question with the flat assertion that “we have a $61 billion deficit.”

As he’s managed to clarify a few times, Cuomo’s $13 billion figure—sometimes given more specifically as $13.3 billion—is the difference between his revenue projection in January and his latest forecast, adjusted to reflect the impact of the economic crash.

But by any standard definition, a “deficit” compares current revenue projections to current expenditure projections. By that measure, the Enacted Financial Plan released by Cuomo’s budget staff on April 25 estimates the state is $10 billion short of what it needs to balance the FY 2021 budget adopted by the Legislature last month (which, in fact, slightly increased spending).

Even that $10 billion figure is somewhat inflated. Subtract $1.4 billion in deferred payments to the federal government for employee payroll taxes, and add Cuomo’s planned $1 billion cut in state agency spending, and that would leave the governor needing to find another $8 billion in savings in the local aid category—still a tall order.

However, as noted in state Comptroller Thomas DiNapoli’s analysis of the enacted budget, Cuomo’s financial plan uses only a small sliver of the $5.1 billion sent to the state via the Coronavirus Relief Fund (CRF) provision of in the last federal stimulus bill (the CARES Act).

DiNapoli’s report points out that the latest guidance memo from the federal Treasury Department on how CRF funds can be spent, released last week to little notice, “may allow the State to use most or all of its $5.1 billion allotment, although specific estimates are not yet possible in part because of limitations in the Treasury materials.” For example, DiNapoli’s report says, the CRF language could be interpreted to allow the state to cover $2.2 billion in correctional services and probation spending, $750 million in state police payroll costs, and $313 million in general health-care spending. Tapping CRF money for those three categories alone could reduce the real deficit to less than $7 billion.

So where does the $61 billion figure come from? Cuomo rarely clarifies it, but the number is calculated by subtracting DOB’s updated all funds tax revenue projections for FY 2021 through 2024 from the original, far more optimistic forecast in Cuomo’s Executive Budget for the same period.

In other words, $61 billion is a cumulative four-year number. Of course, the state doesn’t actually enact or balance budgets in four-year chunks. Cuomo might as well have conjured a 10-year figure and claimed, say, a quarter-trillion dollar budget gap, for all the relevance it would have to the current situation.

By the way, Cuomo’s multi-year budget gap projection is further inflated by assuming that, from FY 2022 through FY 2024, state spending will increase by an average of four percent a year—double his self-imposed spending cap.

In reality, whatever aid Cuomo gets from the feds will be a stopgap—a bridge to nowhere, unless he gets busy reducing spending to the levels that can be supported in a severe recession. The alternative is to raise taxes—a step made much more risky in the wake of the new federal Tax Cuts and Jobs Act (TCJA) of 2017, which capped state and local tax (SALT) deductions at $10,000.

And speaking of SALT, Cuomo inflated another balloon yesterday when he claimed that the cap on state and local tax deductions “cost New York State $29 billion.” This wasn’t an offhand slip of the tongue; the number was even included in one of his slides. 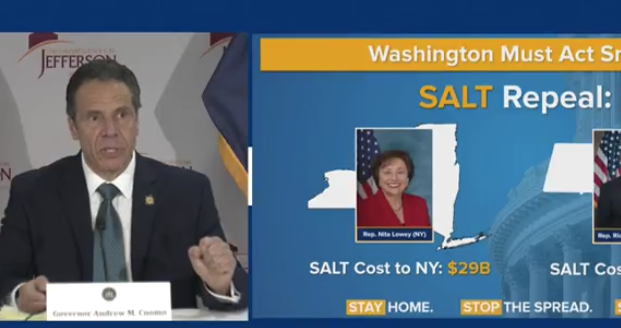 As explained here, the governor has been distorting and exaggerating the impact of the SALT cap almost from the moment the TCJA passed in late 2017. But the $29 billion figure is a further inflation—more than double the added cost Cuomo previously claimed the bill had imposed on New Yorkers.

So where does $29 billion come from? It’s the difference between the amount of total federal taxes generated by New York residents and the amount of federal aid flowing back into New York. This is wildly misleading, even by the governor’s fast-and-loose standards.

As expected, House Democrats under Speaker Nancy Pelosi have introduced and are expected to pass a massive new stimulus bill that would give the state alone $34 billion—enough to cover all of his projected budget gaps for three years—while also setting aside more than $33 billion for New York City and other local governments. It also temporarily repealed the SALT cap.

This was pure political posturing, however. The next stimulus bill will require a deal between Pelosi and Senate Leader Mitch McConnell, whose members reportedly are increasingly resistant to doing a big aid package for states and have said that any subsequent stimulus package is unlikely until after Memorial Day. Assuming the two leaders can agree to a bill President Trump will sign, the resulting measure is likely to hand New York much, much less than the House version—although quite possibly still enough to help Cuomo avoid local aid cuts in the current fiscal year.

In any case, expect Cuomo to complain the aid is not nearly enough—and as part of the expectations game, to continue blowing balloons.