The Cuomo administration has gotten around to sharing detailed estimates of the pandemic’s impact on the state budget enacted almost a month ago—but the latest update from the Division of the Budget (DOB) raises about as many questions as it answers.

According to DOB’s FY 2021 Enacted Budget Financial Plan, the broad “New York State on PAUSE” economic shutdown imposed by the governor to contain the spread of the coronavirus also has caused state government’s budget resources to collapse on an unprecedented scale.

The updated financial plan indicates that roughly $10 billion in cuts from the enacted level of expenditures—or about $7.3 billion (7.1 percent) in reductions from last year’s actual spending total—will be necessary to balance the budget in the absence of any additional federal aid. Details of those cuts are to be unveiled by Budget Director Robert Mujica sometime in May, after the April “measurement period” created by budget language temporarily expanding the governor’s temporary authority to adjust local assistance as well as state agency spending.

Our analysis of the update focuses on several key areas:

The updated plan summarizes what it describes as a “bleak” economic outlook. DOB said an assessment it commissioned from Boston Consulting Group pointed to “a downturn that is deeper—and a recovery that takes longer—than the Great Recession (of 2007-09) and the recession that followed the terrorist attacks of Sept. 11, 2001.”

Key elements of the DOB forecast:

As expected, the report details what Governor Cuomo has described as a $13.3 billion decrease in state revenues from the levels he had projected in February, just before the coronavirus crisis hit. The following table breaks down the decline by major category.

As shown, the biggest drop was in personal income tax (PIT), the state’s single largest state revenue source. PIT receipts now are expected to fall $4.6 billion (8.6 percent) from FY 2020 levels, and $7.8 billion (13.7 percent) from the optimistic Executive Budget forecast in January. But in percentage terms, the biggest decreases are in two areas affected by the suspension of normal retail activity: lottery sales revenues, normally stable but now pointing down almost 20 percent from last year’s level, and sales taxes, expected to drop almost 16 percent from last year and nearly 20 percent from the Executive Budget forecast.

The Financial Plan report stresses (on page 8) that the fall in receipts “is not a one-year problem.” Based on the DOB and Boston Consulting Group economic forecast, all funds tax receipts in fiscal 2021 are not expected to recover to 2020 levels until FY 2024, which begins three years from now: 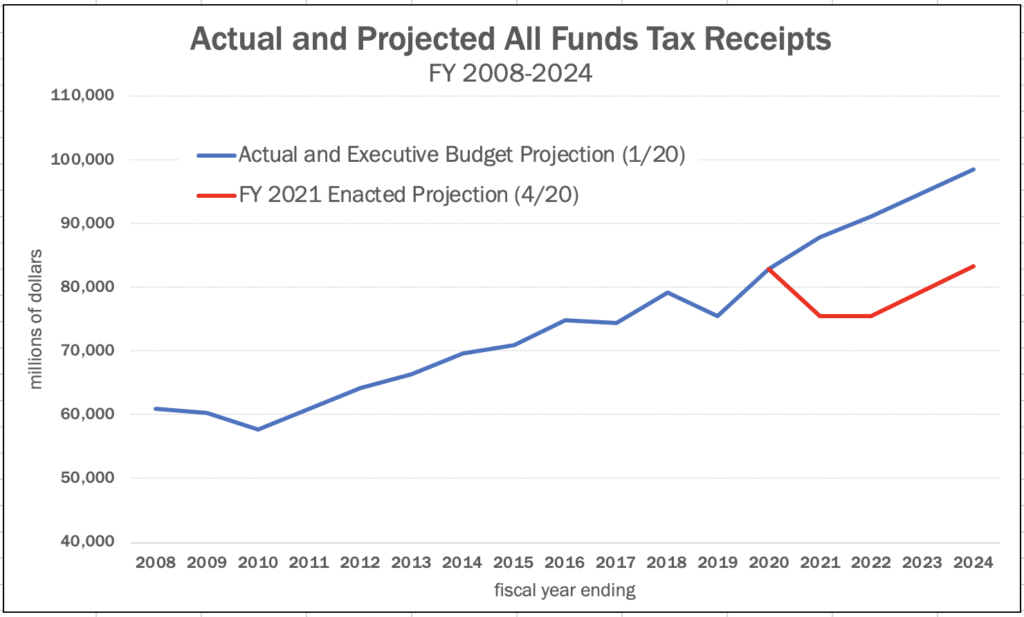 The financial plan reflects an enacted FY 2021 budget little changed from what Cuomo had proposed for the fiscal year that began April 1. As explained here, that budget was essentially a placeholder, “shakily ‘balanced’ on hopes of a huge federal bailout and ultimately backstopped by the potential for unprecedented deficit borrowing.”

The $10 billion in threatened spending cuts “include an assumption of $8 billion in reductions to spending classified as “local assistance”—half of which is school aid and Medicaid expenditures— and just under $1 billion in reductions to state agency spending and the budgets of the attorney general and state comptroller. In wording calculated to get attention in Washington, the financial plan includes this description of the implications of such cuts:

The scope and depth of the reductions to local aid programs needed to balance the FY 2021 Budget have no precedent in modern times. In the absence of Federal aid, nearly every activity funded by state government in the aid to localities budget — from special education to children’s health insurance to residential services for vulnerable populations to substance abuse programs to school property tax relief to direct aid to localities to operating aid to mass transit to higher education – will face steep cuts. Any of these reductions can be mitigated during the fiscal year if additional Federal aid is made available or revenues perform better than forecast.

Using the FY 2020 budget as the baseline, spending will need to be reduced by $7.3 billion, or 7.1 percent. That’s a large enough amount in its own right — “the largest annual decline in spending since the Great Depression,” the financial plan update points out.

However, the report also disclosed the state has received $5.1 billion from the Coronavirus Relief Fund in the $2 trillion “CARES Act” stimulus bill passed by Congress last month. It expects to tap that funding for at least $650 million to reimburse expenditures already made “to build out hospital facilities, secure critical equipment, and fund other pandemic response activities.”

The state also intends to draw on the relief fund for an unspecified added amount to cover interest expenses for $4.5 billion in planned short-term “liquidity financing” to cover the slowdown in cash flow caused by the federal government’s move of the income tax filing date from April 15 to July 15. If Congress removes restrictions on how the money can be spent, it could reduce needed cuts to much more manageable levels.

So far, however, Cuomo’s focus in discussing the budget situation and his plea for more federal aid has seemed to focus entirely on the current fiscal year. But the DOB financial plan update, consistent with the economic and revenue forecast, points to a very severe multi-year problem even if spending is cut.

The state operating funds financial plan table on page 71 of the DOB update indicates that if the feds fail to deliver any more aid to New York, and if Cuomo goes ahead with plans to cut spending by an assumed recurring $10 billion this year, the state’s out-year budget gaps will grow to very high levels — $7.4 billion in FY 2022, rising to $9.3 billion in FY 2023, and then $8.8 billion in FY 2024. If Cuomo does get his $10 billion, and if no recurring spending cuts are made this year, those out-year budget gaps will each be up to $10 billion higher —the biggest budget shortfalls the state has ever faced.

The gap forecasts are illustrated in this chart: 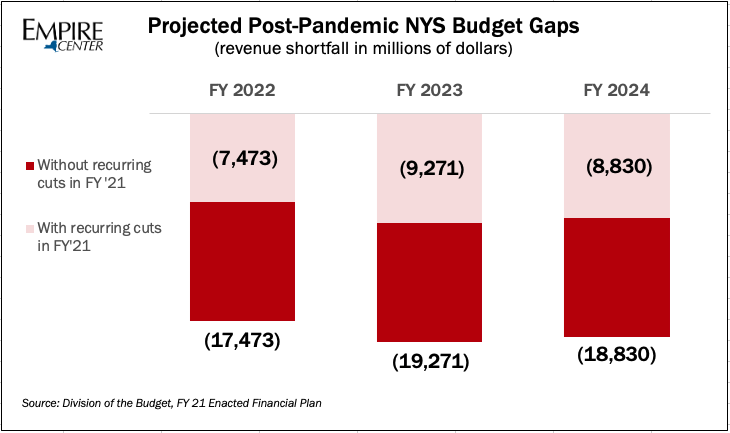 As always, projected budget shortfalls aren’t just a matter of available revenues but of projected spending. And as shown below, the spending trendlines also rise to unsupportable levels over the next three years—beginning sooner if cuts are not made this year. 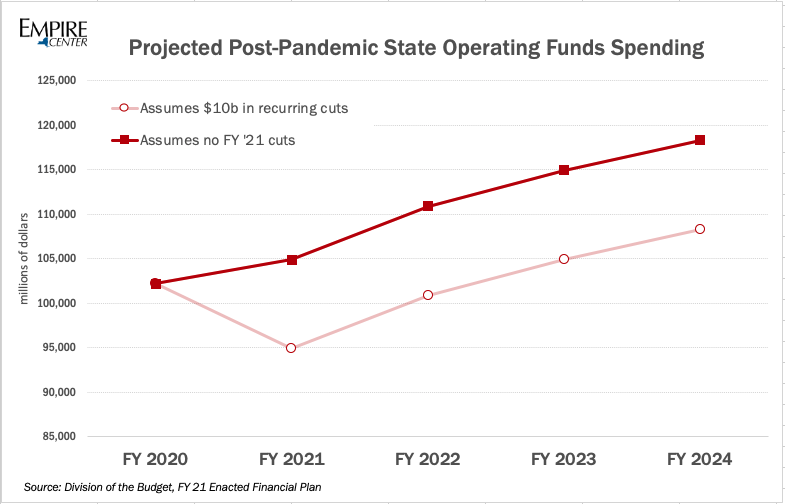 Either way, it is clear that FY 2021 will be just the start of a rolling multi-year fiscal crisis in Albany. Assuming the feds don’t deliver a massive multi-year infusion of aid to New York among all states—and given the ballooning federal debt, that would appear unlikely even under a future Democratic Congress and White House—the New York State budget cannot possibly be restored to recurring structural balance without spending cuts. The longer it takes before cuts are commenced, the bigger the negative impact they will have.

As with the rest of the financial plan, the Medicaid section is a kind of time capsule: It mostly shows what Medicaid spending would have looked like if not for the disruptive effects of the pandemic, which have not yet been factored in.

What they show is that Cuomo’s attempts to rein in Medicaid have only modestly slowed its pre-coronavirus growth rate, if at all.

In spite of the cost-cutting efforts of his Medicaid Redesign Team – and in spite of the perception that he was “slashing” health care – overall Medicaid spending is still on track to increase substantially in the coming fiscal year.

The plan shows the state share of Medicaid dropping by 6 percent, or $1.5 billion. But that’s more than offset by an increase in federal funding of almost $5 billion, or 12 percent. About one-quarter of that bump is extra aid from one of Washington’s coronavirus relief packages. The rest is standard federal matching funds.

Oddly, the matching funds number is $4.4 billion higher than it was in the Budget Division’s February financial plan. It’s unclear what led to the higher estimate.

The plan confirms that the state delayed certain Medicaid payments from the end of March into the next fiscal year, a maneuver it has used to remain in superficial compliance with its own cap on Medicaid spending. It says the state share of the deferral was $1 billion–which is consistent with the comptroller’s previous report that the total deferral, including federal aid, was $2.3 billion.

The state has also notified health plans that it will be delaying further payments over the next three months to avoid a cash-flow crunch–but that goes unmentioned in this document.

The report acknowledges that Medicaid expenses could surge in the year ahead–if, for example, enrollment spikes because New Yorkers are losing their jobs and their employer-sponsored health coverage. The program could also face a burst of claims for coronavirus-related treatment.

On the other hand, Cuomo could use his emergency budget-balancing powers to reduce Medicaid fees or otherwise cut costs. Some of the state’s $5.1 billion in federal coronavirus relief aid could be used for crisis-related health-care costs, which would ease pressure on Medicaid.

None of these likelihoods is accounted for in the financial plan released Saturday. Instead, its financial tables literally say “tbd” (short for “to be determined”) in the places where crucial judgment calls have yet to be made.

It’s worth remembering that New York’s Medicaid program was in unhealthy shape before the present crisis. Out-of-control spending had thrown its budget chronically out of balance in recent years, a situation made worse by questionable policy choices and stalling tactics.

This financial plan continues the pattern of putting off the moment of truth.