Public schools in New York are awfully expensive, and their costs continue to rise at a pace that taxpayers can’t afford.  So how can schools cope with a needed reduction in state aid? 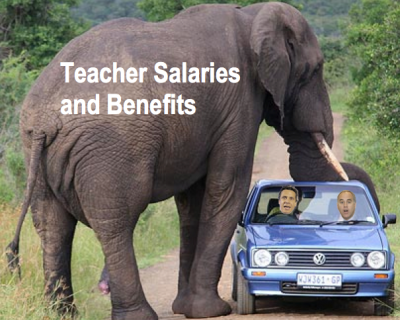 Both of these guys keep ignoring the obvious.  It’s all well and good to demand (as the governor did again today) that school districts get more efficient and crack down on administrative overhead.  By all means, they should, and must.  (The same goes for every level of government.)

But the fact remains that school spending is overwhelmingly concentrated in one big category—whose costs are more than double the combined expense of superintendents’ salaries, bus transportation, supplies, debt service and all the rest.

The unsurprising answer can be illustrated with the Census Bureau’s latest Public Elementary-Secondary Education Finance Data.  As of 2008, New York State’s K-12 spending of $17,173 per pupil (excluding capital outlays) was the highest in the country, 67 percent above average.  And out of that amount, $11,818 was spent on salaries, wages and benefits for “instruction”  — a category that excludes administration, transportation and other support services. In other words, out of every $3 spent by schools on current operations, over $2 goes to teachers.

New York’s 2010-11 median teacher salary of $73,688 is up 32 percent in the past five years, according to the state Education Department.  And according to the latest New York State School Boards Association teacher contract survey, the annual salary increase for teachers in 2010 alone ranged from 2.4 percent to 3.2 percent, depending on experience category.  Those figures do not include longevity “step” increments, which typically come to another 2 to 3 percent per year.

The savings generated by “taking advantage of multiyear planning tools, streamlining and consolidating business practices where practical, and investigating opportunities for cost savings via shared service agreements,” as the comptroller suggests in this otherwise well-researched and informative report, will only go so far.  Beyond that  — and especially in light of rising fuel costs — school districts will still desperately need to reduce the growth in teacher compensation expenses. If pension contributions alone are likely to rise by the equivalent of 19 percentage points of salary over the next five years, as projected here, something’s got to give.

School officials have pleading for mandate relief that would give them the tools to drive a tougher bargain with their unions — starting with repeal or modification of the state Taylor Law’s Triborough amendment.  They would also benefit from a temporary freeze in teacher salary increases, which the governor and Legislature have the power to impose.  Cuomo, however, isn’t going near either idea.  Instead, he seems content to keep flogging high superintendents’ salaries, along with those hardy perennials, WF&A (waste, fraud and abuse).

** UPDATE: Right after this was posted, the Times Union’s Capitol Confidential blog reported a follow-up statement from the Governor in which Cuomo, commenting on another DiNapoli report, noted that “all but roughly 100 of the State’s 696 districts have enough reserves to cover the proposed (school aid) reduction for this year.”  Cuomo added that “this does not include any renegotiation of health benefits or salaries and it does not include rooting out waste or finding greater efficiencies.”   If the governor meant to allude to renegotiation of teacher contracts, that’s a step in the right direction.  But he’s still doing nothing that gives school districts any added leverage to really push for renegotiation.