The governor has rejected legislation that would undermine the intent of New York’s newly enacted property tax cap by allowing school districts to issue 15-year bonds to cover a portion of their rising teacher pension costs. 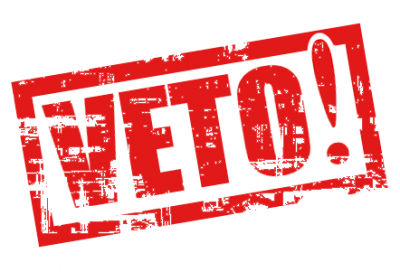 The Executive Chamber’s news release, in its entirety:

Governor Andrew M. Cuomo today vetoed a bill that would have allowed school districts to issue new borrowing to cover short term expenditures, passing the bill to future taxpayers at a much higher cost.

The bill (A.6309/S.04067-A) would have allowed school districts- without voter approval- to borrow over $1 billion through bonds to cover current pension costs. The bonds plus interest would be paid off over 15 years, forcing taxpayers in some cases to pay back significantly more than the amount originally borrowed.

“The people of the State of New York have made it clear that they will no longer tolerate the fiscal irresponsibility and reckless spending that has driven their property taxes through the roof,” Governor Cuomo said. “Families across the state have been forced to cut back and live within their means and governments and school districts must do the same. New York has no future as the tax capital of the nation and this veto sends a strong message that we will not put today’s tough decisions on tomorrow’s taxpayers.”

Governor Cuomo’s veto will protect taxpayers from the massive tax increases in the future that would be needed to cover the costs of borrowing, and ensures that the recently passed 2% property tax cap, a hallmark of the Governor’s campaign and a priority of his administration’s first year, will remain intact.

Passage of the pension bonding bill during the final two days of the legislative session had all the earmarks of a secret deal between legislative leaders and lobbyists for New York State United Teachers (NYSUT), who had drafted the measure and requested its introduction last March. After languishing in committee for three months, the bill suddenly began moving towards the floor in the Republican-controlled Senate during the final week of the legislative session.

It breezed through the Senate by a 55-7 margin on the evening of June 23, and was approved by the Assembly on the session’s final day, June 24.  But in the Assembly, at least, the vote was closer: 84-54, after a spirited 90-minute debate led by Assembly Republicans.  An override of the governor’s veto (which would seem unlikely to be even attempted) would require a 100-50 vote in the Assembly.

For a fuller take on why the bill had to be vetoed, see these earlier blog posts and this op-ed.  As explained in that article:

Districts issuing pension bonds would push a growing expense into the middle of the 2020s, gambling (with taxpayers’ money) that taxpayer-contribution rates will fall sharply in a few more years. For that to happen, however, returns on pension-fund asset will need to exceed the fund’s already optimistic 8 percent yearly target throughout the next decade.

Meanwhile, by the time their borrowed money is exhausted in 2014, districts that have borrowed to cover pension increases will have fallen even further behind in meeting their actual current pension expenses.

That is, the bonding option could easily become “a millstone rather than a life raft,” as state Assemblyman Jim Hayes (R-Amherst) put it in yesterday’s floor debate on the bill.

While the veto was expected, the governor’s action is nonetheless another sign that he is willing to get tough with one of the state’s most powerful public employee unions.