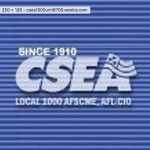 Governor Andrew Cuomo sprang his announcement of a five-year contract agreement with the state’s largest union on Tuesday afternoon—the last possible moment to win legislative approval of the deal so checks can start going out to union members. But he publicly released no details of what he was about to ask lawmakers to approve before they end their session today.

A bill codifying the contract with Local 1000 of the Civil Service Employees Association (CSEA) was hurriedly introduced overnight, but the bill language and accompanying memo clear up only part of the mystery that still surrounds key details of the proposed contract.

Here’s what we know and don’t know—and won’t know before the taxpayers are committed to forking over more dough to pay for the deal.

Key details, such as they are

Base salaries for the 60,000 CSEA-represented state employees will grow by Cuomo’s favorite all-purpose multiplier. His three-year deal last fall with the second-largest state government union, the PEF, featured annual base pay increases of 2 percent a year, which is also the maximum level of allowable growth in local property tax levies (outside New York City) under his 2012 tax cap. Two percent is also the level at which he has pledged to “cap” state spending (aided by accounting and timing gimmicks).

So the salary hikes in the CSEA contract, at least, were easy enough to guess at. Sure enough, CSEA members also will get raises of 2 percent a year—but over five years instead of PEF’s three, which compounds to 10.4 percent by fiscal 2021.

In considering the impact of base pay hikes, for starters, it’s important to keep in mind that CSEA members under current law also are entitled to receive up to seven automatic annual “step” increases as they move from the “hiring rate” to the “job rate” in each pay grade, plus annual “longevity” payments once they have worked continuously for five and ten years, respectively. Annual increases in base pay raise the number in each of the 200 steps on the 25-grade CSEA pay schedule.

On base pay alone, without even considering steps, CSEA members come out ahead of inflation in the first year of the pact, when the Budget Division says the Consumer Price Index was up 1.6 percent. Going forward, however, 2 percent is below the general consensus. DOB forecasts CPI growth of 2.2 percent in fiscal 2018, while the Congressional Budget Office is projecting an annual CPI increase averaging just below 2.4 percent in calendar years 2018 through 2021. That would translate into a compound cost-of-living increase of about 11.7 percent from fiscal 2016 through the end of the contract period, not counting annual step raises. So the CSEA’s base pay increase alone would appear to be about a point and a half below projected inflation—creating a risk for the union that inflation will be higher, and a risk for the state that inflation will be lower.

The legislation submitted by the governor also stipulates that the CSEA base pay hike will be augmented in the final two fiscal years of the contract, effective April 1, 2019, by significant increases in existing longevity payments and by a new, added longevity bonus for employees who have served continuously for at least 15 years at the job rate atop their pay grade. The resulting change in the bonus schedule is shown below. 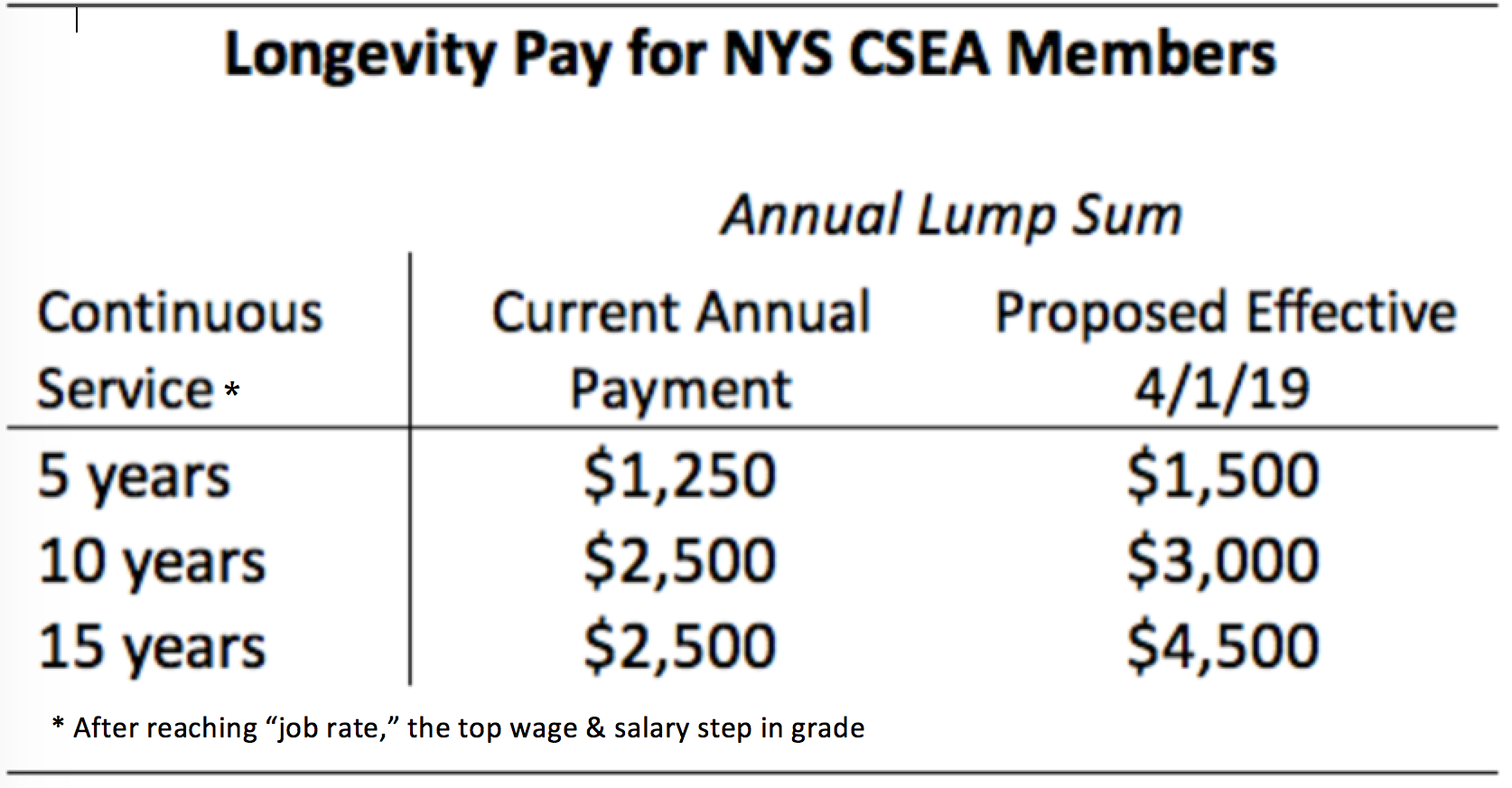 Longevity payments are collected by employees as lump sums, once a year. By law, they are considered “in addition to and not part of the employee’s basic annual salary,” but are also “included as compensation for overtime and retirement purposes.”

In other words, if you are entitled to time and a half for working overtime, it is calculated as 1.5 times your base salary plus longevity bonus. Equally important, the bonus (as compounded by overtime) is counted towards your pension. For a senior Tier 4 retirement system member, the additional $2,000 in bonus payments after 15 years in the top pay grade will translate into an added state pension of $1,200.

The bill memo estimates the pay raise will add $197 million to state operating fund expenditures over a two-year period retroactive to the expiration of the last CSEA pact on March 31, 2016 and continuing through the current (2018) state fiscal year, which ends next March 31. Each additional percentage point in base pay is roughly $33 million, for an added annual impact that will come to about $345 million by 2021. This would translate into a cumulative added cost of just over $1 billion. Through fiscal 2018, at least, the bill memo says agencies are expected to absorb the net cost of the first two years of the contract under existing appropriations, with the implication that the financial impact of the deal is already reflected in the enacted budget financial plan.

Depending on the seniority distribution of CSEA members, the longevity pay increases would appear likely to swell this number by some unknown, unreported amount—probably in the range of $50 million to $100 million a year. They also will add to the cost of pension contributions and long-term liabilities. But estimates for those impacts have not been made public.

Did the CSEA and Cuomo administration also agree on some offsetting cost savings from changes in work rules or the health insurance plan in the latter two years of the contract?  According to an administration official, provisions that become effective without direct changes to the law include health insurance reforms such as increased co-pays and other changes in benefits that will hold net costs to 2 percent annually. Those changes would have to be fairly significant—at the very least, more than negligible—to offset the cost to the state of longevity bonus increases. But until the actual contract language emerges, there is no way to confirm that.

So when members of the state Senate and Assembly inevitably rubber-stamp the CSEA contract implementation bill today, they will have little idea of what they’re actually voting to spend over the life of the agreement.

Then again, embracing fiscal pigs in pokes is standard operating procedure for the state Legislature.

P.S. (June 22) — In response to several informative comments on this blog, the wording and table above have been revised to clarify that CSEA members become eligible for longevity payments only after reaching the “job rate” —so, in effect, the earliest a worker can receive the five-year longevity payment is after a dozen years, etc.

A larger point, however, is being missed by some readers: absolutely nothing in this discussion of the contract, or in previous posts here, has suggested even implicitly that CSEA members in general make excessive salaries.  Some, especially in technically skilled positions, would be paid more in the private sector. But there is, of course, always a trade-off: in exchange for making less, career state workers have much greater job security and can retire at relatively young ages while receiving guaranteed pensions far more generous than commonly offered by privately employers, plus retiree health insurance coverage.  The point of this blog post was to highlight the continuing lack of transparency surrounding state and local government collective bargaining negotiations and settlements.