If Governor Hochul is serious about leading a more transparent administration, a good first step would be to reject the Cuomo-imposed policy that bars agencies from releasing “sensitive” public records until the Governor’s office has signed off.

That rule is in an internal Department of State document from 2018, which the Empire Center obtained. This policy violates the spirit if not the letter of the Freedom of Information Law and has slowed or blocked the publication of critical information, including data about the coronavirus pandemic.

The document, titled “Foil at a Glance,” lays out the Cuomo administration’s procedures for handling FOIL requests—including sending “sensitive” requests to the governor’s office for review and approval.

Factors for deciding whether a FOIL request is sensitive included:

The DOS document provides timelines for handling sensitive FOIL requests. It establishes a four-week process for getting FOIL responses reviewed and approved by the Executive Chamber before release. The timeline contradicts the Legislature’s goal under FOIL that agencies disclose records within five business days. And it expects agencies to provide a written good excuse for not being able to respond to FOIL requests within five weeks. DOS developed a process for sensitive FOIL requests that intentionally ignores the disclosure deadlines under FOIL to accommodate the Executive Chamber’s approval process. 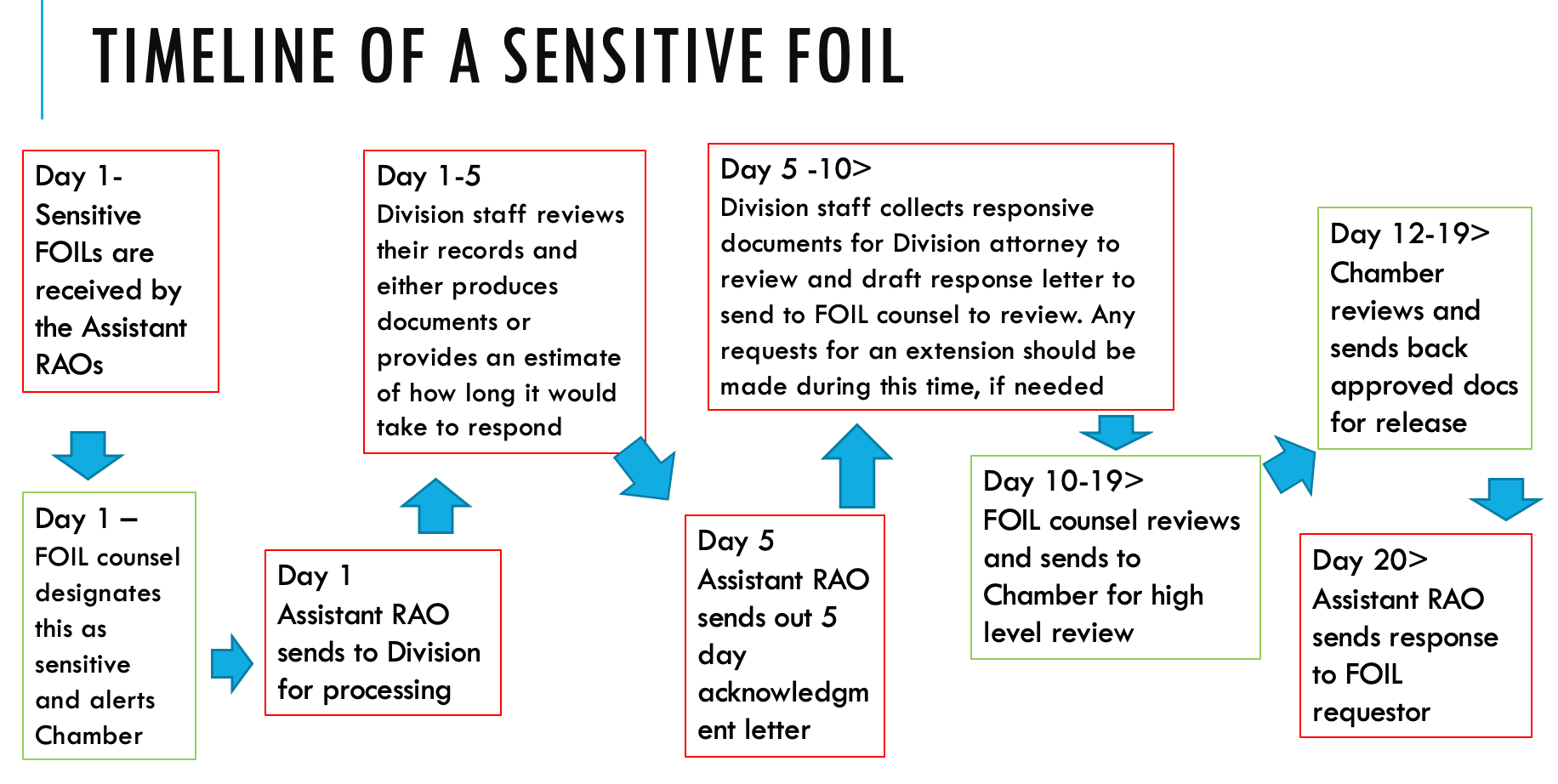 Anyone who made a FOIL request to a New York state agency in the Andrew Cuomo era undoubtedly saw some version of the DOS timeline in responses to their FOIL requests. But usually, the DOS four-week timeline was ambitious. In our experience, state agencies answered very few FOIL requests within a month. The usual response to executive agency FOILs was a letter from promising updates on the status of record searches and reviews at regular 30-, 60-, or 90-day intervals.

To its credit, the DOS FOIL response guide urged staff to check whether responsive records existed within the first five days of receiving a request. If the records were voluminous, DOS encouraged staff to work with counsel to determine a reasonable timeframe for responding to the request. This is consistent with the law. The DOS FOIL guidance and the letter of law raise a question as to the extent the Executive Chamber’s approval process for sensitive FOIL requests caused delay.

The good news is Hochul now claims she wants to get to the bottom of the state’s FOIL responsiveness. In a public address last week, the new Governor also promised she will “direct state entities to review their compliance with state transparency laws and provide a public report on their findings.” More transparency in the transparency process would be welcome. As would an accounting of the full extent of the Executive Chamber’s meddling in “sensitive” FOIL responses over the last decade.

Cameron J. “Cam” Macdonald is an Adjunct Fellow with the Empire Center and Executive Director and General Counsel for the Government Justice Center.