Governor Cuomo repeatedly has said that the state’s unprecedented $5.4 billion cash windfall is a “one shot” that should not be spent on recurring expenses such as school aid or agency operations. Yet his proposed budget language might allow him to do just that.

The Public Protection and General Government Article 7 bill submitted with Cuomo’s 2016 Executive Budget (as amended) identifies three exceptional situations in which the windfall money could be diverted from a newly created Infrastructure Investment Fund into the state’s all-purpose general fund, most of which supports operating expenses.

The first and potentially largest exception could be made in case of “economic downturn,” as measured by three consecutive monthly declines in a “composite index of business cycle indicators” to be compiled and maintained by the Labor Department.

In fact, the state’s existing composite business cycle index—also known as the Index of Coincident Economic Indicators, based on language identical to what’s laid out in Cuomo’s proposed infrastructure fund—actually did decline for three consecutive months at the end of 2014, as illustrated in the chart below. It was the first such drop since the end of 2009. 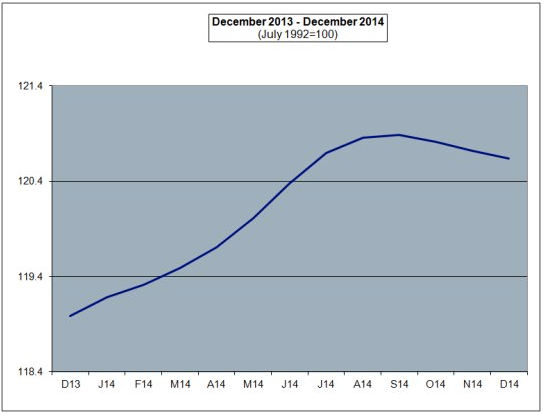 So, if Cuomo’s bill language had been in effect at the start of the year, it would have authorized a transfer from the infrastructure fund into the general fund of “such amounts as the director of the budget deem(ed) necessary to meet the requirements of the state financial plan.” Which could have been a sizable chunk of the money.

This is not to suggest that Cuomo actually intends to play such games. There’s no reason to believe he does. He or his spokespeople surely would deny he has any such intention. But this language is pretty broad—needlessly broad—all the same.

Cuomo’s budget bill also would allow the diversion of settlement cash into the general fund to “prepare for, prevent, deter or respond to” disasters and emergencies, man-made or natural, or to cover shortfalls in projected federal Medicare or Medicaid revenues.

“The proposed structure of the Fund, and proposed appropriations and transfers to and from such Fund, would allow it to be used essentially as an additional undesignated reserve for the State,” said state Comptroller Thomas DiNapoli’s staff report on the Executive Budget.  The comptroller’s report added:

Operational expenditures generally are inappropriate uses of one-time resources. Given the State’s limited resources, shrinking statutory debt capacity and unmet capital needs, it is critical that the State prioritize its use of debt and capital resources – including the (windfall) resources deposited in the (infrastructure fund) – to ensure that they are used as effectively as possible, and with appropriate levels of transparency and accountability.

New York’s current Composite Index of Business Indicators index, featuring 45 years’  worth of data was created as a way of determining when to allow withdrawals from the state’s statutory rainy day reserve fund.  Under current law, that fund can only be tapped after the index drops for five months (which the budget would also change to three months) and it must be repaid within three years. By contrast, any windfall money shifted to the general fund would not have to be repaid, effectively turning the settlement cash into a subsidy source for operating expenses, notwithstanding Cuomo’s pledge not to use it for that purpose.

It certainly would not be a bad idea—indeed, it would only be prudent—to allow the governor to transfer unused settlement cash into the general fund in case of severe economic downturns or emergencies. Indeed, Cuomo already has allocated $850 million out of the total windfall to settle claims by the federal government that New York over-billed the Medicaid program for developmentally disabled patients in state institutions.

But as the comptroller points out, the new cash should not be used to set up an unrestricted reserve. Aside from that $850 million, which represents a use of one-shot money to repay what amounts to a debt, the Legislature should tighten up the allocation language by insisting that any transfer from the infrastructure fund must be repaid, as is already required for the rainy day Fund.

Legislators also should insist that windfall cash do more to displace debt, which will be brushing up against statutory limits in a few years. Incredibly, the governor’s 2016 Executive Budget Capital Financial plan forecasts that the state’s outstanding debt in 2019 will be $517 million higher than was projected less than a year ago in the 2015 enacted budget capital plan, before the windfall materialized.

Injecting nearly $4.6 billion in cash into a heavily leveraged capital plan and ending up with a proposal to borrow a half-billion dollars more over the next four years was a puzzling move on Cuomo’s part—and not a goal the Legislature should embrace.

Changing Cuomo’s windfall spending plan won’t be easy, though. As part of a budgetary power play intended to force the Legislature to negotiate key issues on his terms, the governor used his 30-day amendments to weave appropriations language reflecting his preferred windfall allocations through otherwise unrelated items, essentially making it impossible for the Senate and Assembly to approve their favorite mainstream capital projects (including the transportation capital plan) unless they also are willing to spend the windfall in ways the governor approves of.

* New York’s rainy day account is at an all-time high of $1.8 billion, including a planned deposit of $315 million in surplus cash this year. Nonetheless, at 2.8 percent of general fund spending, the fund is not exactly overflowing. As noted in this 2012 Tax Foundation report:

While there is currently no consensus on how large a state rainy day fund should aim to be, bonding agencies and state budget officials generally target 5 percent as the appropriate amount. If the fund is too large, there are opportunity costs with the funds being tied up in reserve, as well as a worry that it would reduce incentives for careful expenditure planning.