Governor Cuomo’s tax-hike spin machine is in overdrive. The governor just issued an “op-ed” on tax reform that claims the state’s current income tax code “is just not fair,” implying strongly that filers with low-incomes pay taxes at the same rate as millionaires.

Fairness is a subjective concept, but the governor’s op-ed is wildly misleading.

He begins by repeating a favorite canard of the “millionaire tax” proponents:

I have posed the following question to Albany veterans, befuddling almost all: at what income level does the State’s top personal income tax rate become effective? Answers range from about $100,000 to $1 million. Virtually no one guesses the correct answer: only $20,000 for an individual taxpayer; and only $40,000 for a two-earner family. So, in New York under the permanent tax code, an individual making a taxable income of only $20,000 pays the same marginal tax rate as an individual making $20 million. It’s just not fair.

Taken together, these statements are clearly designed to leave readers with the strong impression that the guy making $20,000 and the guy making $20 million are treated the same — that, in other words, the New York State personal income tax is not progressive.  But this is wrong. And any one of the dozens of top-notch tax policy experts working for the governor in his Division of Budget and Department of Taxation and Finance could have told him so.

In fact, New York has one of the most progressive income taxes in the country, as documented in this 50-state study by the respected and non-partisan Minnesota Center for Public Finance.   Check out this table, lifted directly from the report, based on the ratio of taxes paid by married filers in high and low income levels: 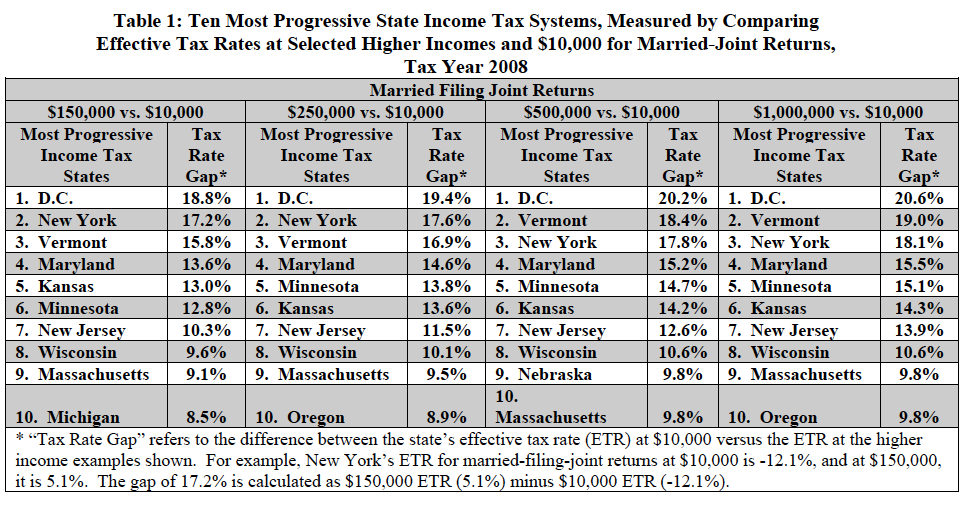 Then there’s this study by the left-leaning Center on Budget and Policy Priorities, which shows how New York’s treatment to flow-income working households is among the most favorable of any state.  In fact, a two-parent family of four in New York doesn’t even begin paying taxes until its income surpasses $40,300.

Middle-class New Yorkers certainly could use a tax break.  The tax code has plenty of problems and needless complexities that need fixing. And it’s good to hear the governor suggesting he’d like to index the tax brackets to adjust with inflation going forward.

But most of Cuomo’s tax reform article is a mix of hype and inaccuracy, designed to make the Legislature and the public more receptive to his push for higher marginal rates — because he wants the revenue in place before he releases his budget in late January.