The multi-year tables in New York State’s just-released Enacted Budget Financial Plan for fiscal 2015 make continued use of Governor Andrew Cuomo’s new fiscal conjuring device: a lump-sum, below-the-line reduction in future projected spending, based on the assumption that the governor will “propose, and negotiate with the Legislature to enact budgets that hold State Operating Funds spending growth to 2 percent.”

The footnote (calling to mind the “magic asterisk” in Ronald Reagan’s first federal budget, which promised “future savings to be identified”) first appeared under the financial plan tables in Cuomo’s Executive Budget in January. It was the basis for the governor’s repeated claim to have turned a huge budget gap into a $2 billion surplus, which never actually entered the realm of fiscal reality. (The general fund surplus for 2013-14 was $625 million, the underlying elements of which are an another story.)

Disregarding the footnote and doing a few simple calculations, the state operating funds gaps under the enacted plan, as traditionally measured prior to this year, are about the same as they appeared in the proposed budget, as shown below. 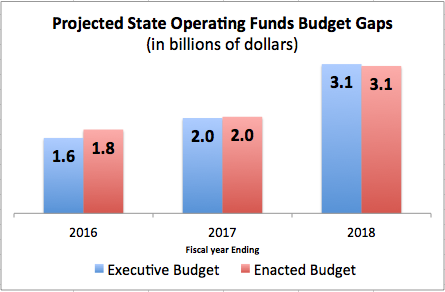 These gaps represent a structural budget imbalance, albeit one that Cuomo has reduced since 2011. If the financial plan went out one more year, to fiscal 2019, the gap would balloon to roughly $6 billion, due to the scheduled expiration in fiscal 2018 of the temporary “millionaire tax” increase in the PIT.

In other words, the state is still on track to spend more than it takes in on a recurring basis, under current law. However, as the governor’s footnote indicates, the gaps could be turned into surpluses if spending growth continues to average 2 percent a year, as opposed to the nearly 4 percent average increase that would occur if the budget was on autopilot. (This year’s state operating funds spending hike is officially 1.8 percent; however, the spending increase is 2.5 percent after adjusting for $344 million in fiscal 2014 “prepayments” of 2015 expenses. In addition, as noted in the preliminary budget analysis from Comptroller Thomas DiNapoli’s office, the budget authorizes more than $500 million in new spending from off-budget accounts.)