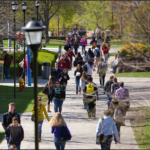 Governor Andrew Cuomo’s “free” tuition plan bore all the earmarks of having been hastily reverse-engineered from a campaign slogan—a Bernie Sanders presidential campaign slogan, that is. Indeed, the governor didn’t try hard to dispel that impression, inviting the Vermont senator himself to deliver an endorsement of the plan when it was first rolled out at a Queens College rally on Jan. 3.

News media reports across the nation initially delivered the kind of headlines the governor must have hoped for, bolstering his claim of sponsoring a “first in the nation” program, available to students from families earning up to $125,000.

On closer inspection, however, Cuomo’s original plan was not nearly as broad and generous as the governor made it out to be. Crucially, it made tuition breaks available only to students taking a full course load of 15 credits per semester and graduating within four years. Even at that, his original $163 million estimate of the fully phased-in cost sounded too low, failing to reflect the rippling impact of higher enrollment on the SUNY and CUNY budgets.

As adopted in the fiscal 2018 budget, the tuition plan has been further limited—including, as the news media today are highlighting, a requirement for students receiving the grant to stay in New York after graduating for the same number of years they received the award (i.e., usually four), or else see the grant be converted into a loan.

On the whole, the more restricted the scholarships are, the better. Here’s why.

Of course, there’s no such thing as “free,” whether we’re talking tuition or lunch. Cuomo’s Excelsior Scholarships program will have to be paid for by a combination of higher taxes—including taxes paid by parents of students attending for “free”—and by higher tuitions for SUNY and CUNY students who can’t or won’t enroll in the program. Indeed, the final budget also authorizes a $200-per-year tuition increase over each of the next four years. Of course, students getting the tuition break will still need to pay room and board if they attend school away from home, which generally costs as much as three times the tuition.

In the adopted budget, the initial appropriation for the program is capped at $87 million, plus $19 million to provide added scholarships roughly half as large to students in private colleges and universities; if oversubscribed, recipients will have to be selected by lottery.

A wide-open entitlement offering “free” higher education for the majority of New York high school grads would have blown a much bigger hole in the budget. It also would have much more severely disrupted a higher education system that includes the nation’s largest concentration of private colleges and universities, more than a few of them now struggling financially, whose students are eligible for other state aid but would have been shut out of Cuomo’s original program.

Cuomo’s underlying premises were that (a) “college is now what high school used to be,” and (b) there’s an affordability crisis, and SUNY-CUNY tuition are at the heart of it. Both ideas are debatable, to say the least.

Beth Akers, a Manhattan Institute senior fellow, noted that the program wouldn’t help the prospective students who financially need help the most.

When it comes to getting low-income students into and through college, it’s the overall cost of attending college that creates a barrier, not just the tuition bill. Low-income students enroll in college at lower rates than their well-off peers, and those who do enroll have lower rates of success at completing their degree. So while helping middle-income families afford college is a laudable goal, it’s difficult to justify it when a gap remains for the neediest students that seems to be preventing them from making needed gains in academic achievement.

To make matters worse for poor students, the governor’s proposal may actually make it more difficult for disadvantaged students to get into college. As the Excelsior Scholarship makes public colleges in New York State cheaper for state residents, more and more students will begin choosing public colleges over private alternatives. If capacity at SUNY colleges doesn’t increase to meet the new demand, colleges will get increasingly selective, which will push the lowest-achieving students, who often happen to be from poorer families, into lower-quality options.

Like all too many important issues, such questions were never explored or debated by the Legislature. Instead, some legislators scrambled to figure out a way to give the governor what he wanted while moderating aspects of the plan that were egregiously unfair to the private sector. Others pushed to loosen eligibility standards for Cuomo’s plan.

Keep in mind that New York’s Tuition Assistance Program (TAP) already spends nearly $1 billion a year to provide a tuition-free ride to low-income students, and a decent subsidy for the near-poor. Moreover, TAP is available to students in private as well as public institutions. But the Excelsior Scholarship program doesn’t just push up the TAP eligibility scale; it’s a completely different program with a design difference that’s also a major flaw.

TAP and other government programs target benefits based on taxable income—which, because it is net of exemptions and deductions relating to family size and living expenses, comes closer to reflecting ability to pay. Such programs also have phase-out ranges, in which the benefit is gradually reduced as income increases above some maximum level.

That’s not the case with Excelsior Scholarships, which when fully phased in after three years will extend eligibility for “free” tuition to all otherwise qualified students from families earning up to $125,000 in adjusted gross income (AGI), regardless of family structure or size (or place of residence in economically diverse New York). There is a sharp cutoff; as the law is worded, if your family’s combined AGI exceeds $125,000 by even a dollar, you are ineligible.

Because of the governor’s desire for headlines treating his program as a blanket free-for-all, the tuition program doesn’t even pretend to deliver aid based on actual need. For example, a middle-aged couple earning $125,000, living in a fully paid-for house in low-cost Syracuse, can send their single child to college for “free.” The exact same option is offered to the oldest of four kids living in Nassau County, whose parents earn $125,000 but often struggle to pay their mortgage and taxes. Two families, two very different sets of living expenses, same benefit.

Parents with incomes close to $125,000 will need to somehow avoid earning a small raise or bonus that would push them even a dollar over the limit. And since the tuition program counts total family income, parents with income close to the limit will also need to discourage their college-bound children from working. It’s a pretty neat trick to craft a college scholarship program that creates a work disincentive for some students and a career advancement disincentive for their parents.

The number of families in such situations will be relatively small, but the existence of such predictable unintended consequences reflects how poorly conceived the program was—all for the apparent purpose of keeping the “free” tuition offer easy to explain, as a matter of political marketing.

Cuomo has hyped a dramatic narrative around the threat of being hit with unfair federal budget cuts, changes to Medicaid and Obamacare, and federal income tax reforms that would cost New York billions of dollars. He said his budget priority was not to overcommit the state financially, and he (appropriately) insisted on getting language in the budget giving him the ability to plan cuts if a Medicaid reduction hits this year.

But the message sent by the “free” tuition is completely inconsistent with this. If anything, it will actually undermine any case he tries to make for better treatment from the feds. Consider:

Cuomo will be demanding federal budget relief from Senate and House members representing states whose public university systems, for the most part, charge higher tuitions than New York’s.  He’ll be complaining to the rest of the country that New York has been unfairly singled out for budget cuts, even while he continues to maintain the impression that the state can afford to offer its high school graduates a tuition-free college education.

State budget shaping up as embarrassment of riches—for now

In budget negotiations, embattled Cuomo is still in the driver’s seat