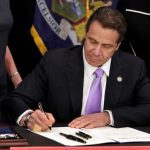 Governor Andrew Cuomo is ending the year on a strong pro-taxpayer note, vetoing union-backed legislation that would have blocked the Nassau County Interim Finance Authority (NIFA) from imposing pay freezes to balance the county budget.

Over the past 40+ years, wage freezes have been an indispensable tool of state financial control boards created to address fiscal crises in New York City, Yonkers and Buffalo, as well as in Nassau County.

The Triborough amendment to the Taylor Law requires New York’s state and local government employers to pay their workers automatic, seniority-based “step” increments even after a union contract has expired. However, state-appointed financial control boards have been able to freeze steps—for up to years at a time—when it has been deemed essential to restore fiscal solvency. Such freezes have survived repeated federal and state court challenges by unions—including, most recently, a lawsuit filed by Nassau County unions in the wake of a three-year wage freeze that ended in 2014.

Rebuffed by courts, the unions mounted a direct legislative attack this year. In mid-May, Assemblywoman Earlene Hooper (D-Hempstead) introduced a bill prohibiting any suspension of steps once NIFA has approved a four-year financial plan. Under the guise of reasonableness, this would have tied NIFA’s hands during fiscal control periods—and, by limiting cost-saving options, might make tax increases or service cuts more likely in times of fiscal duress.

It was clear the measure was greased for passage when a “same-as” version of Hooper’s bill was introduced on June 17, days before the end of the legislative session, via the Senate Rules Committee, signalling the backing of the Republican leadership. Incredibly, the bill ended up passing both the Senate (62-0) and the Assembly (121-0) without a single dissenting vote—a disturbing sign of the Legislature’s weak and pandering approach to public employee union issues in general.

Such a precedent-setting alteration of NIFA’s wage freeze ability would likely open the door for similar statutory modifications to the other presently-governing control boards in the State, and curtail the abilities of any new control board that mau need to be create din the future.

Exactly. This bill didn’t just have implications for Nassau County. It would have set a terrible precedent for current and (potential) future state fiscal control boards all over New York.

Also on Monday, Cuomo rejected a pair of bills that would have created exceptions to the tax cap: one allowing payment in lieu of tax (PILOT) agreements to be considered part of a locality’s allowable “growth factor,” and the other excluding local district shares of capital expenses for regional Boards of Cooperative Education Services (BOCES).

On the surface, the bills appeared to have limited applicability; like the NIFA pay freeze bill, both passed without a dissenting vote in either house. But the governor’s veto message was a strong and solid reiteration of the pro-taxpayer principles underlying the law:

In 2011, I worked with the Legislature to establish New York State’s Property Tax Cap, which establishes a limit on the annual growth of property taxes levied by local governments and school districts to two percent or the rate of inflation, whichever is less. The Tax Cap has succeeded in curbing the growth of local property taxes, resulting in significant savings for taxpayers.

When the Tax Cap was passed, careful consideration was given to protect taxpayers from further significant increases. These bills would run counter to those efforts. First, Assembly Bill No. 1841-A would alter the value of property subject to payments in lieu of taxes (PILOT) agreements for purposes of increasing the tax levy growth factor. By allowing for the inclusion of currently exempt property within the levy growth factor, this bill would increase the base taxable property value in school districts and municipalities, thus increasing the amount they are permitted to raise taxes annually. Not only would this allow school districts and local governments to circumvent the careful balance of taxpayer and governmental interests that now exists within the Tax Cap, but the burden of those additional taxes would fall entirely on the taxpayers not subject to a PILOT agreement, as PILOTs are fixed.

The tax cap is still temporary, effectively set to expire in June 2020 unless New York City rent control laws are extended in 2019. Seven years into his tenure, it’s encouraging that Cuomo still sounds strongly committed to what (if made permanent) would now stand as a truly transformational fiscal legacy.