Compensation and employment trends in the private and public sectors diverged during the Great Recession. And while there has been belated retrenchment in government, the latest federal data indicate the private sector still has a lot of catching up to do in New York State, as shown in this chart. 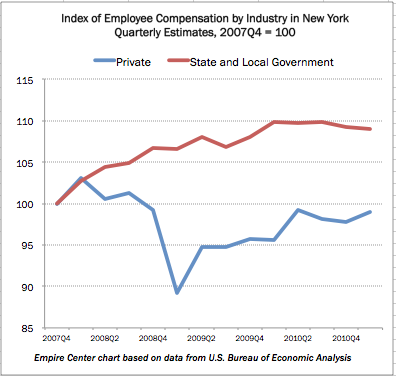 When second quarter data are released in September, they will probably show a further dip in state and local employee compensation (the red line), reflecting announced staff cuts and lower salary increases. The pace of growth in private-sector compensation (the blue line) during the same period will be a key indicator of the strength of the recovery in New York and the nation.

Nationally, state and local government employee compensation is up 6.4 since the fourth quarter, and private sector compensation is roughly equal with the end-of-2007 level.