Here’s a puzzling statistic about New York’s Medicaid health plan: Recipients enrolled in managed care plans use emergency rooms more often, not less, than those in the old-style “fee for service” program.

This flies in the face of conventional wisdom. Fee-for-service Medicaid has been faulted for failing to properly manage controllable conditions like asthma and diabetes, leaving patients to rush to the E.R. when their symptoms reached a crisis stage. Managed care was supposed to change that–and save tax dollars–by ushering patients into reliable primary care.

But the numbers in New York seem to say otherwise. For calendar year 2014, Medicaid managed care recipients used emergency rooms 49.07 times per 1,000 member-months, while the rate among the fee-for-service population was just 34.90–a 41 percent difference.

This is according to data “dashboards” created by the state Health Department to let providers, policymakers, and the public track the progress of Medicaid reform.

While E.R. usage rates vary considerably from region to region–they’re highest in the Tug Hill area of northwestern New York, and lowest on Long Island–the rate for patients enrolled in managed care plans is consistently higher. 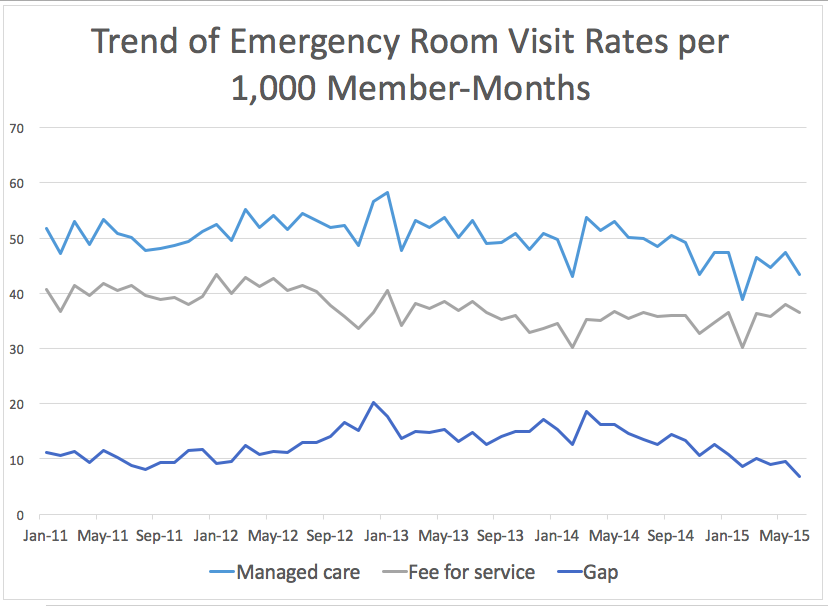 Many people in fee-for-service Medicaid are enrolled only temporarily, because joining a managed care plan is now mandatory for most recipients. Based on data from the dashboards, fee-for-service enrollment accounted for about a quarter of member-months in 2014.

Fee-for-service Medicaid also includes a disproportionate concentration of people in long-term care due to age, mental illness, or other disability. Many live in nursing homes and other institutional facilities, with ready access to medical help, and might be less likely to need emergency rooms for that reason.

The numbers for other Medicaid measures were more consistent with expectations. The primary care visit rate for managed care members, at 286.33 per 1,000 member-months, was more than double the fee-for-service rate.

And the hospitalization rate for managed care, 13.65, was 39 percent lower than the fee-for-service rate.

Since excessive emergency room use is both medically undesirable and expensive for taxpayers, the factors driving the higher rates in Medicaid managed care deserve exploration by the Health Department.

Meanwhile, does anyone reading this have a good explanation?